​Evolution of the Paid Department 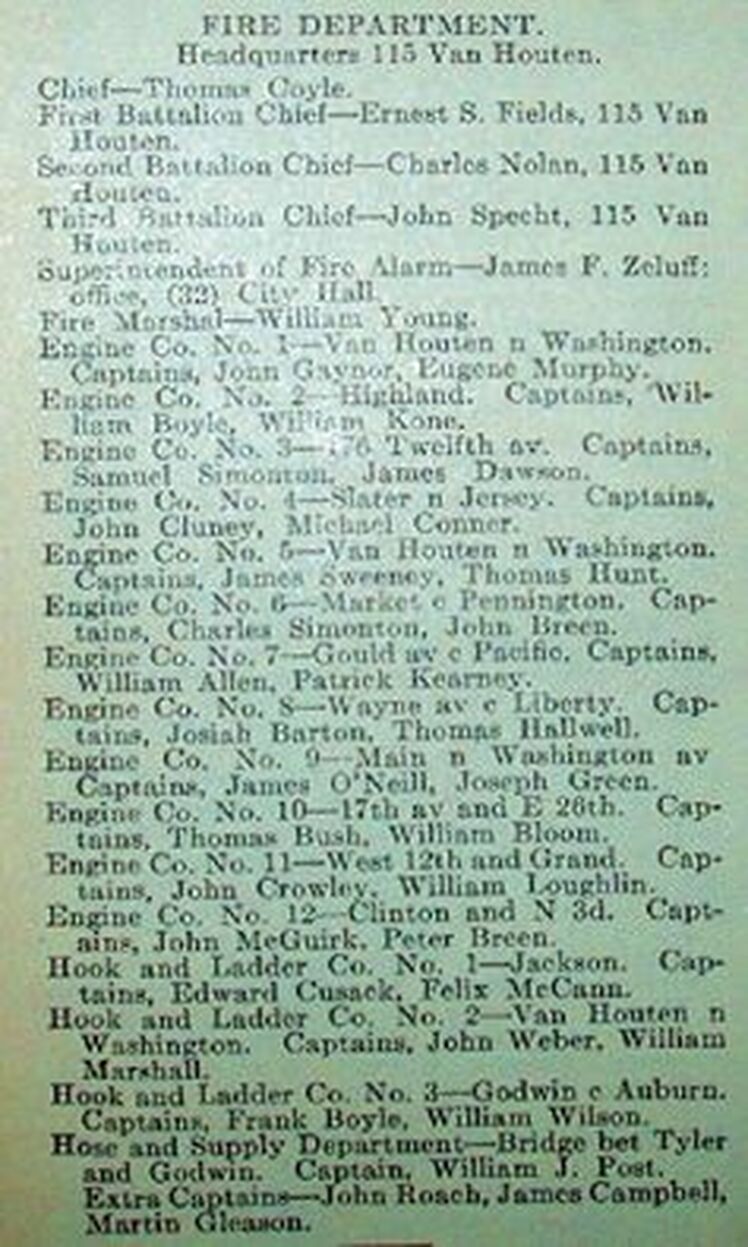 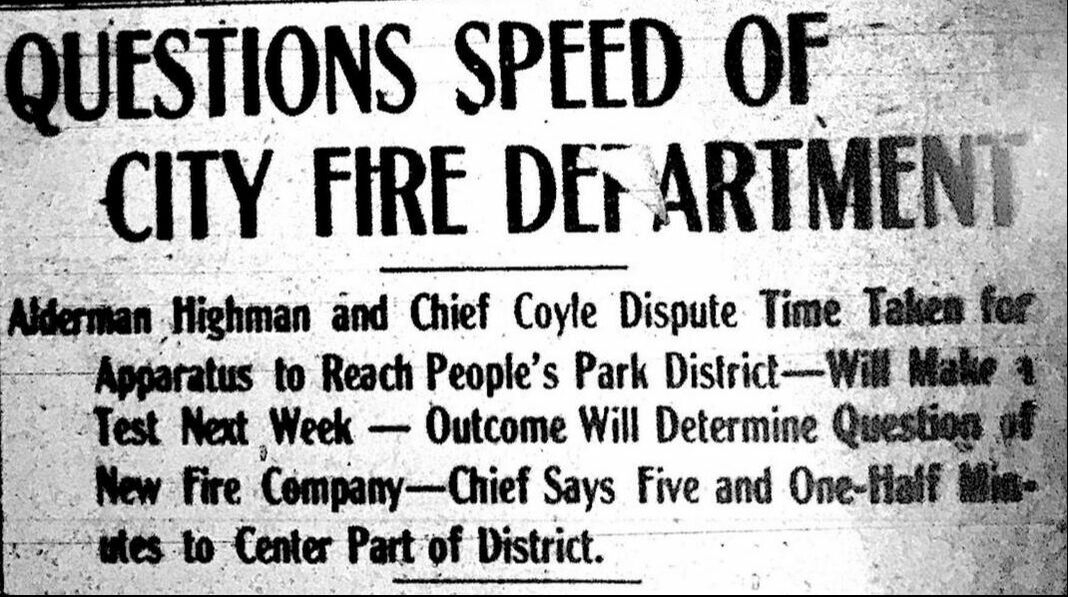 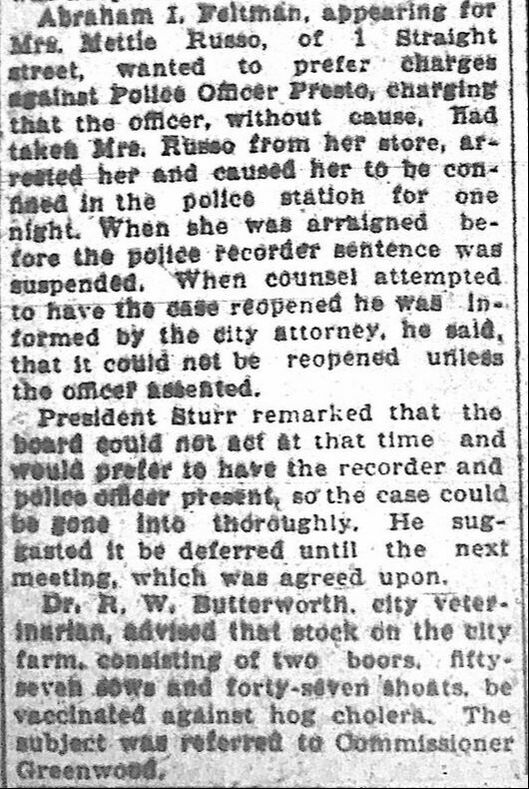 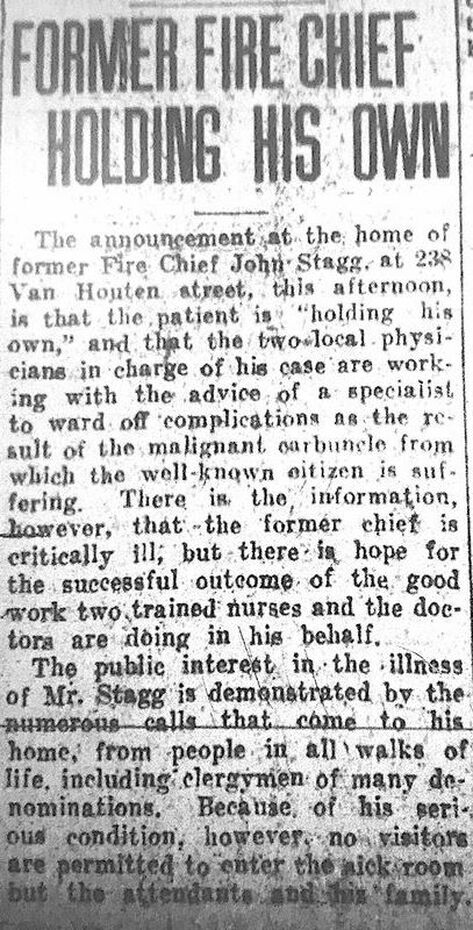 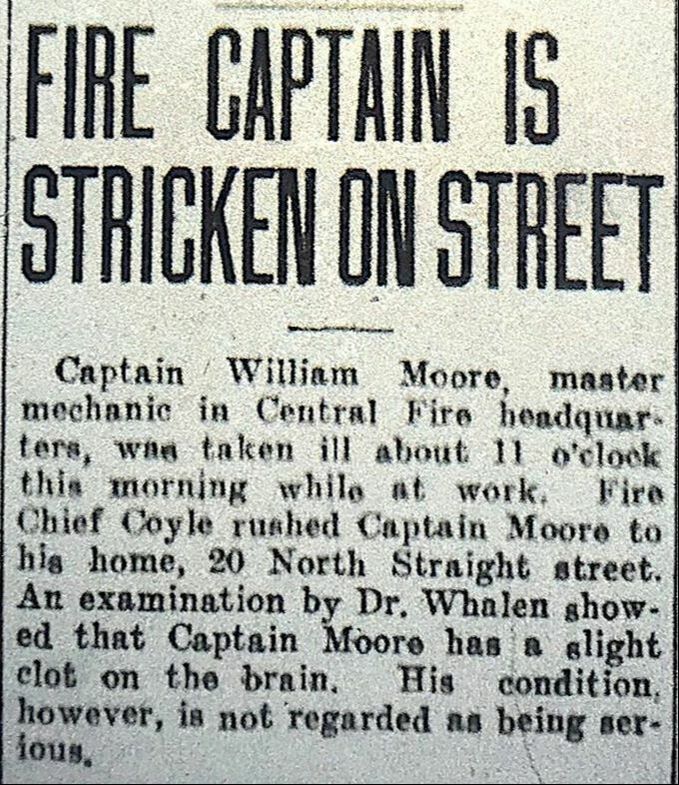 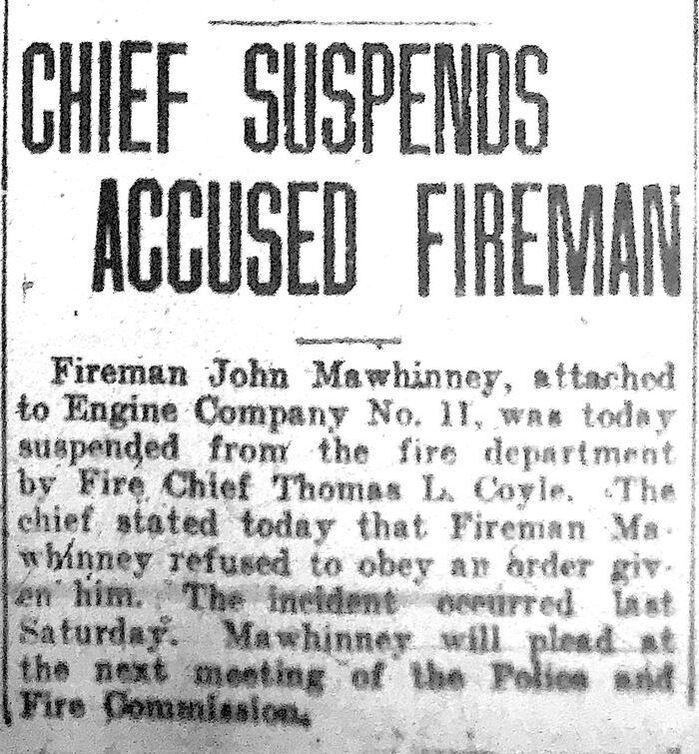 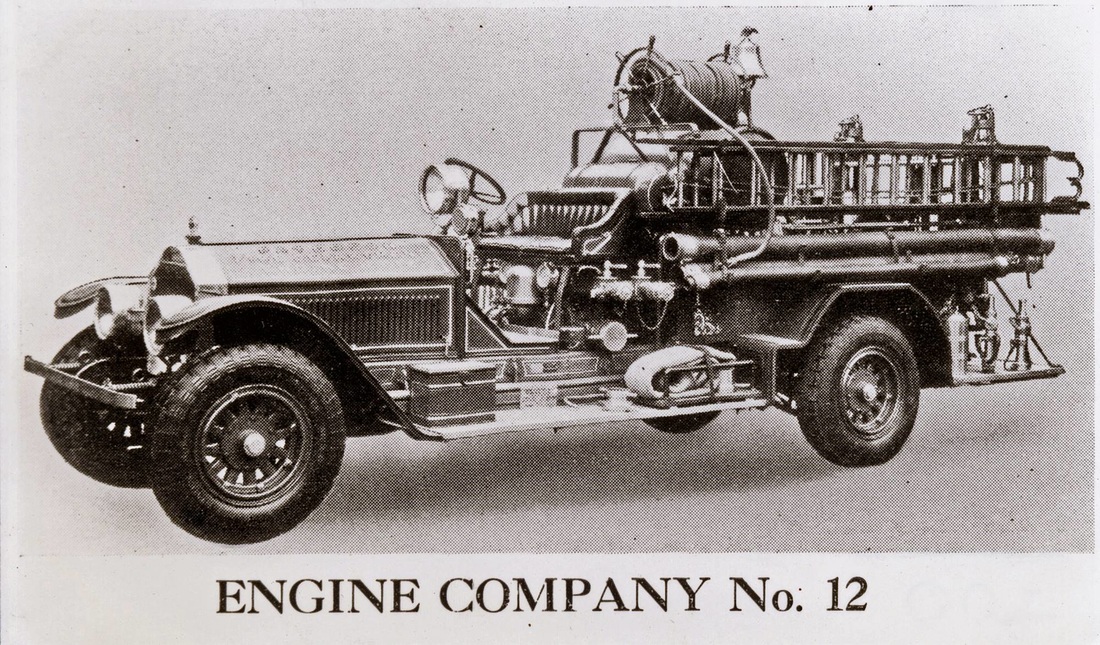 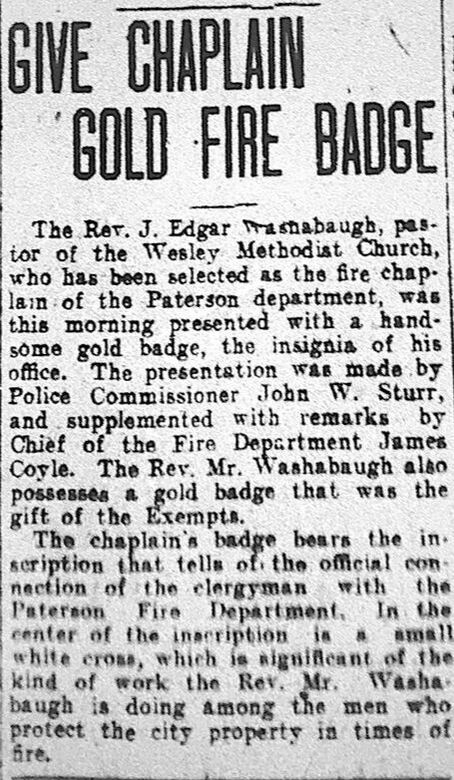 The Morning Call - Courtesy Dennis Morrison
September 23, 1926: The Ahrens Fox Era in Paterson begins with the acquisition of a new 1000 GPM pumper with solid rubber tires which is assigned to Engine Company 5 at 115 Van Houten Street, shown below at a fire scene. 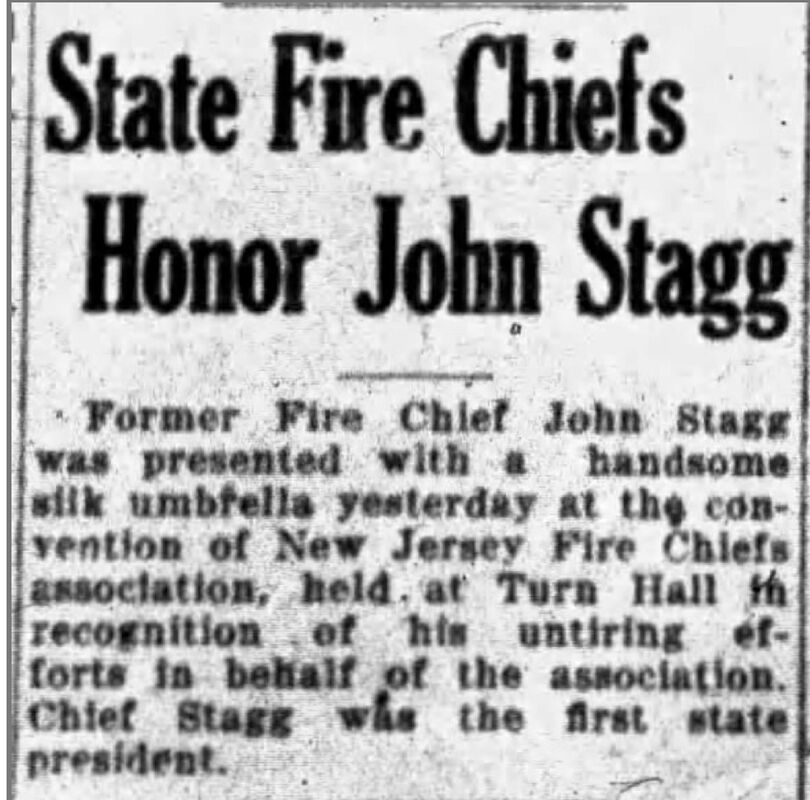 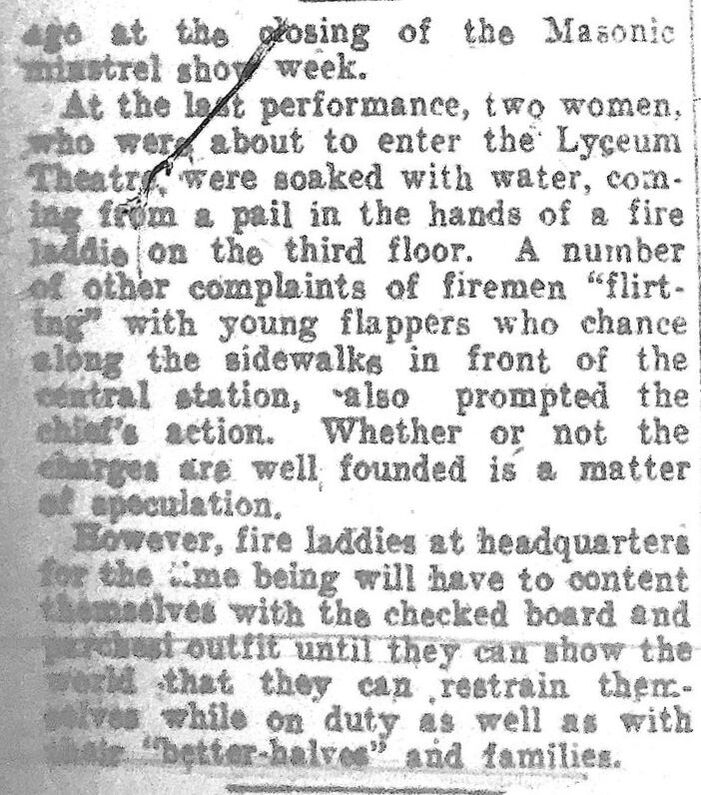 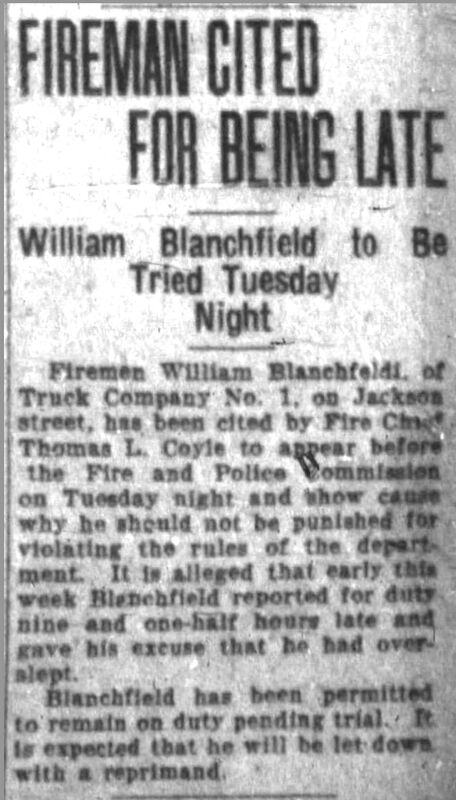 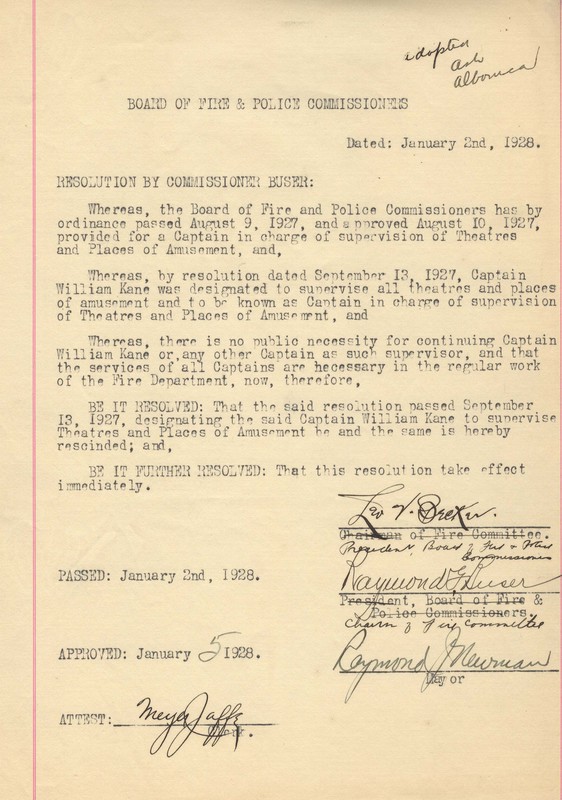 Dayspring Collection
January 2, 1928: Morning Call write-up on Battalion Chief Michael Comer
February 24, 1928: Death of famed Captain Stewart Taylor - a member (joined 1873) and Foreman of Vigilant Engine 6 of the Paterson volunteer fire department who went on to the first Captain of Truck 3 in Paterson's partially paid (1890) and fully paid department (1895)
April 27, 1928: Fireman Edward Tribe and Marinus Baker of Engine Company 4 make the Supreme Sacrifice at a department store fire on Main Street. On December 14, 1928 the Board of Fire and Police Commissioners passed an Ordinance that provided for the payment of an annual pension (not to exceed the salary) upon the death of any member of the Paterson Fire Department where such death was due to injuries received in performance of duty. On December 28, 1928 the Board of Fire and Police Commissioners pass resolutions to provide the widows of firemen Tribe and Baker with a pension equal to their annual pay
​October 20, 1928:  5:30 PM  The first ever 4th alarm signal  was transmitted  from Station 18   (Straight and Governor Streets) at 5:30 PM for the Consolidated Brewery fire. Prior to this, if needed a General Alarm was transmitted after a 3rd alarm. Henceforth a General occurred after a 4th alarm.
December 29, 1928: Pension issues resolved for widows of LODD firefighters

April - November 1930: Four new Ahrens Fox 1000 GPM pumpers acquired and assigned to Engine Companies 2, 1, 7 and 9 (shown left to right below).
April 10, 1930:  F/F of Long Branch travel to Paterson to pick up a retiring apparatus (one of the battery powered steamers) they had purchased, but it was not yet ready for release 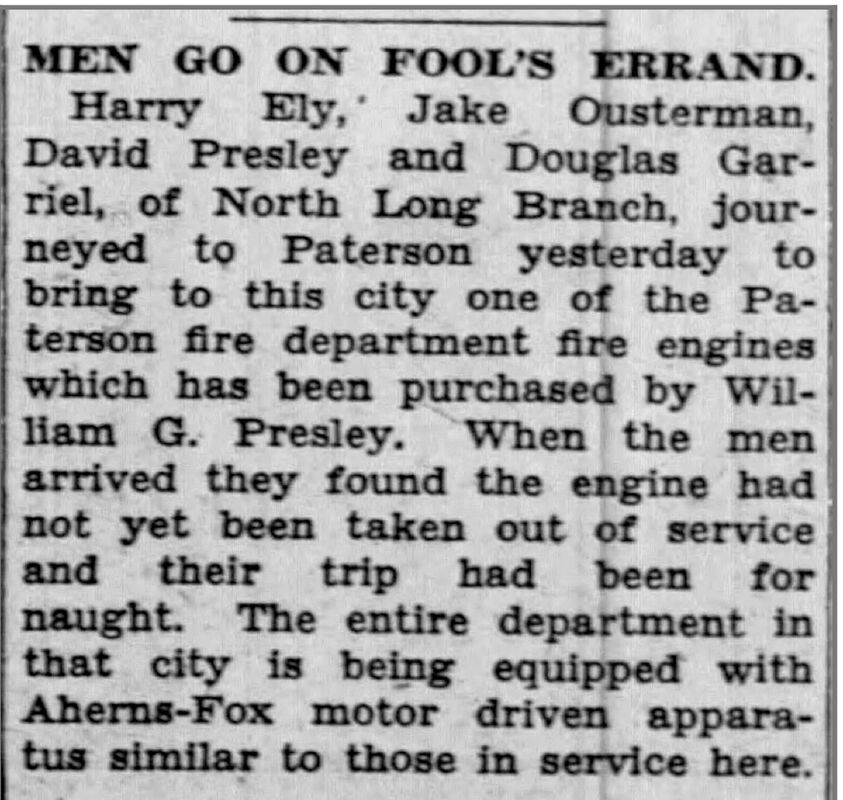 Daily Record of Long Branch - courtesy Dennis Morrison
April 2, 1931: Fireman David Johnstone of Engine Company 8 dies after being struck by a car while carrying a hose at the Manhattan Hotel Fire on March 31, 1931.
May 21, 1931:  Tardy issue and suspension of Fireman James McKelvey 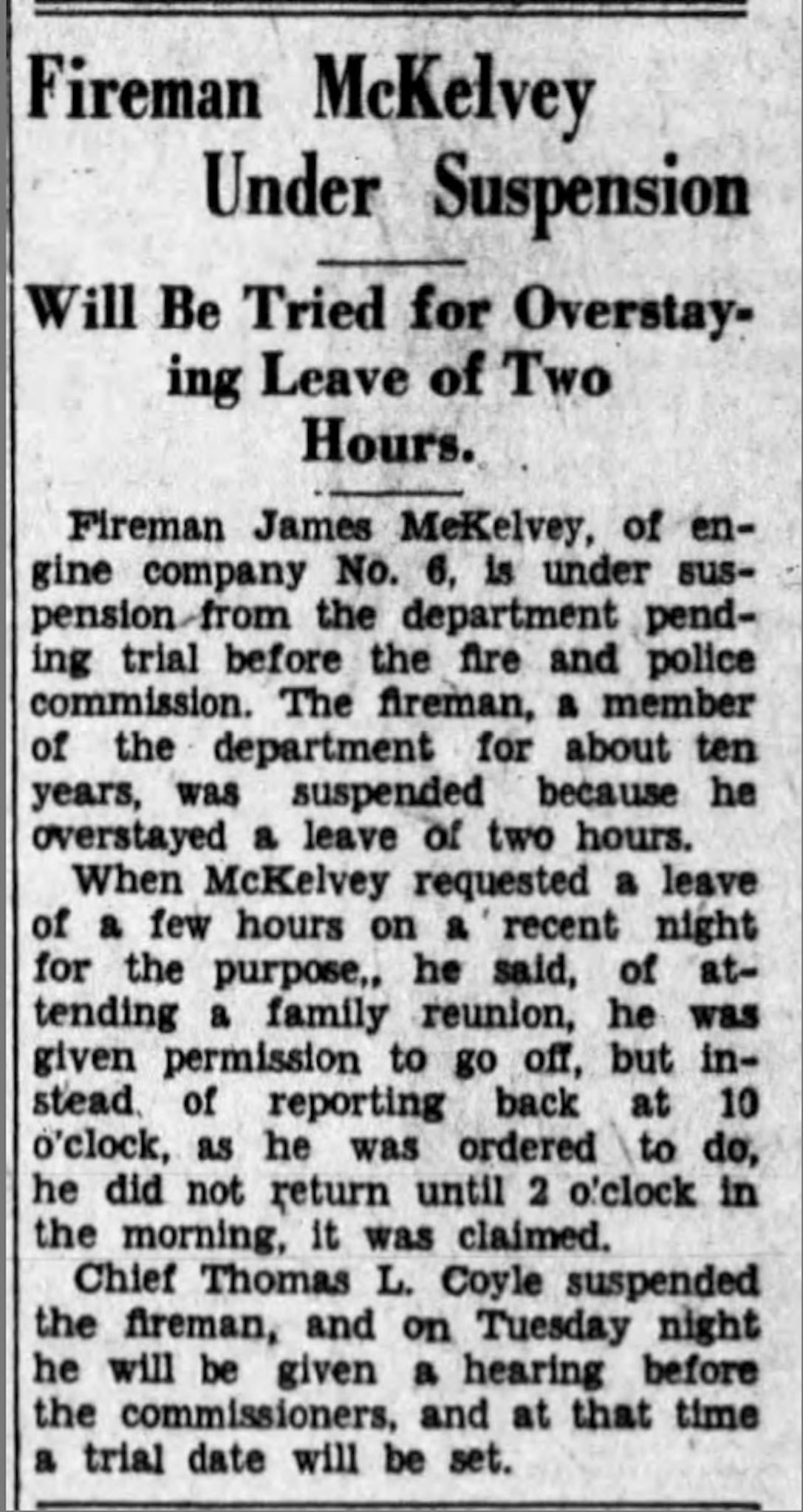 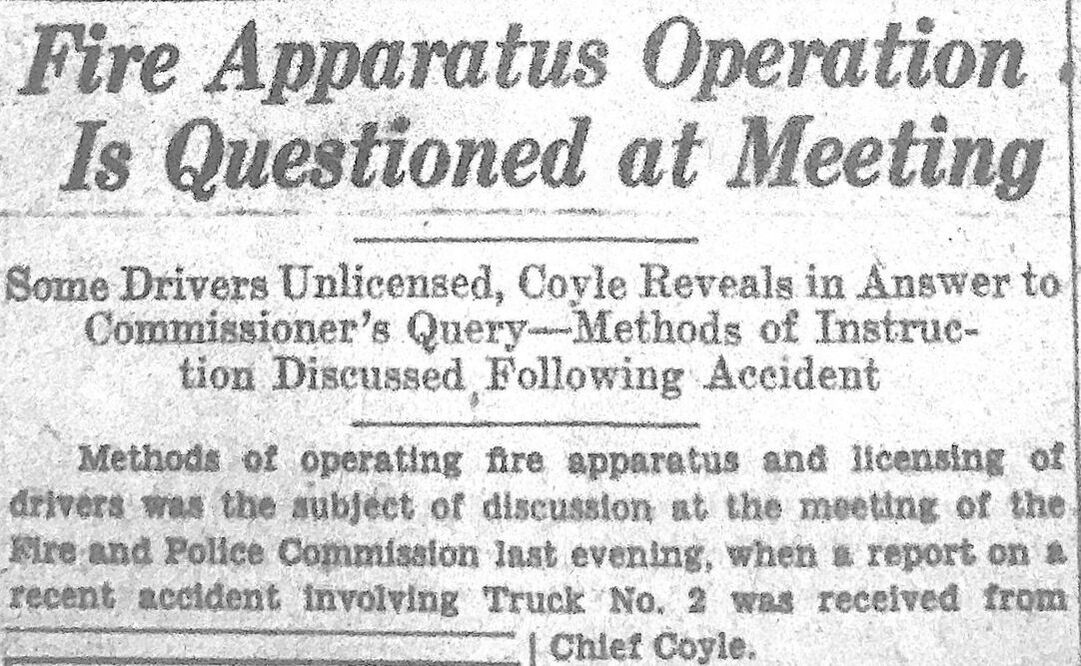 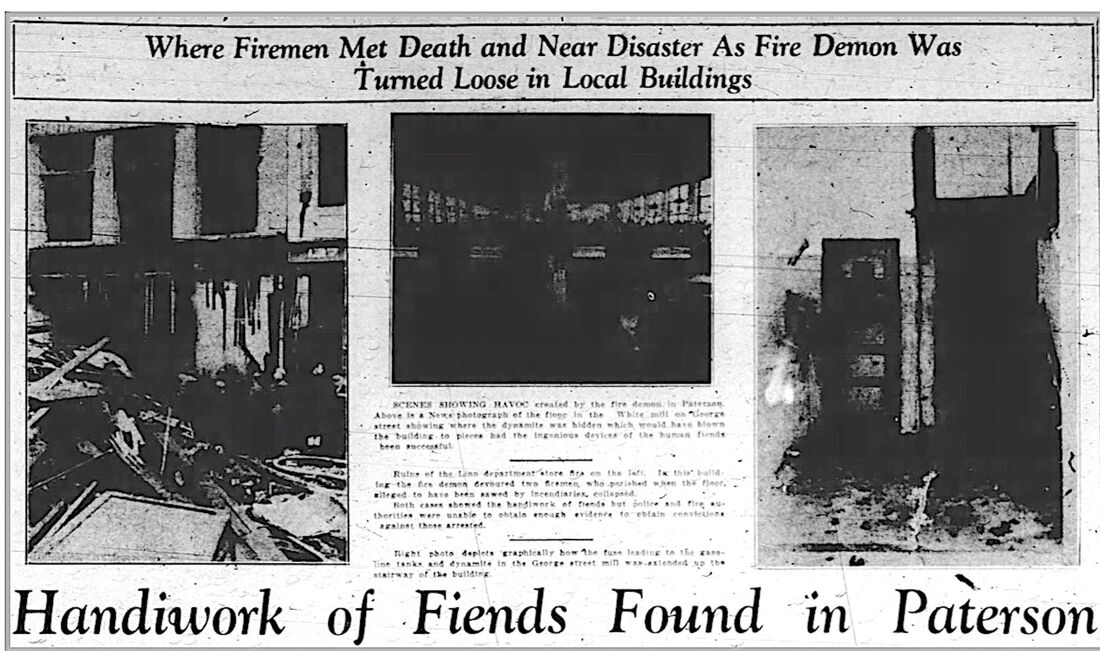 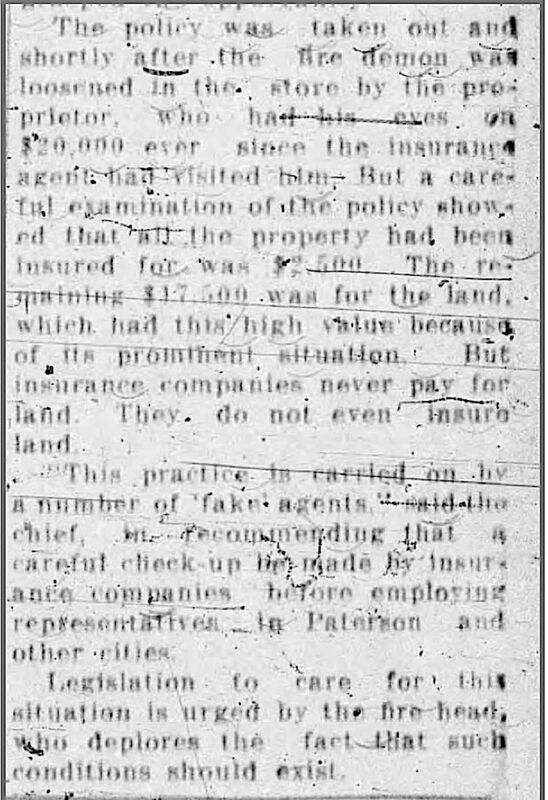 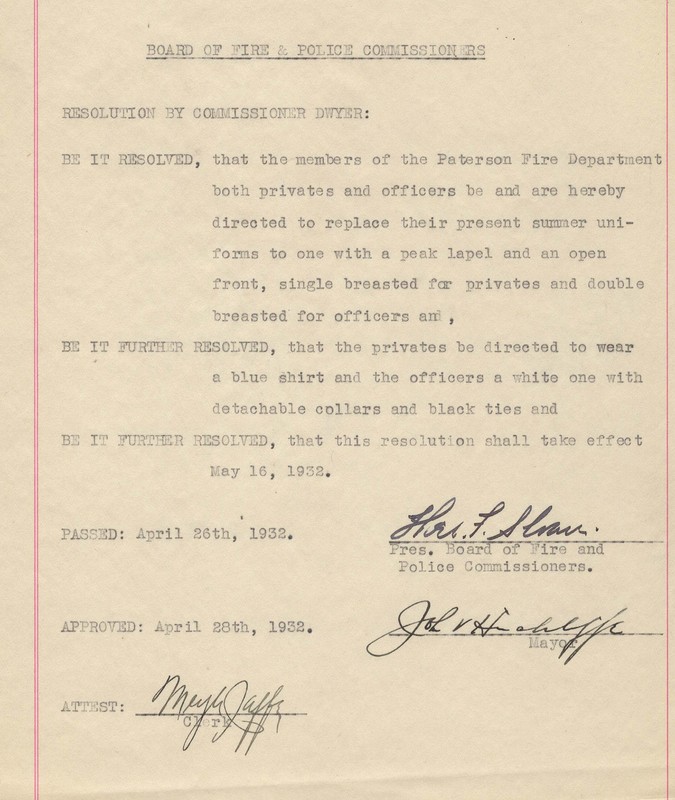 Dayspring Collection
May 26, 1932: The Board of Police and Fire Commissioners order a 10% reduction in pay for police and firemen due to the poor financial condition of the city (Depression years). As seen below the PFD members had agreed to that in March of 1932.
June 1, 1932: Acceptance letters by Chief Thomas Coyle, Battalion Chief Michael Comer, Captain Hobart Strathearn (E9), Captain Edward Cusack (T1)
May 11, 1932: New resolution signed by Mayor Hinchliffe, mandates that all new and current firefighters under age 50 must hold a motor vehicle license. 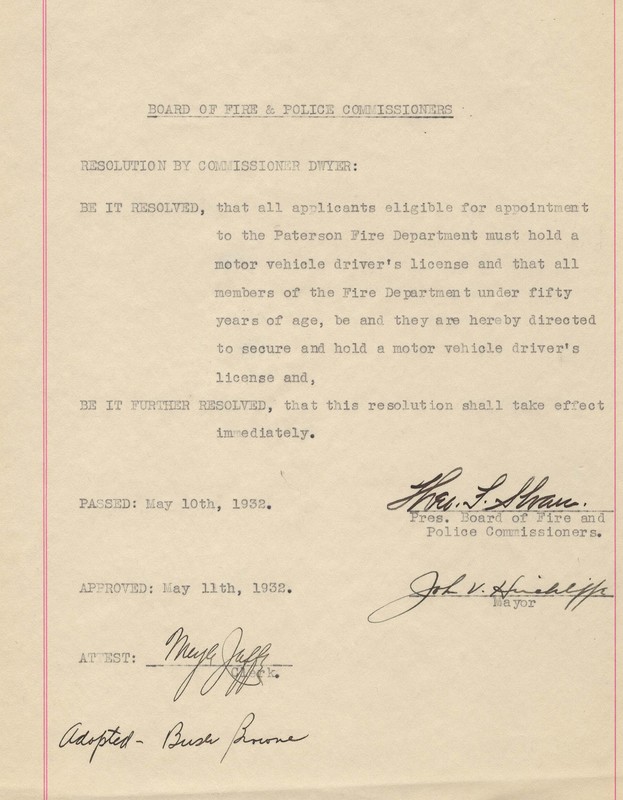 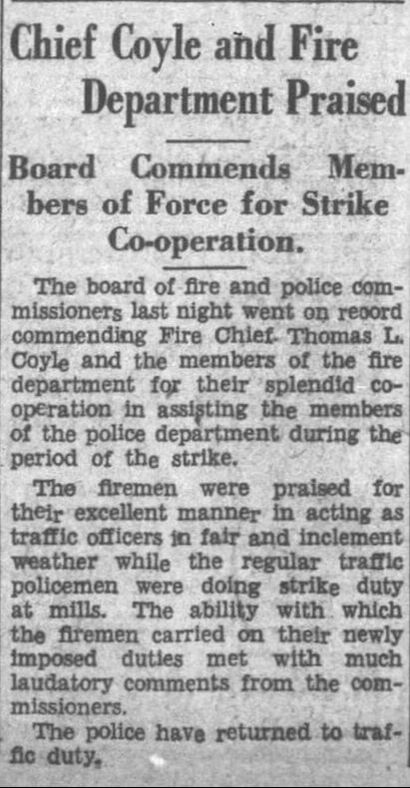 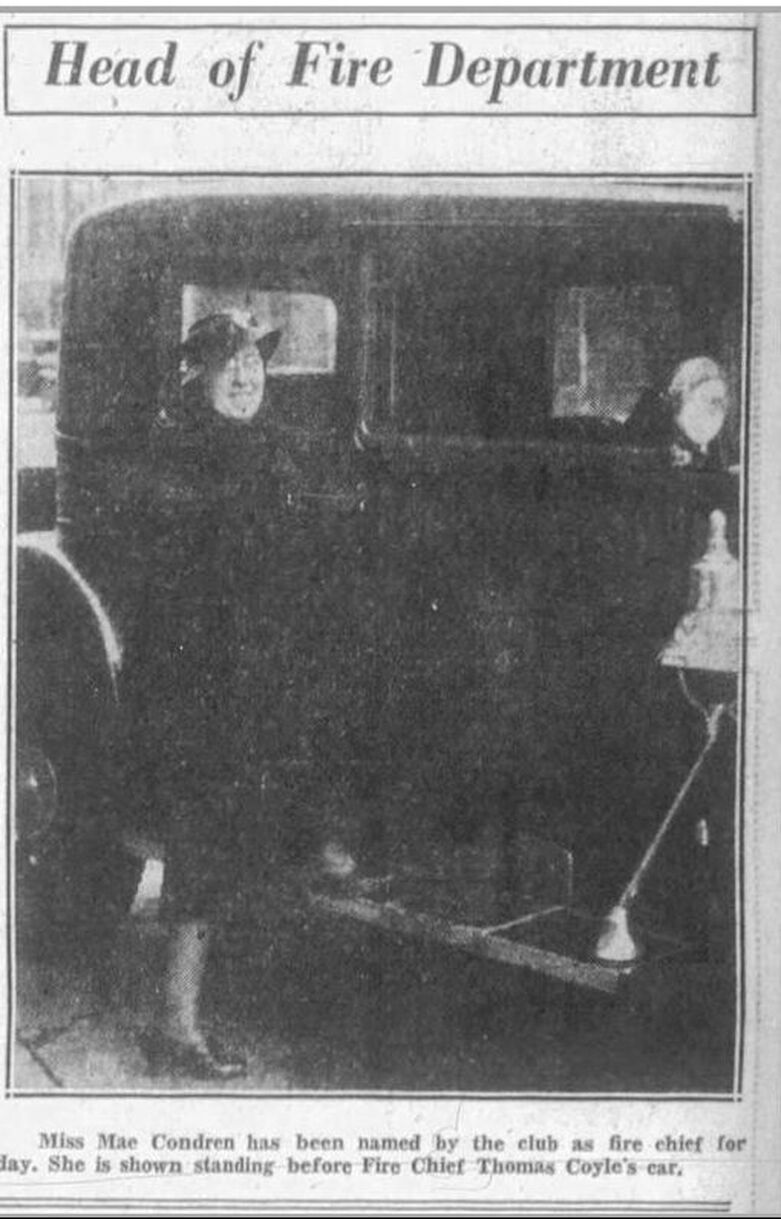 Morning Call courtesy Dennis Morrison
​May 7, 1934: The St. Bonaventure's Lyceum fire fatally injures John P. O'Neill of Engine 9 (died May 8) and Allen Saal of Truck Company 3 (died May 9). Both made the Supreme Sacrifice in a wall collapse.
January 18, 1935: Mayor Hinchliffe statement in the 10thAnnual FMBA Ball Firemen's Booster (during the Great Depression). 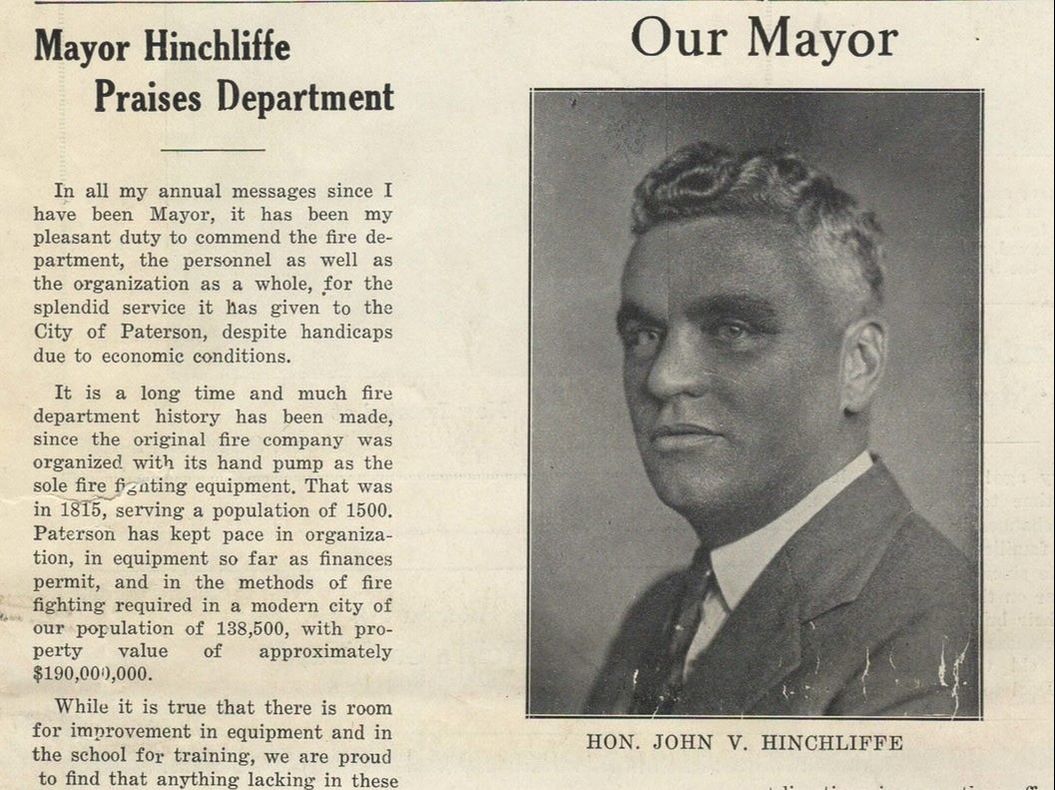 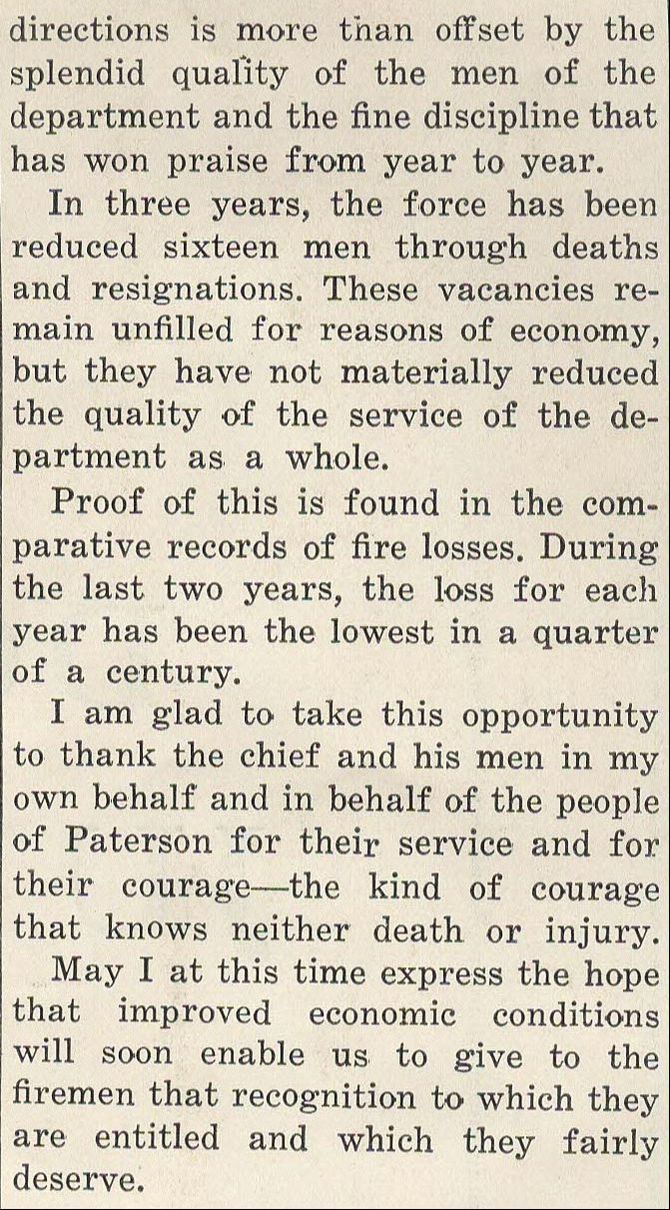 Dayspring Collection
January 26, 1935:  Incident with F/F who were guarding an old River Street Mill which had been converted to a  homeless shelter 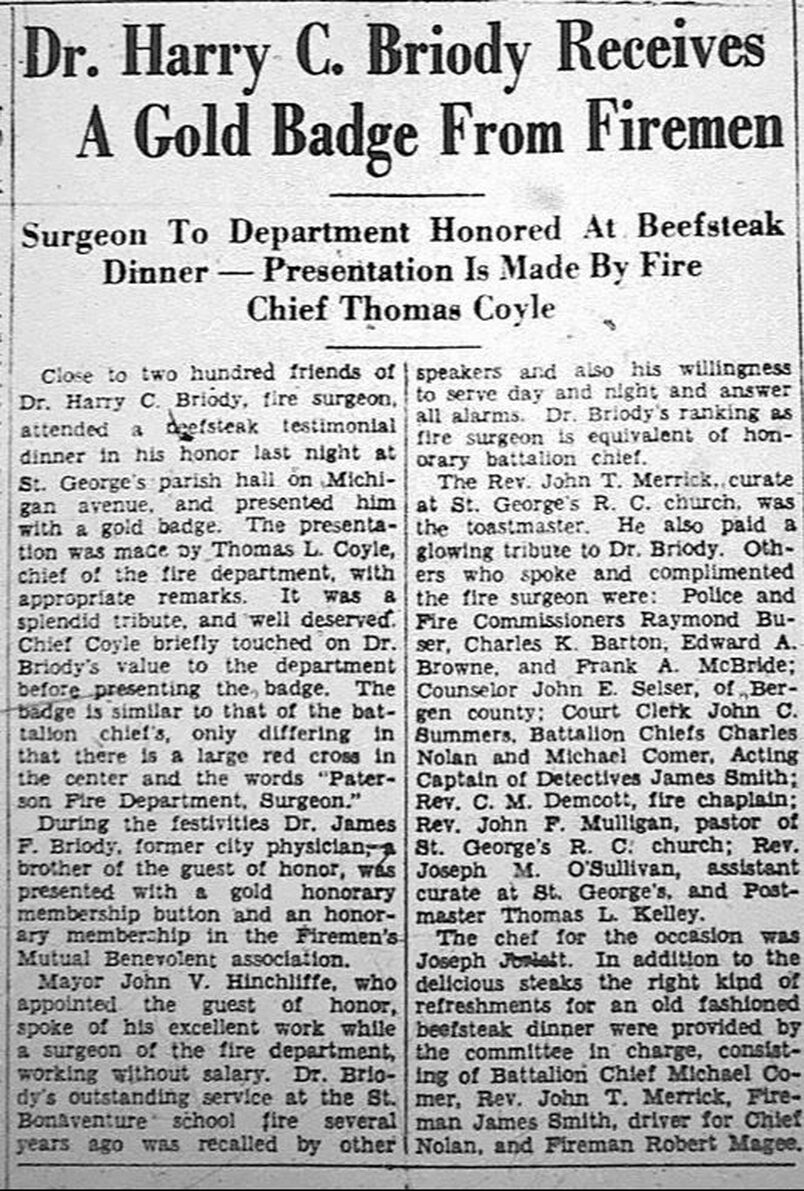 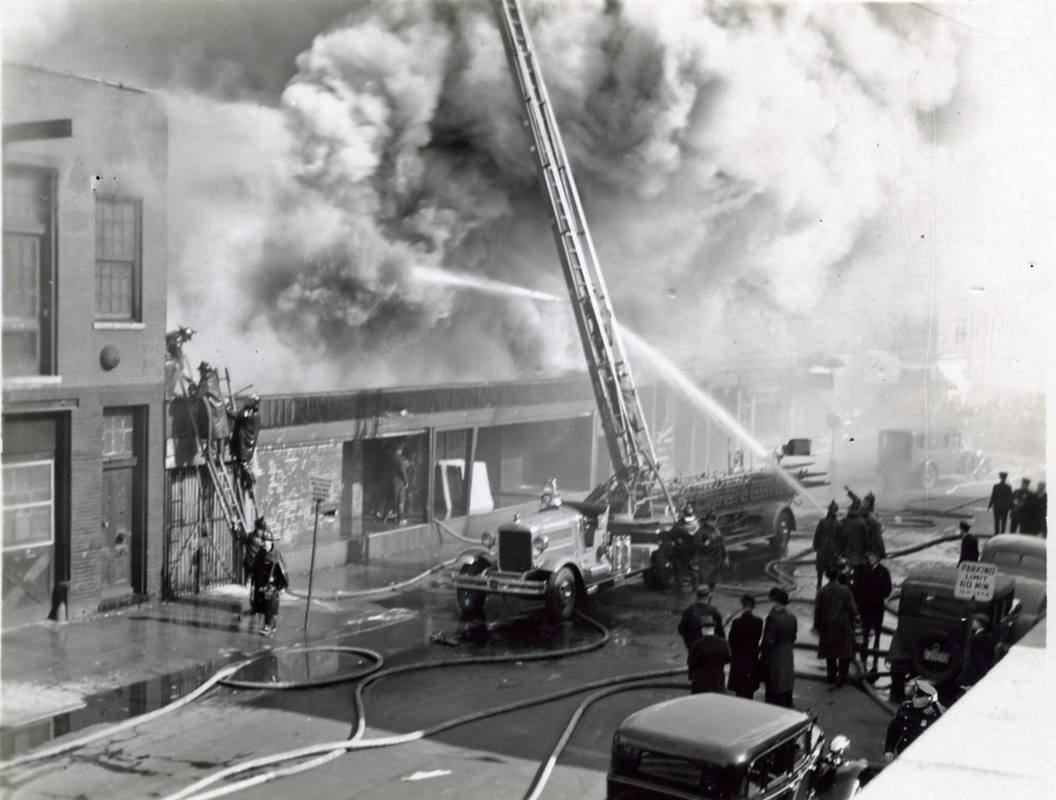 The arrow below points to the upper floors before the collapse 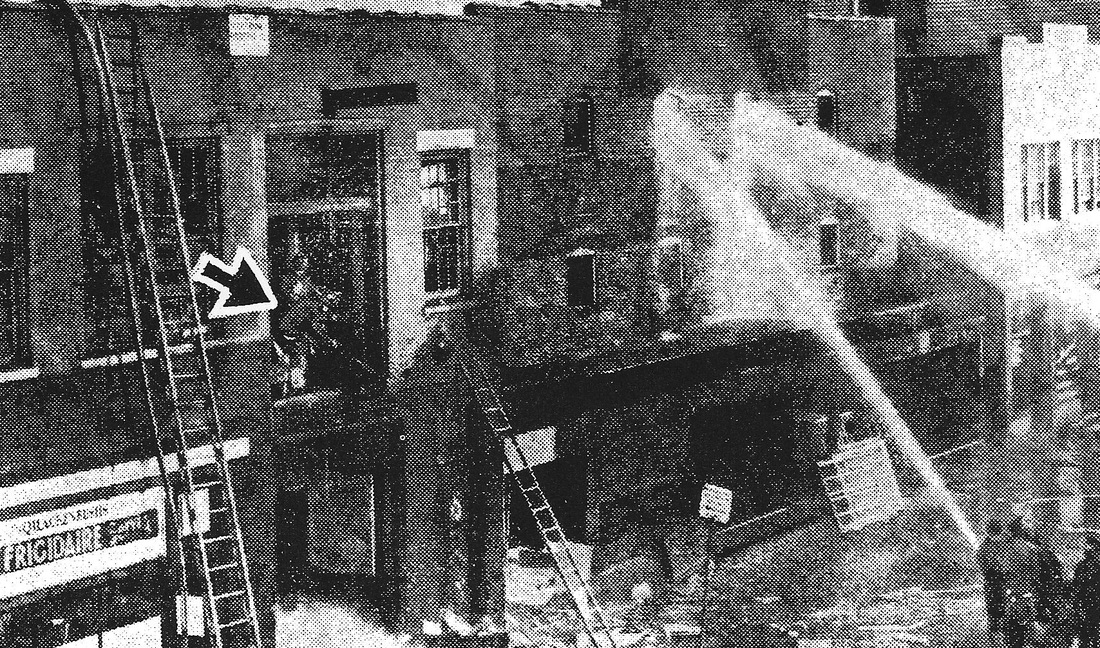 The wreckage of the fallen wall. Note the Fireman's Helmet with a 5 on the shield on the middle left side of the photo. It belong to Fireman William Lynch. The hose that the men were handling is also seen. 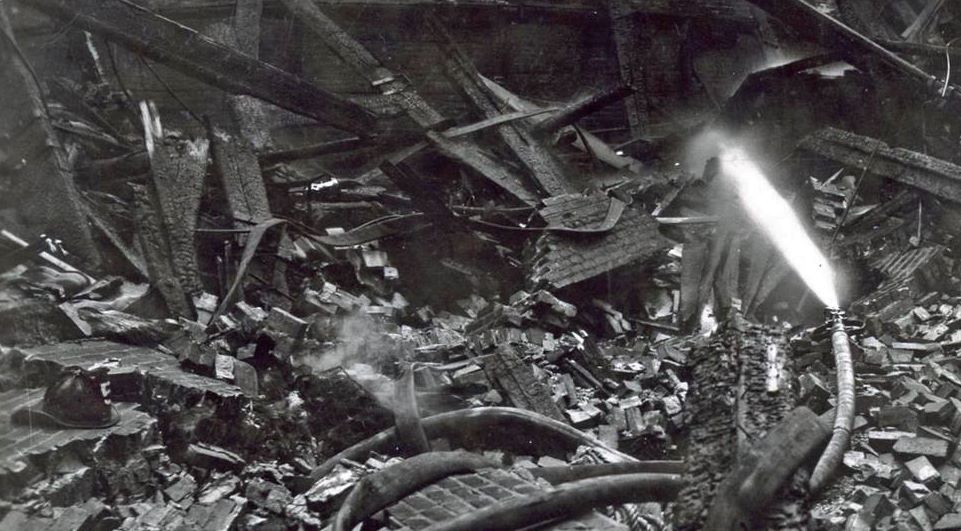 May 5, 1938: Engine 9's Ahrens Fox pumper is badly damaged in a collision with a bus-trolley in front of its Main Street firehouse. The apparatus had to be shipped back to the Ahrens Fox Company for repair  (Click here for full story). 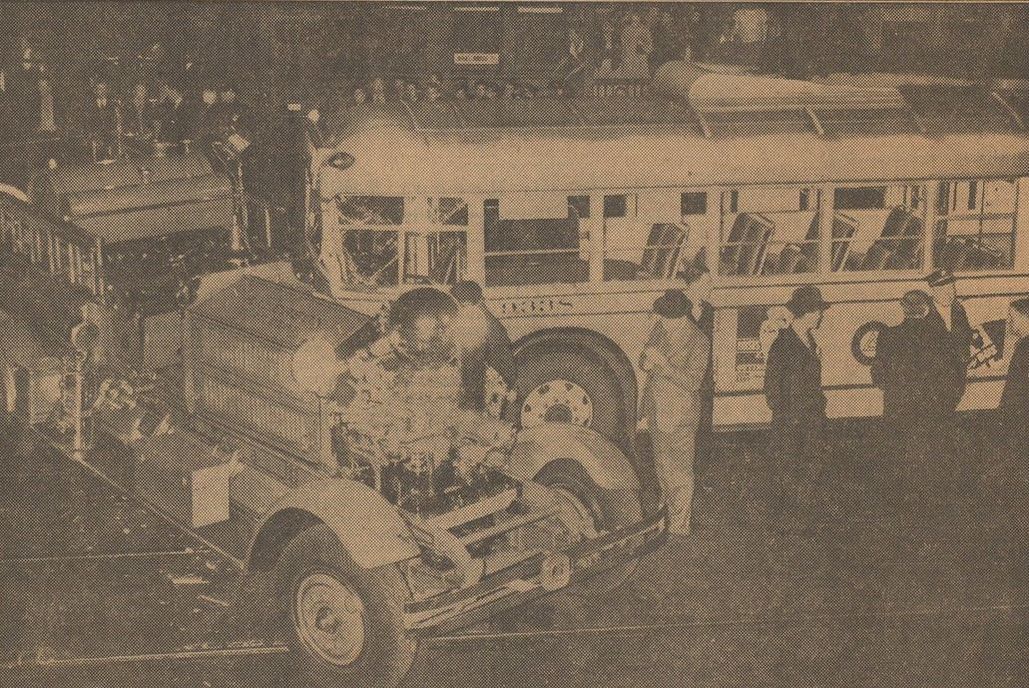