The second Chief of the paid Fire Department at Paterson, N. J., was born in that city December 16th, 1843. Mr. Stagg was educated in the public schools of his native city. In 1857 he went to work in the Guardian office and carried papers for about three years, working all day in the office and carrying papers evenings at a salary of $1.25 a week, but that was considered good pay in those days. He worked in the job department of the Guardian until 1862, when he enlisted in Company A, 11th New Jersey Volunteers. He served with the 11th Regiment as private, corporal, sergeant and quartermaster sergeant until, when before Petersburg in 1864, he was transferred to the First Michigan Cavalry, commanded by General Peter Stagg. He was at once promoted to second lieutenant and soon after to first lieutenant and aid-de-camp on his brother's staff, and served as such in the cavalry raid through the Shenandoah Valley and around Richmond until the close of the war. The brigade was then ordered to Utah on special service and shortly after, in April, 1866, was mustered out. 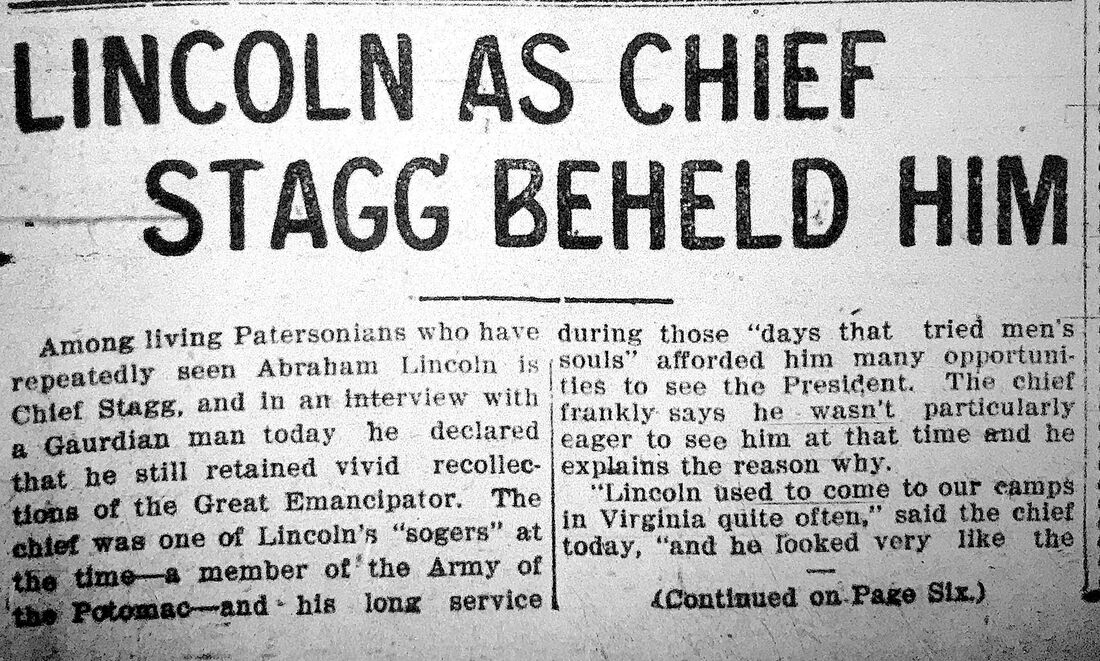 February 12 Guardian courtesy Dennis Morrison
John Gillmore was born in Girvin, Scotland, January 23, 1845, and on October 18th, 1865, he came to America and made his home in Paterson, where he has since lived.
William B. Campbell, a President of the Firemen's Benevolent Association, was born in the Sixth Ward of Paterson in 1856; he is a machinist by trade, and his father was a fireman some thirty years ago, having been one of Washington No. 3's most active members in the "fifties."
Mr. Campbell developed a fondness for running to fires when but a little urchin, and in common with his playmates in the sixth ward the tap of the fire bell was the signal which brought out every boy whose ears caught the sound.

He became an active member of Neptune Engine Co. No. 2 on December 6th, 1876; since that time has been foremost in promoting the interests of his company. He has been honored by his company, having served them as assistant foreman, foreman and president. He holds the last-named position at the present time.

He was elected a representative to the Benevolent Association in April, 1879, and has been re-elected annually since that time, serving on the relief committee for seven years. May, 1888, he was elected president of the Benevolent Association. Mr. Campbell has frequently represented his company in the annual convention of the lire department, and he is looked upon by all his associates and acquaintances as one who is a thorough fireman, with a love for the business that has made him a typical volunteer fireman. After the paid department was organized he became captain of Chemical No. 1.
William Douglas, a Vice-President of the Benevolent Association, was born in Paterson, August 19th, 1853. His father, William Douglas, was for many years an active member of Engine Co. No. 5, and served a term as assistant engineer. The son was a runner with and an ardent admirer of No. 5, and as soon as he had attained his majority (August 18, 1874), he became an active member and has ever since that time maintained a lively interest in the affairs and welfare of the company. He has been the recipient of many honors at the hands of his fellow members, having held every office within their gift except that of treasurer.

In April, 1875, Mr. Douglas was elected a representative from No. 5 to the Benevolent Association and was at once elected vice-president. With the exception of one year (1883) when he was out of town he has been in the Benevolent board and has held every office except that of president and treasurer. The greater portion of the time he has been a member of the finance committee, often the chairman of it, and he is looked upon by his associates as one whose judgment is good and wise. Mr. Douglas has been in the employ of Messrs. E. & H. Adams (cotton and silk manufacturers) after 1870. For the next fifteen years he had been the superintendent of the three mills of the Adams Bros. He had the confidence of his employers to the fullest extent, and he is in every way a credit to the fire department.
​Mr. Quackenbush and one other were the originators of the idea of having a truck company to succeed Cataract Hose Co., whose house and apparatus were burned on the night of November 9, 1888. Mr Quackenbush was elected secretary of that company (which was known as Rapid H. & L. Co. No. 3) when it was organized, and has held that office until the present time, having been appointed call man when the department was changed to a paid system, February 28, 1890.

He was assistant secretary of the Benevolent Association during the years 1881-82, and secretary in the years 1883-84. He was elected secretary of the Benevolent Association when it was re-organized, May 20, 1890, and had also been a member of the finance committee, and treasurer of the Call Men's Association. Mr. Quackenbush was a carpenter and builder and commissioner of public instruction representing the fifth ward, having been appointed ​as a Democrat by Mayor Beveridge, March 28, 1892, for a term of two years. Member of Exempt Association. 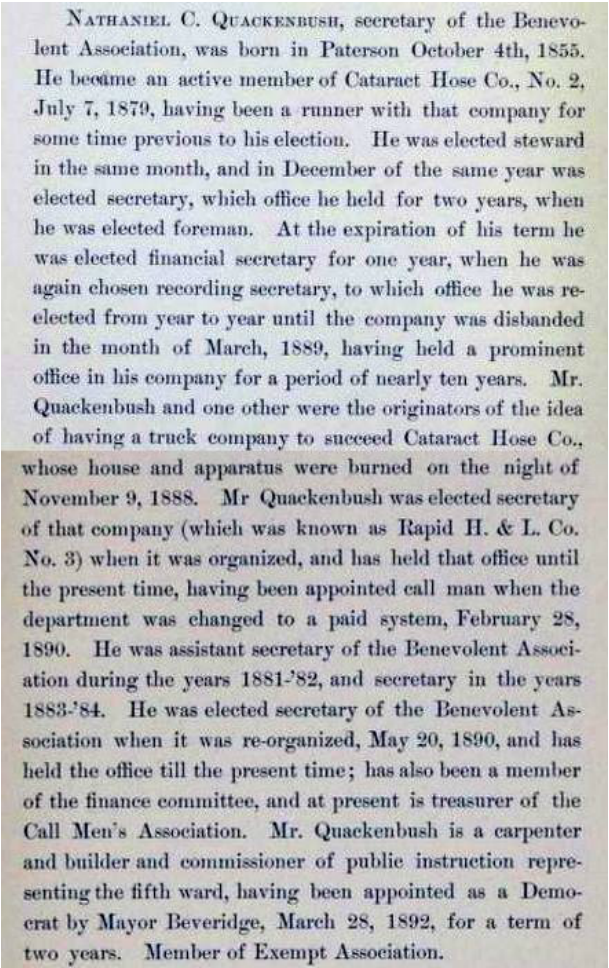 John McKiernan, a treasurer of the Benevolent Association, was born in Paterson, August 18, 1833. He became a member of Washington Engine Co. No. 3, in February, 1852, and was elected treasurer of his company in October, 1855, and was re-elected in 1856. In May, 1859, he was elected foreman and served until May, 1862, when he was elected assistant engineer of the Paterson Fire Department. 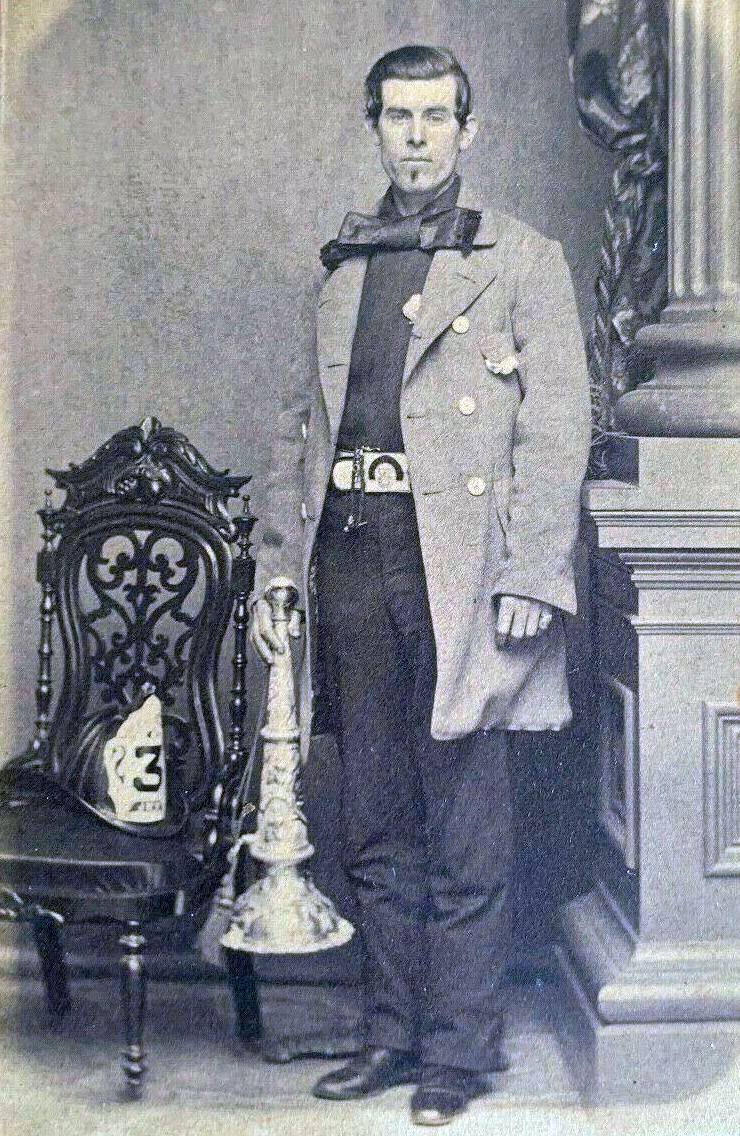 1862 Photo of Foreman. McKiernan
Firemen's Association, and he has been reelected every term since. In November, 1882, at the organization of the Exempt Firemen's Association of Paterson, he was elected as its president, which office he also now holds. He is also president of the Exempt Firemen's Beneficial Association of his department. He has also been president of Washington Engine Co. No. 3 for the past fifteen years.
Mr. McKiernan was among the organizers of the State Firemen's Association of New Jersey. He was very popular in the fire department, and has received all the honors the fire department can bestow. He was often been importuned by his friends to accept offices of a political nature, but had always declined. He was a member of the firm of Doremus & McKiernan, who had a large store. 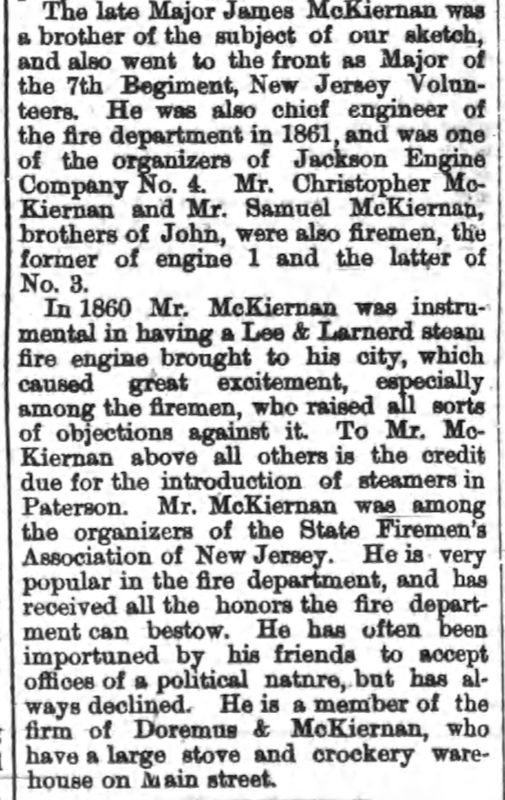 September 20, 1861 - Sword and scabbard presented to Captain McKiernan  - then Chief Engineer of PFD. An inscribed cane also to be presented to General of the Army Winfield Scott

Robert Gledhill, the genial vice-president of the Exempts was in active service in the department from 1863 until 1878, when he took out his certificate. He is the youngest son of one of the oldest residents of Paterson, Mr. Joseph Gledhill, who came to this city in 1817. The subject of this sketch has enjoyed a long and prosperous business career, having started in the drug business in 1848, as clerk for R. T. Creamer, who was then located on the corner of Main and Van Houten streets. It was not long before he became proprietor, and shortly afterward he moved his store to Main Street, and in 1878 sold out his interest to Mr. Kent. Since that time he has not been actively, engaged in business, but has been more or less identified with any movement looking towards Paterson's commercial prosperity. He has filled the measure of his duties as a good citizen by serving four years as School Commissioner, and for two years he was elected representative from Passaic Steamer No. 1. ​ 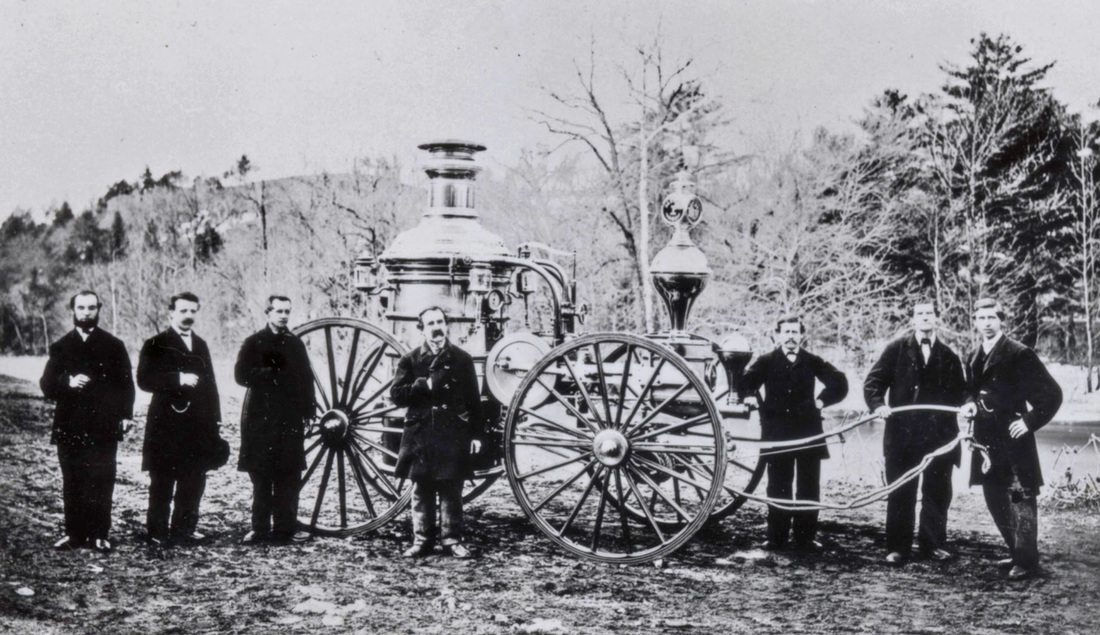 Guardian
John I. Spittel was born in the city of Paterson, January 4th, 1847. He joined the volunteer department in 1868, first becoming a member of Neptune Engine Company No. 2, and served in that company for several years, when he joined Washington Engine No. 3, and remained with them until the starting of the paid department. During that time he held the office of vice-president for five years under President McKiernan, and was elected foreman of the company in 1881. When the association was organized he was chosen as one of the original board of directors and held that position until 1880, when he was elected secretary, and has been re-elected at every election thereafter. 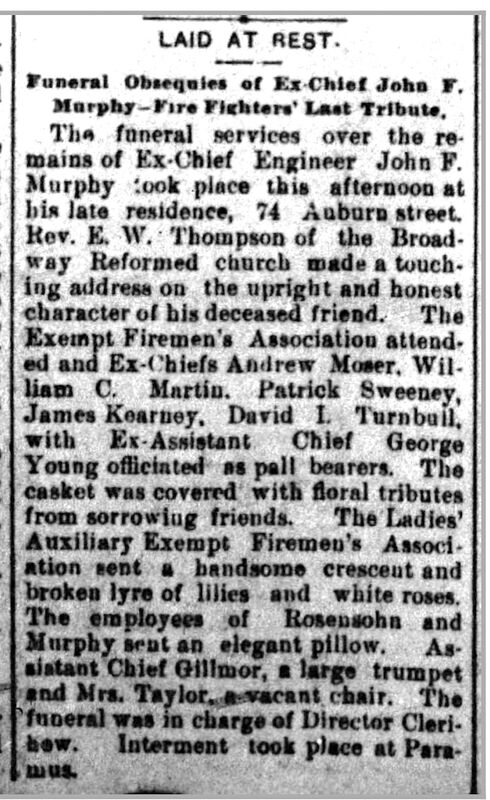 March 8 1897 Morning Call courtesy Dennis Morrison
Major James McKiernan was born in Paterson in 1828. He was one of the organizers of Jackson Fire Co., No. 4 and was assistant foreman and then foreman of the company. In 1861, when the civil war broke out, Major McKiernan was chief engineer of the Paterson Fire Department. He at once enlisted a company of one hundred men, nearly all firemen, and led them to Trenton. The boys elected him their captain and he was mustered in the United States service as captain of Company G, Seventh N. J. Volunteers. He served in the Army of the Potomac and was wounded and taken prisoner June 3d, 1862, at Fair Oaks. He was promoted to be major for gallant service. He served as commander of Farragut Post 28, of this city. He died December 2, 1882, universally lamented.