The Gamewell Fire Alarm Telegraph was introduced in 1872-73
Edward Gore was the first superintendent of fire alarm. ​
CLICK HERE for the complete history of PFD Communications / Fire Alarm
​January 22, 1872:  Demonstration of the Fire-Alarm-Telegraph was held at City Clerk's Office as Paterson like other cities recognized the need for a Fire Alarm telegraph System - For the next 1200 years fire alarm boxes started to appear all over the city
March 1, 1873:  The Gamewell Fire Alarm Telegraph went into service with twenty-three street boxes, three tower bell strikers, six gongs, one three-circuit repeater and seventeen miles of wire. Its location was in the Old City Hall on Washington Street which later became the Police Department. ​

The first alarm ever received via telegraph was Box 25 for a fire at Riverside Hotel. ​
​​ 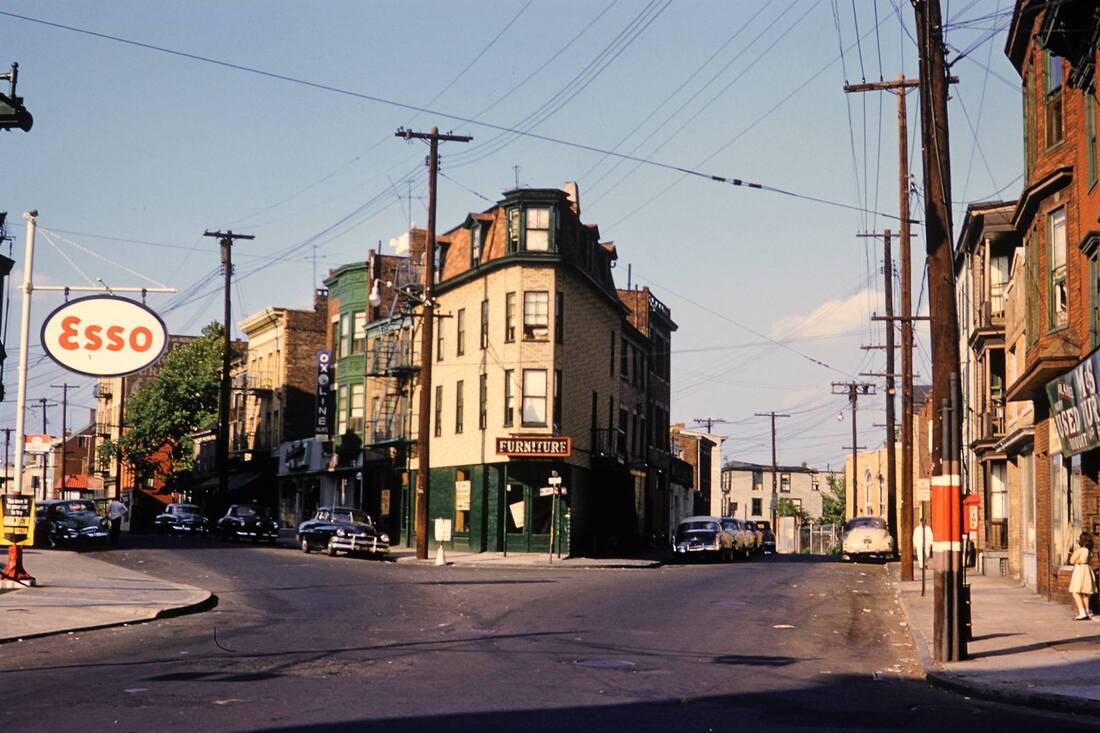 Firebox on pole on Water Strreet
Station 371 14th Avenue and East 27th Street
Restored by Firefighter (East Joliet, IL) & Gamewell Collector Ray Brandolino
Station 162 - Market and Spruce Streets - originally the box for Roger's Locomotive Factory
In above photos, note in bottom of box interior is a telegraph-like transmitter key: a chief officer or captain would use it to transmit a second or third alarm
1948 Gamewell Advertisement and a Paterson Gamewell Box circa 1948 (Station 162)
Below are Boxes 359 from Union and Linwood Avenue and 376 from Park Avenue and East 29th Street
Station 8112: Master Box for St Joseph's Hospital -- 8112 was the property lot # for the hospital. Station 263 was the street box 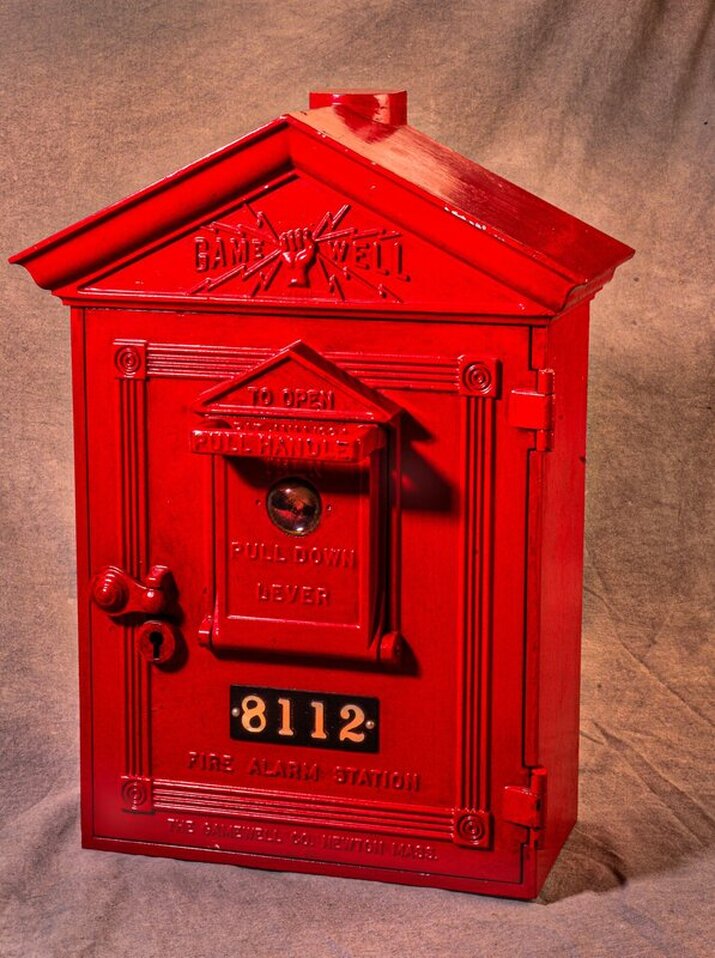 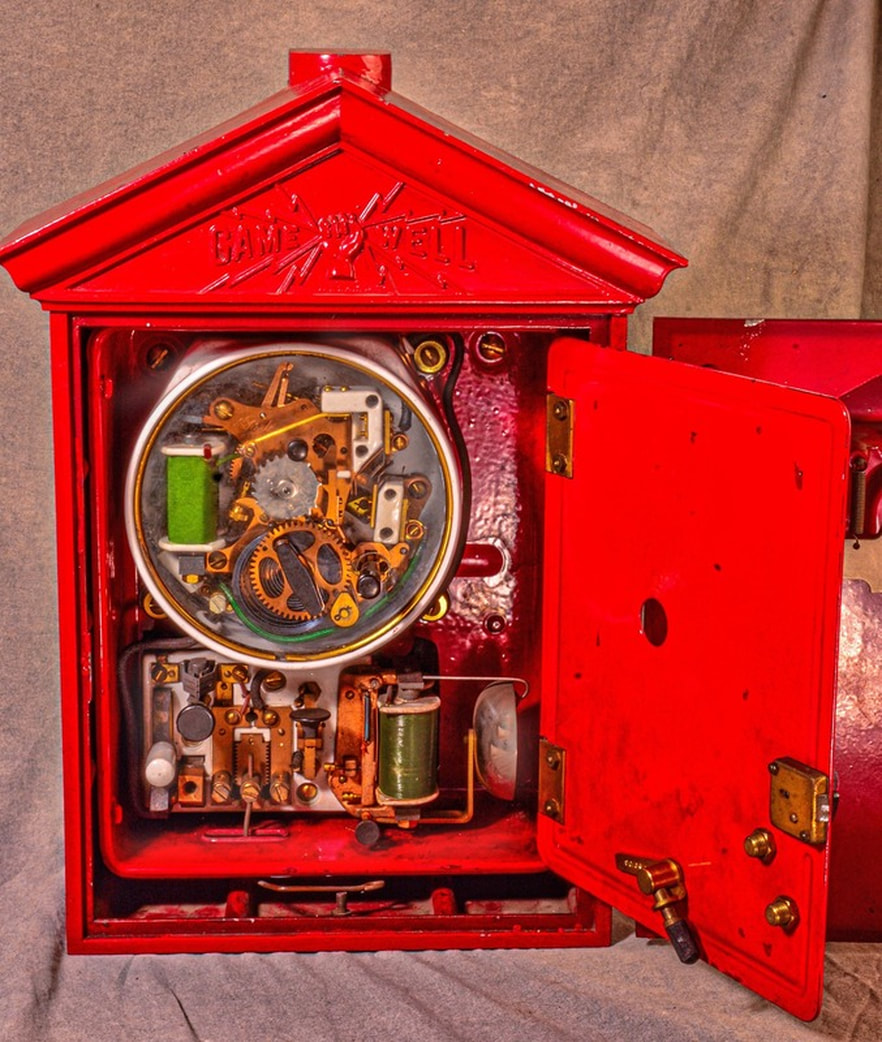 Below left is the Gamewell Stanchion that stood at the intersection of Main St and Broadway, beneath the Port Arthur restaurant. Unique were "street strikers" which consisted of a fire gong that sat on top of the stanchion (the actual one is at right). This alerted policemen directing traffic in downtown Paterson to know that apparatus would be coming by. The entire stanchion shown below is at the NJ Firemen's Museum in Boonton, NJ. 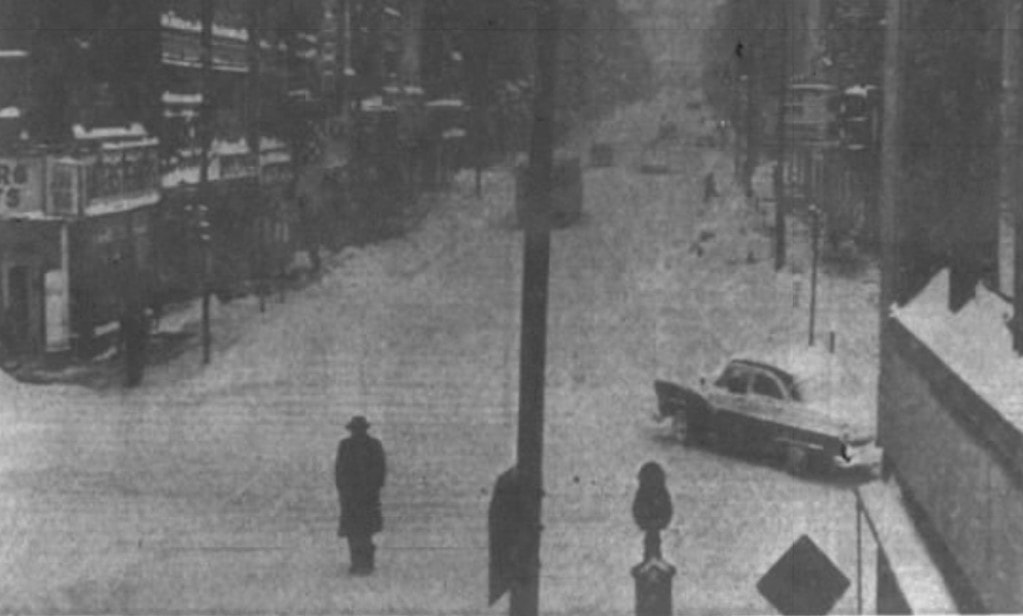 Station 5451 at Main Street and Broadway - top of stanchion at bottom
March 10, 1910: Three such stanchions were installed in downtown Paterson 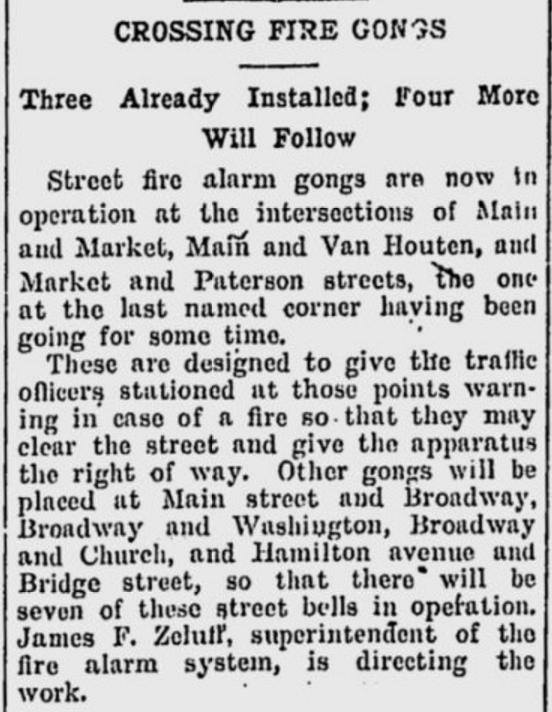 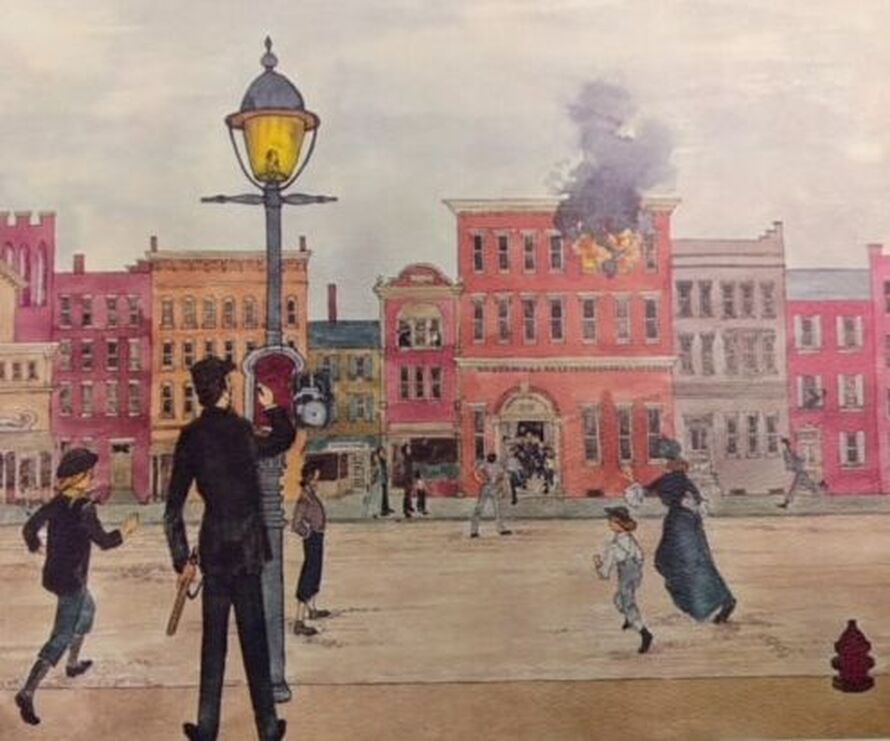 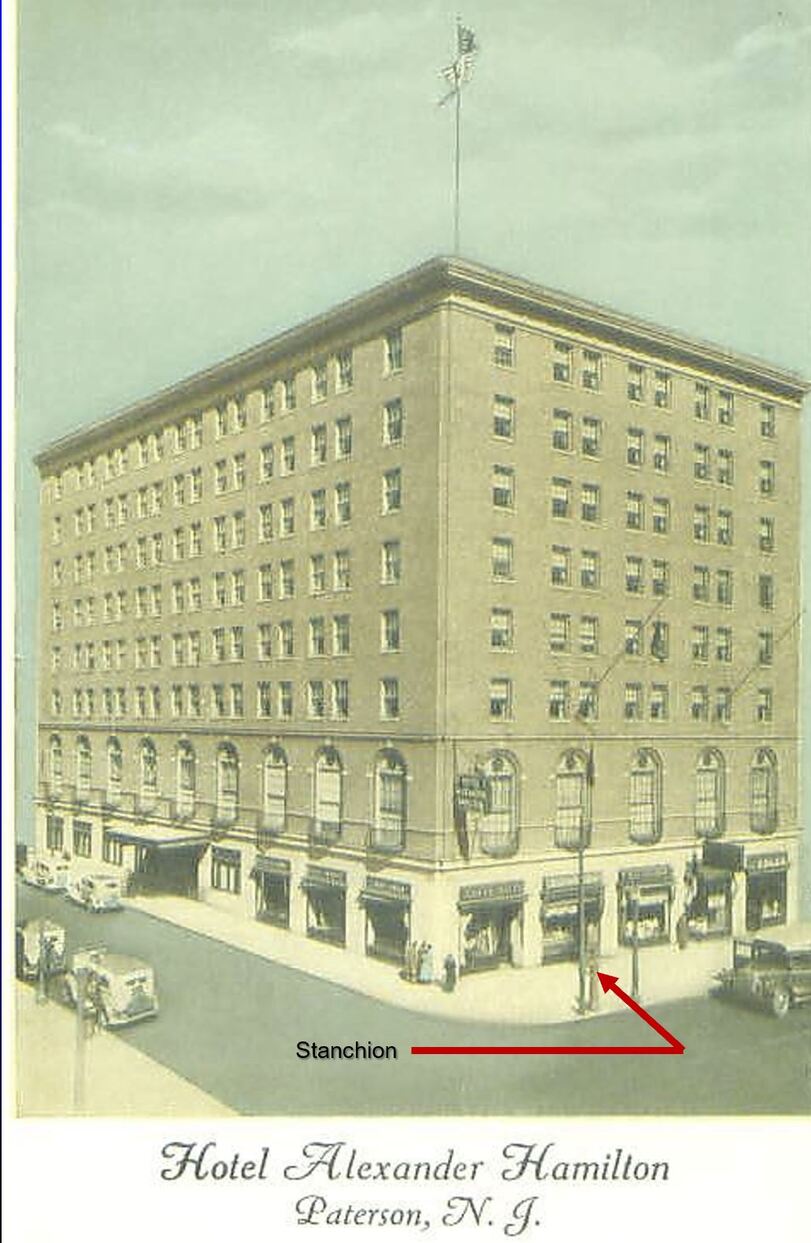 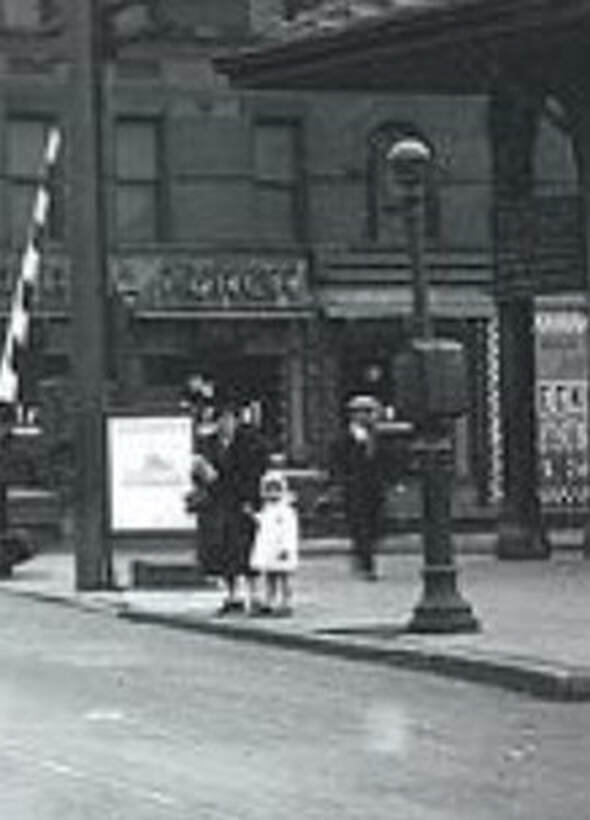 Police Box station with lamp - Market Street at Ramapo Ave Train Station
Three views of another Paterson Stanchion on top of which was a street lamp.
​This also now is located at the Boonton NJ Firemen's Museum 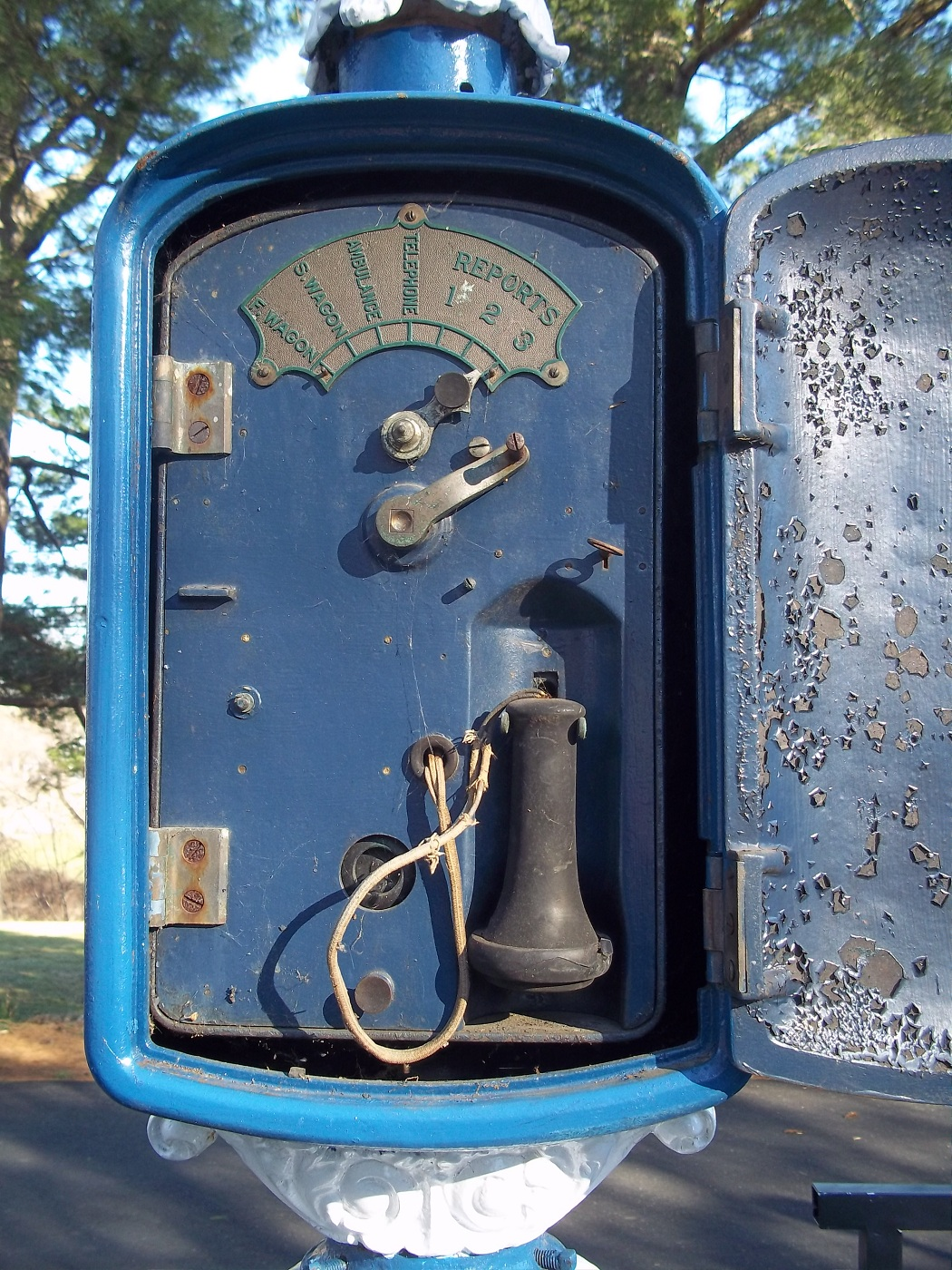 Front Door open - Box Insides: Stanchion with box at NJ Firemen's Museum, Boonton, NJ
​June 30, 1977: After a few years of discussion, the old bell alarm system was replaced by the EVRS system.  The last alarm transmitted over the old system was station 623 for a car fire on 5th Avenue. All of the old fire alarm boxes were replaced with yellow boxes inside of which is a telephone. This enabled a citizen to speak directly with a fire alarm operator. The dispatcher then communicates with the different firehouses directly over a speaker system. Bells were no longer sounded. 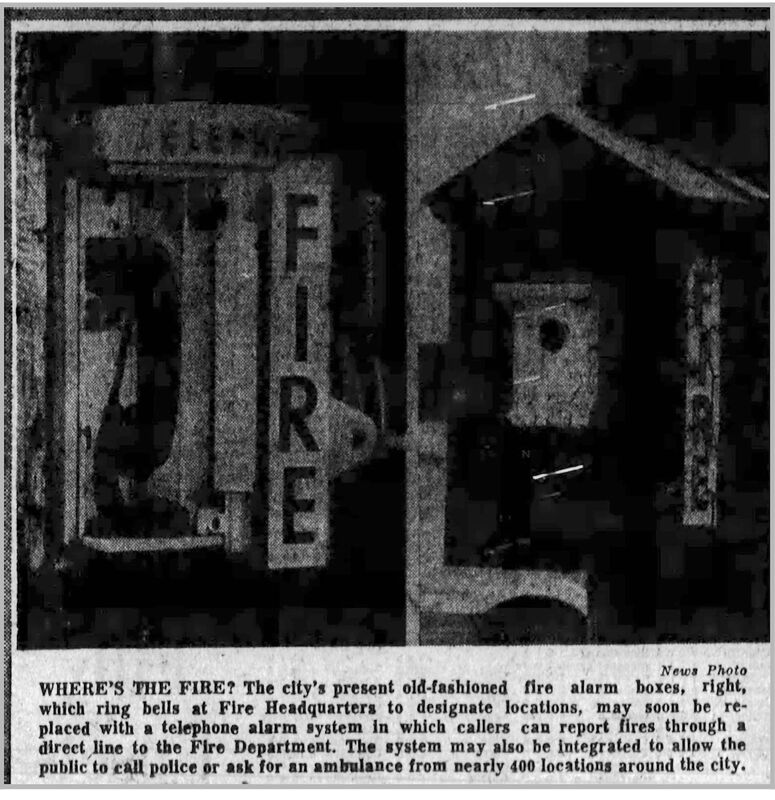 September 1974 Newspaper article on replacing pull boxes
​August 31, 1977: Paterson's fire boxes, no longer in use were presented to many of the surrounding towns by Mayor Kramer and Acting Chief Dan Carroll 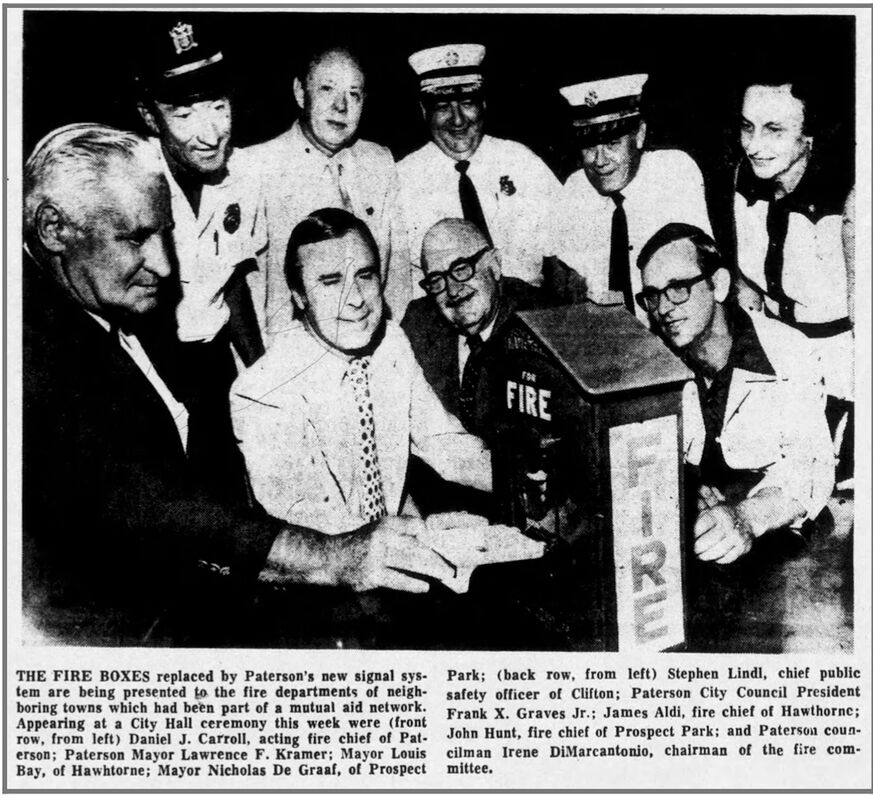