The Nott Fire Engine Company went into business in 1904. The board of alderman placed the order for two steamers with the Nott Company in July 1905: Nott steamers had spiral flange tubular boilers. The new first and second size Nott Steamers went into service December 12 1905 as Engine 4 and 8 (register #633) respectively. But within ten years both of the Nott boilers had to be replaced. In November 1915, a $1475 contract was awarded to Ahrens Fox to install a Continental Boiler and band brakes on the 1905 Nott Steamer (#633) of Engine Company 8. The steamer was sent to Ahrens Fox in Cincinnati in January of 1916. A Christie Tractor was also added and it returned to service on March 17, 1916 (see photo below) This Nott Steamer was the only motorized Paterson Steamer that never received an electric tractor. It was retired when a new Ahrens Fox pumper (#3311) replaced it at Engine 8 on December 20, 1927. The steamer was subsequently sold to a coal-mining operation somewhere in Pennsylvania: the Christie tractor was scrapped and the steamer used to pump water out off mine shafts. It was ultimately acquired and restored, converting it back to hores drawn by the Wyckoff, NJ fire department. In actuality, because of its boiler it is now an Ahrens Fox, not a Nott Steamer.
​
February 5, 1905: Chief devising specifications for two new steamers for fire and water committee 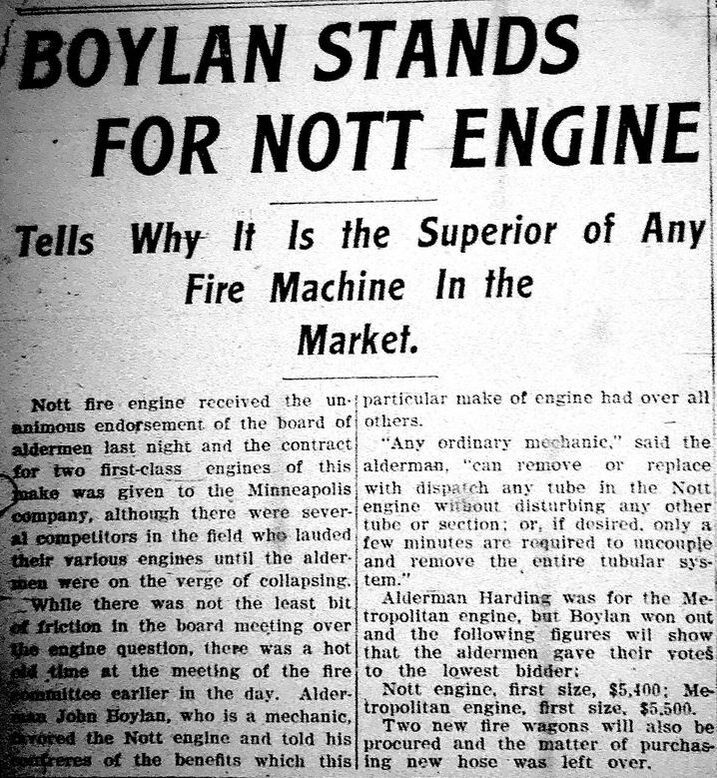 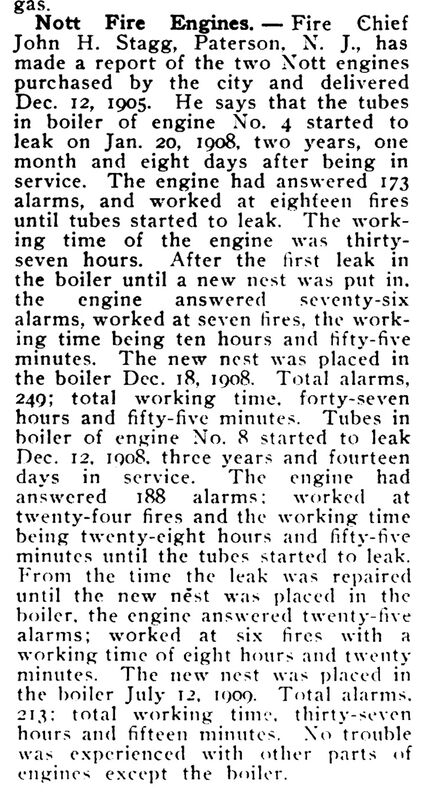 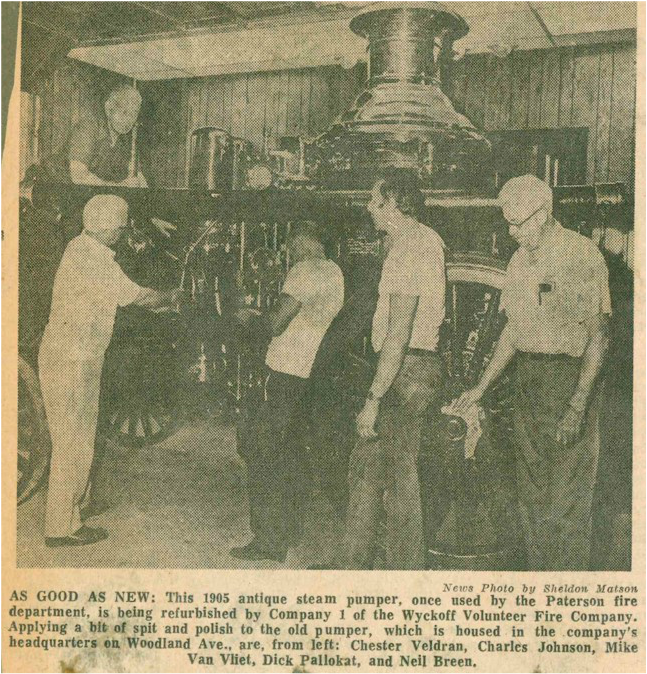 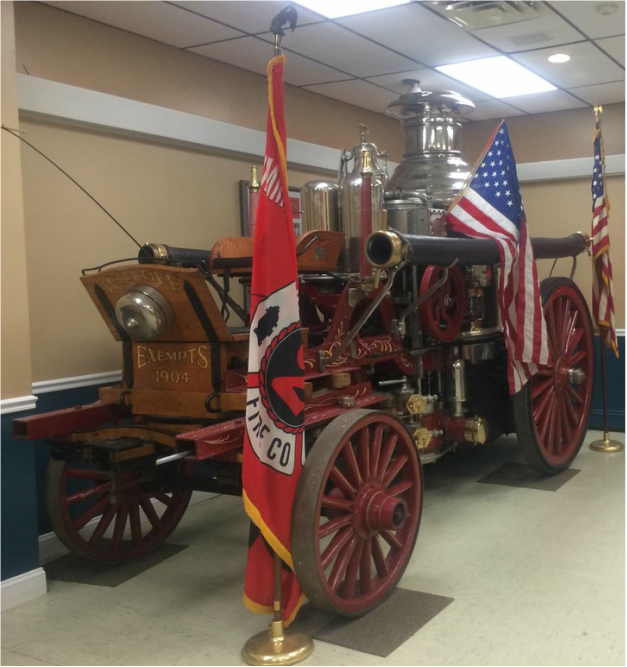 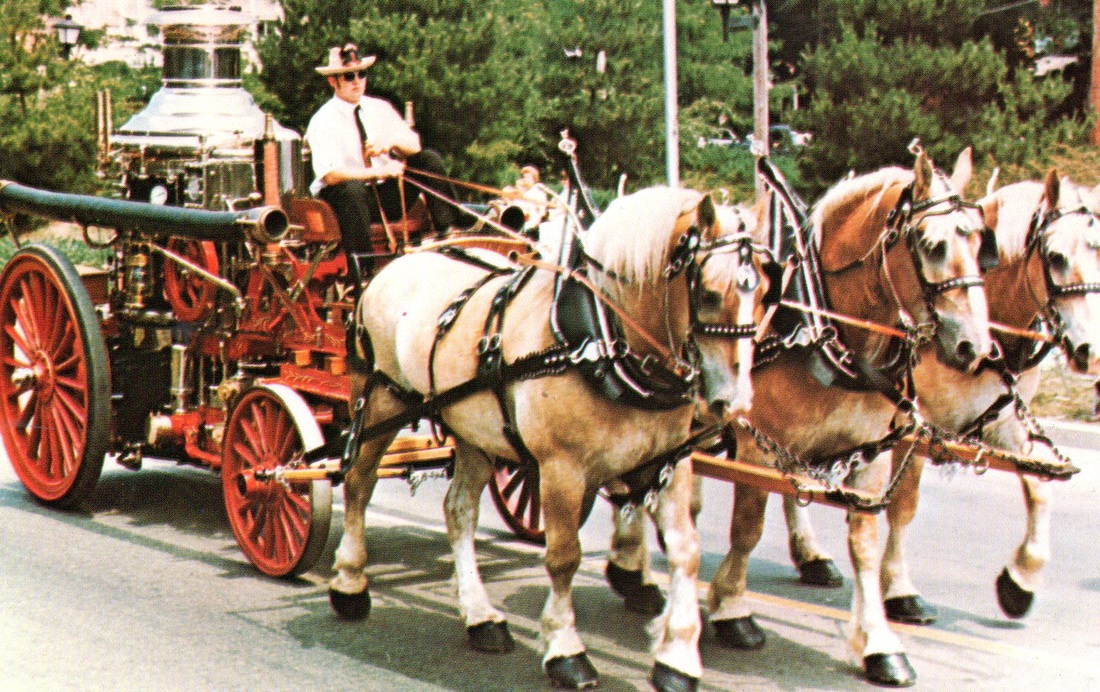 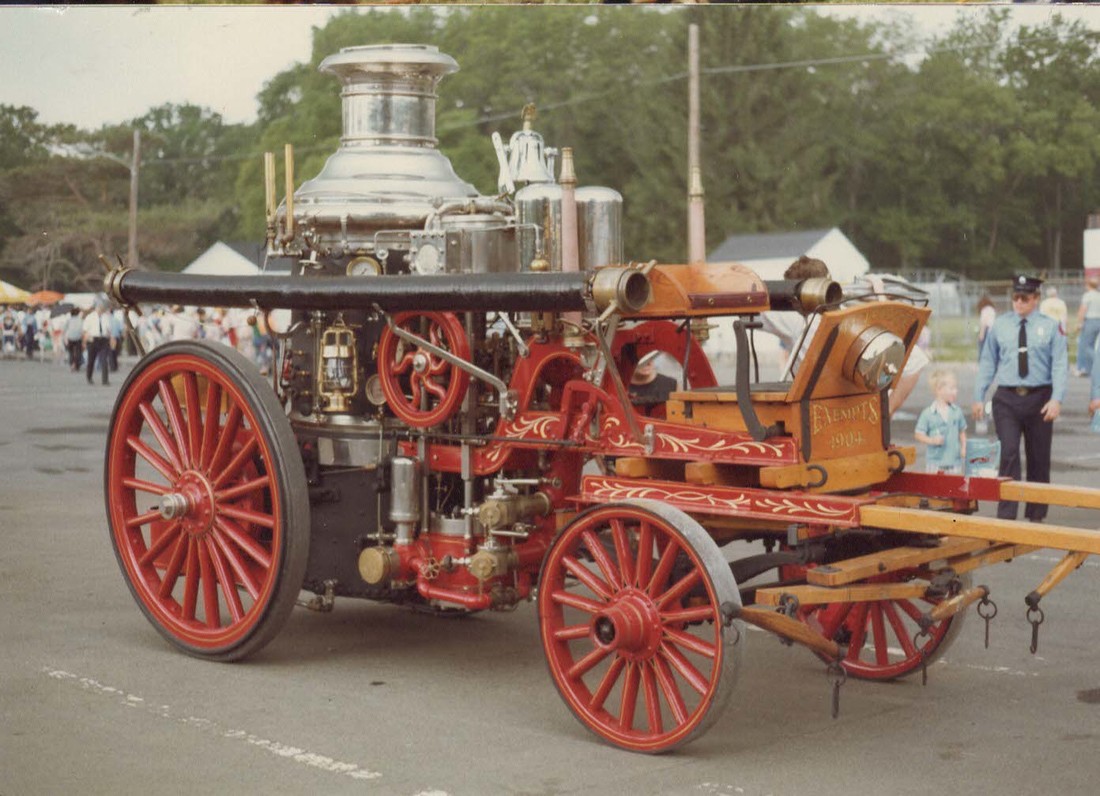 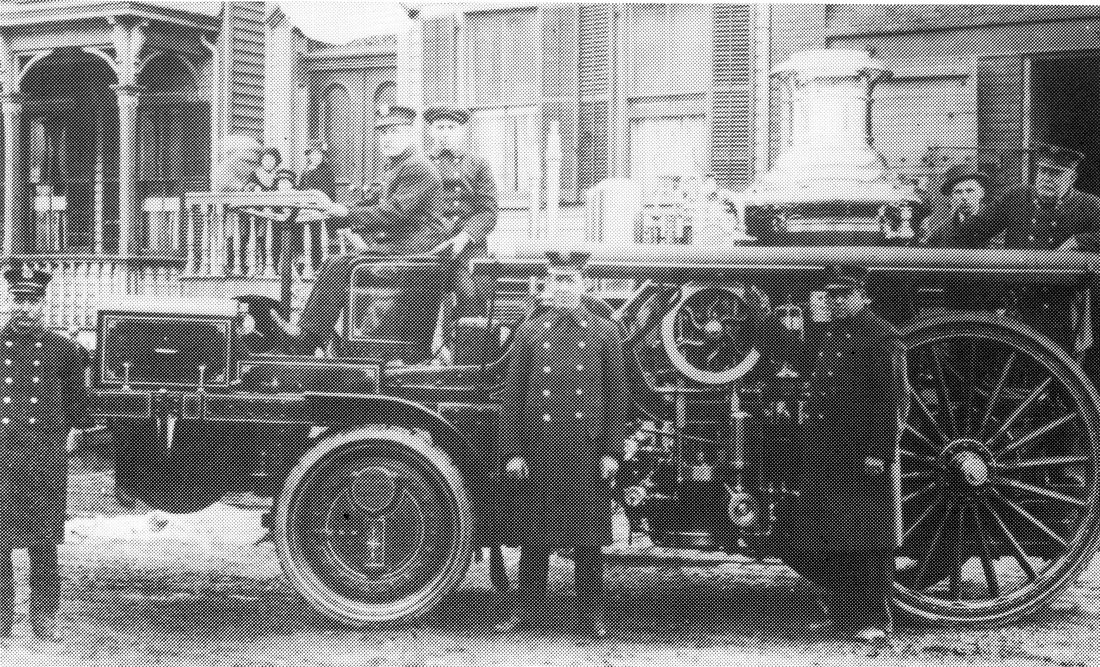 Outsuide quarters at 71 Wayne Avenue with Christie Front Drive Steamer attached
Interesting PFD apparatus relic: on August 12, 1954, a Steamer dedication plaque (were on boilers) was found buried in a dump on Redwood Avenue. Two new horse pulled steamers, manufactured by Nott, were obtained by PFD in 1905 - they went to Engine Company 4 on Slater Street and Engine Company 8 on Wayne Avenue. Note despite what is erroneously stated in article these steamers were horse drawn and not motorized (fueled by gasoline) until Christie front drive tractors were added in 1913. This dedication plaque could be from either one - of bigger interest is the Wyckoff FD obtained and refurbished to 1905 steamer used by Engine 8 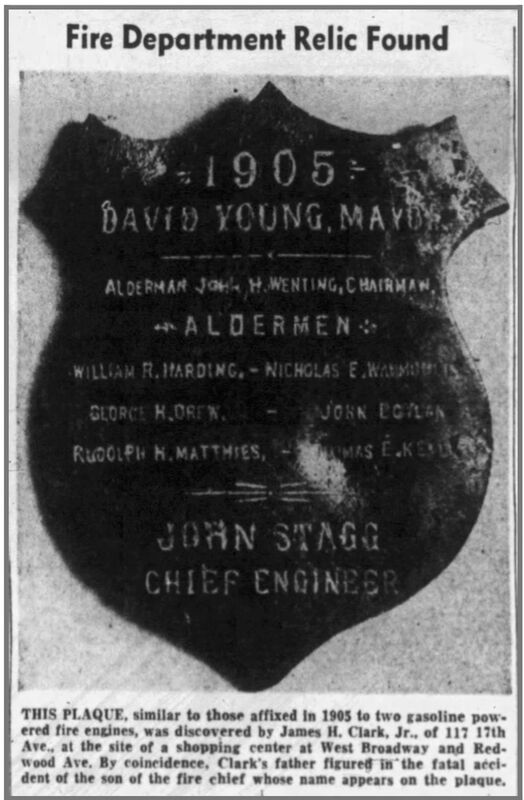 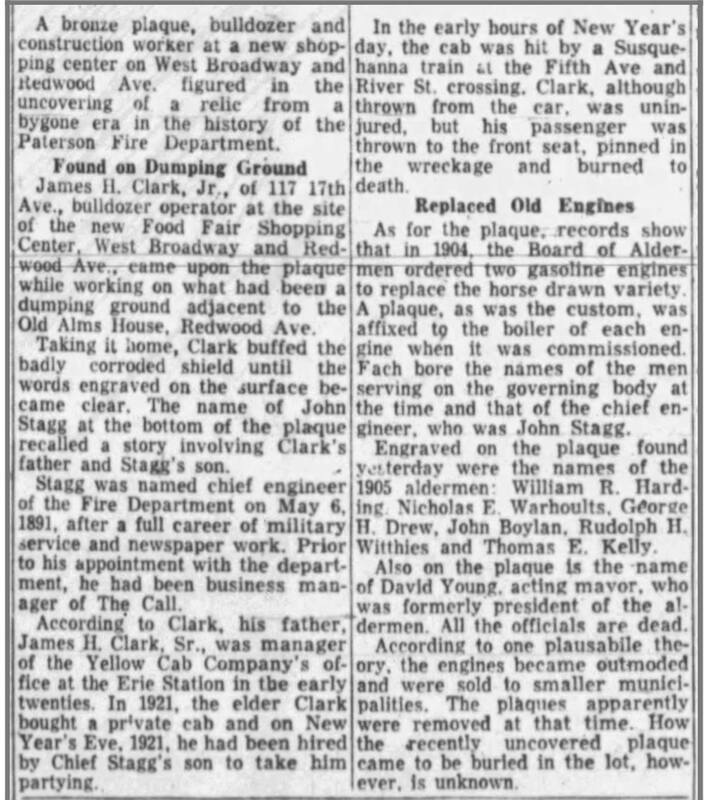 On September 9 of 1913 Engine 3 on Tyler Street (later renamed 12th Avenue) received a new First Size Ahrens Fox Continental Steam Fire Engine with Christie Front Drive Steamer (shown below - note the bell which does look exactly like the Longden bell). This motorized steamer was not horse drawn but propelled by a Christie Front Drive tractor. Amazingly, after an accident in 1915, the apparatus was converted to horse drawn. Two years later in 1917, it was re-motorized when it received a Commercial Truck Company Electric Tractor (shown below) and remained in service at E3 until it became a spare on October 28, 1930. On January 7, 1931 the steamer was transferred to Engine 10 on 17th Avenue where its use at Engine 10. Its existence there  was very short lived (1 day) due to a tractor-demolishing accident (news photo below). It was not repaired and never went back in service and was quickly replaced by the acquisition of a new motorized Ahrens Fox pumper in July 1931. This was the last steam fire engine (horse drawn or motorized) that saw service in Paterson. 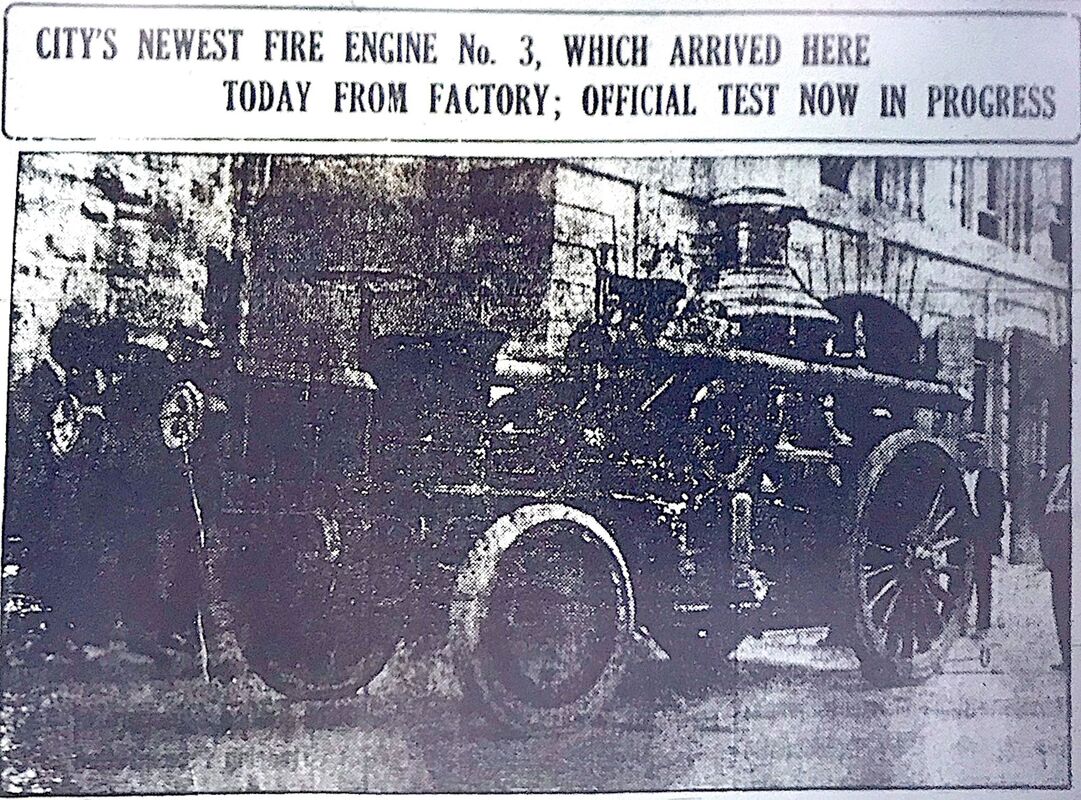 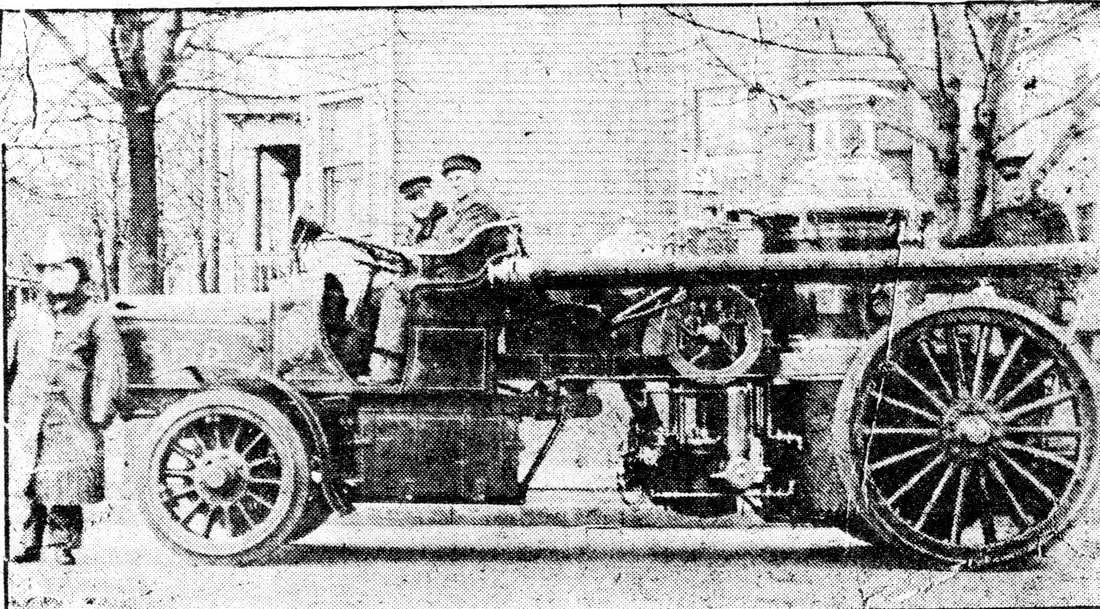 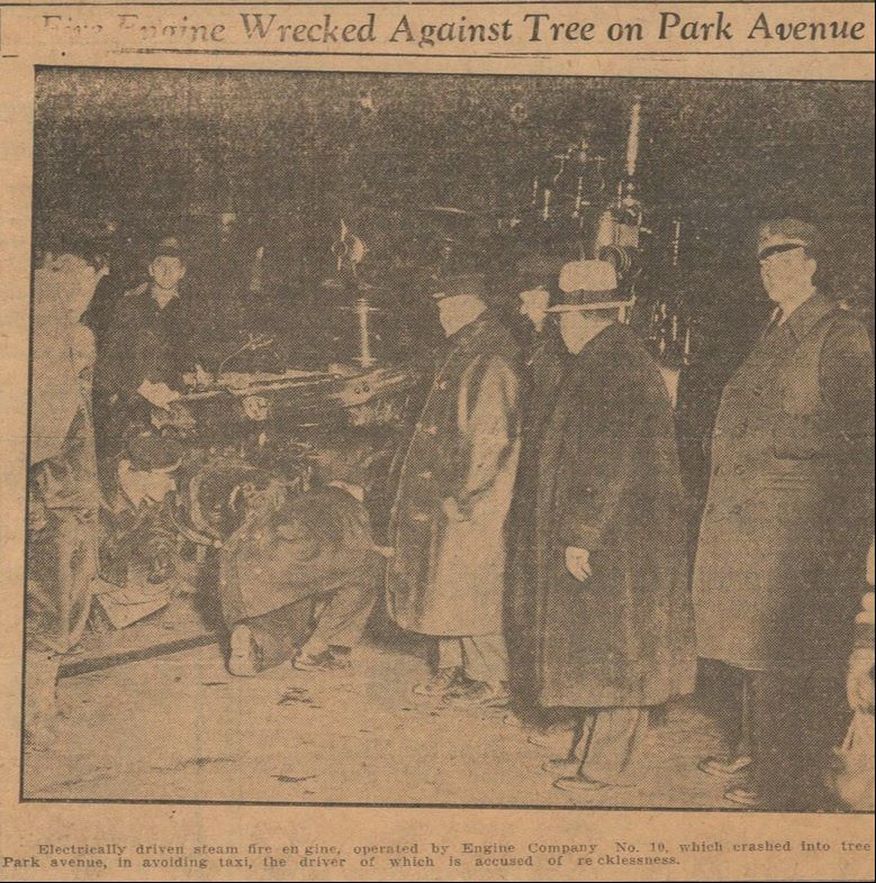 June 8, 1932:  City of Columbus Ohio inquires of PFD about windshield safety
The first apparatus that Paterson ever ordered with a windshield were the 1948 Mack Pumpers. In 1949 PFD purchased a used Ahrens Fox aerial from Hastings on Hudson that had a windshield. Ahrens Fox also gifted PFD a windshield which was installed on Ahrens fox pumper 2312 (while assigned to Engine Company 4) in 1952. 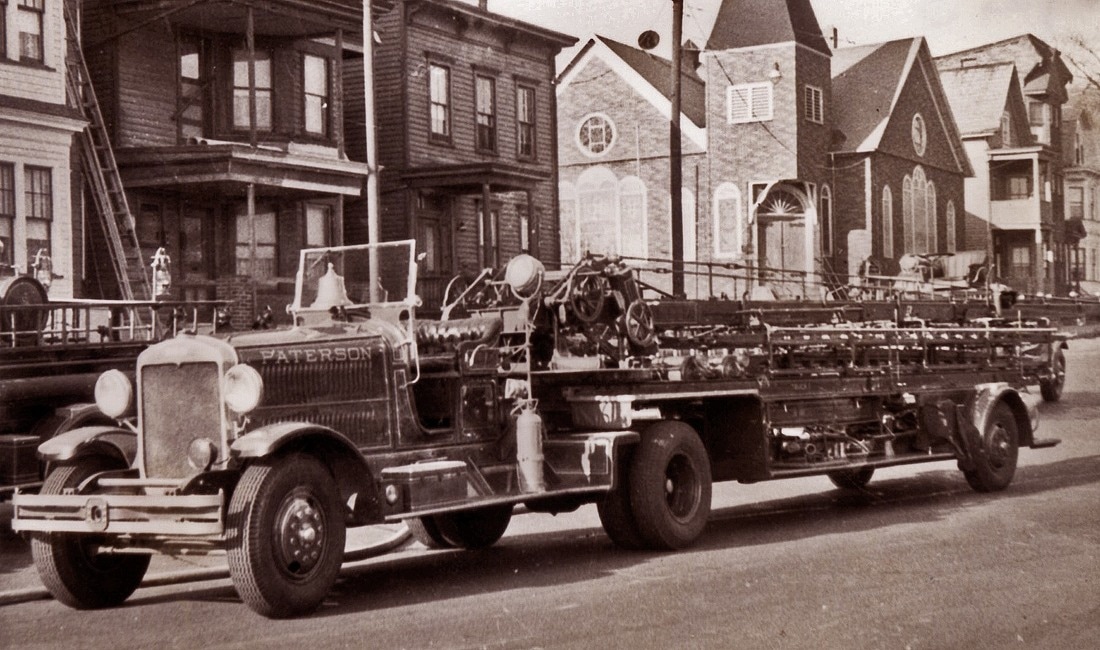 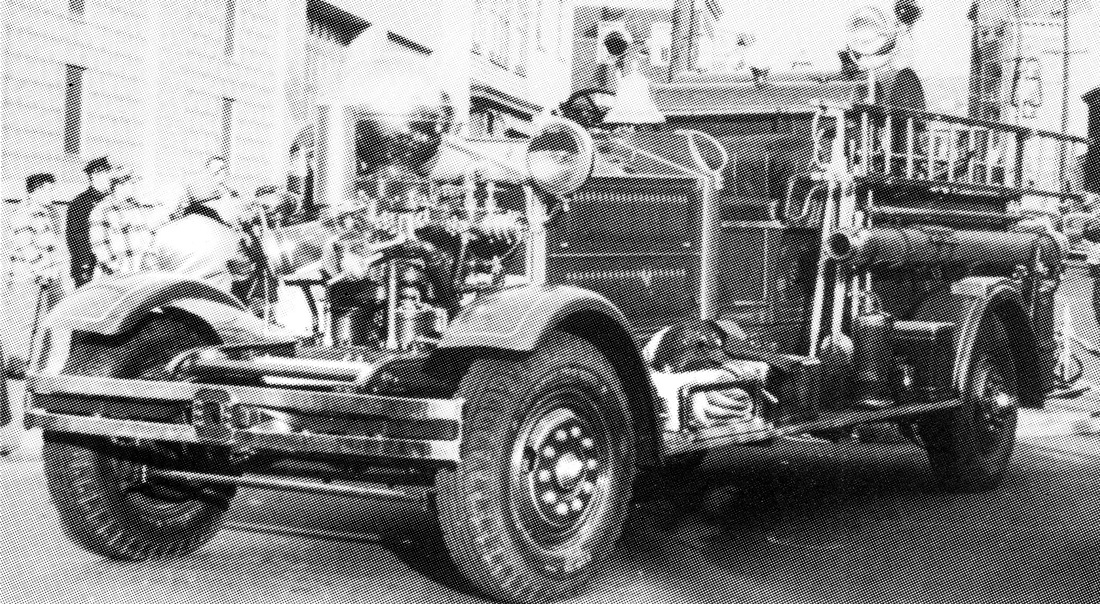 Paterson NJ Morning Call - Twenty three persons including six firemen of Engine Company 9, operating out of the 586 Main Street firehouse, were injured shortly before 11 O’clock last night when a Paterson – Passaic bus owned by the Public Service Transportation Company crashed into the side of the apparatus of Engine Co. 9 in front of the fire company’s quarters on Main Street near Van Winkle. 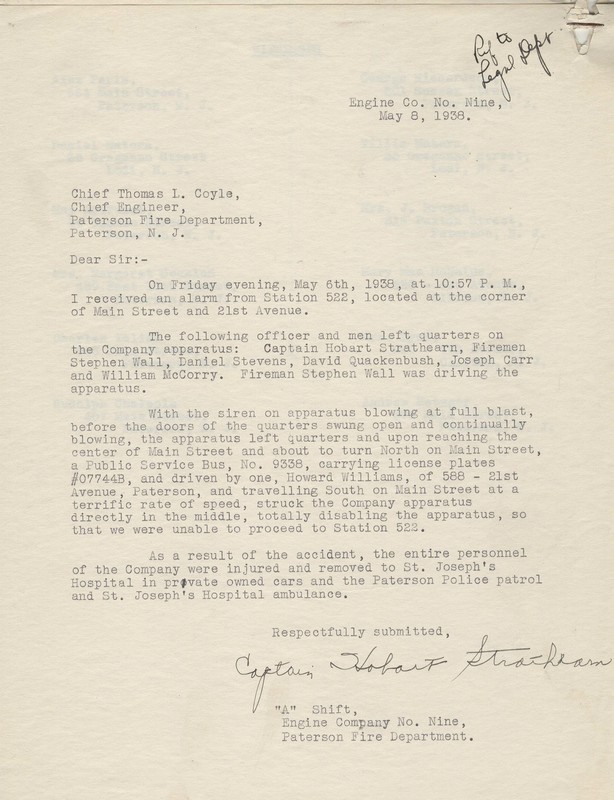 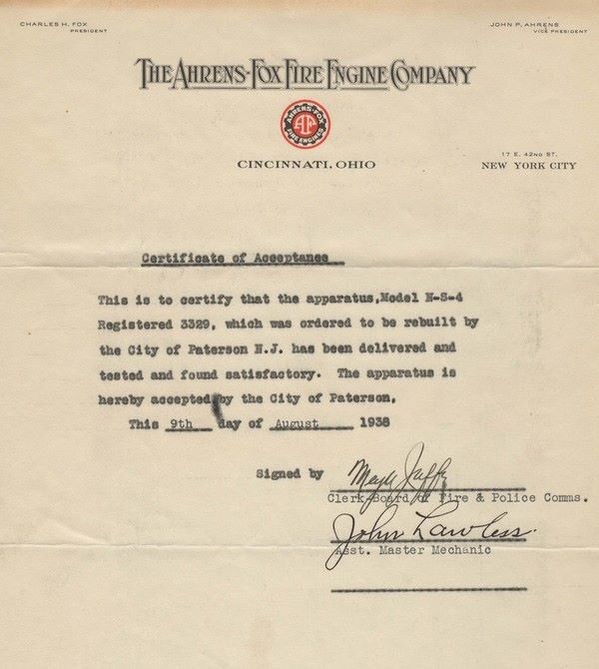 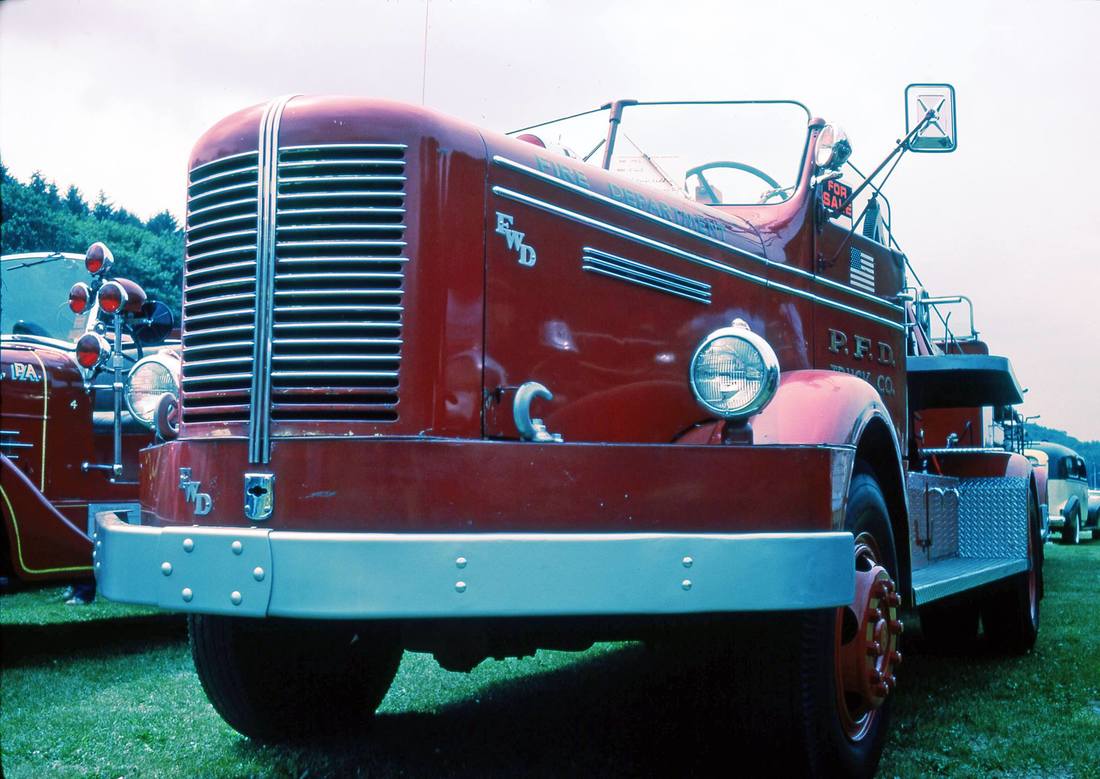 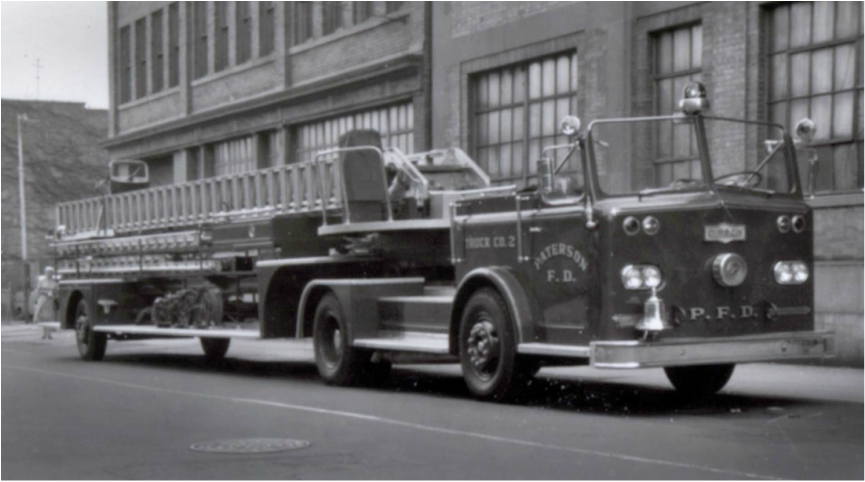 In the late 1980s, this 1961 Pirsch aerial, at Chief Comer's command, was refurbished and a roof was added creating an enclosed tractor. Joe Guerrieri, Jim Tasca & to a lesser degree Charlie Coleman worked on the conversion. Two firemen who have driven it, described it as a piece of junk and both hated it. It saw service as Truck 3 when the 1975 Pirsch fell apart (see below)

​It is shown below without markings at Northside Firehouse (serving as a spare) and then as Ladder 3.

The above restored 1961 Pirsch is often confused with the closed cab 1975 Pirsch 100' aerial (painted yellow) that went to Truck 2 at 115 Van Houten Street (seen in following photos). 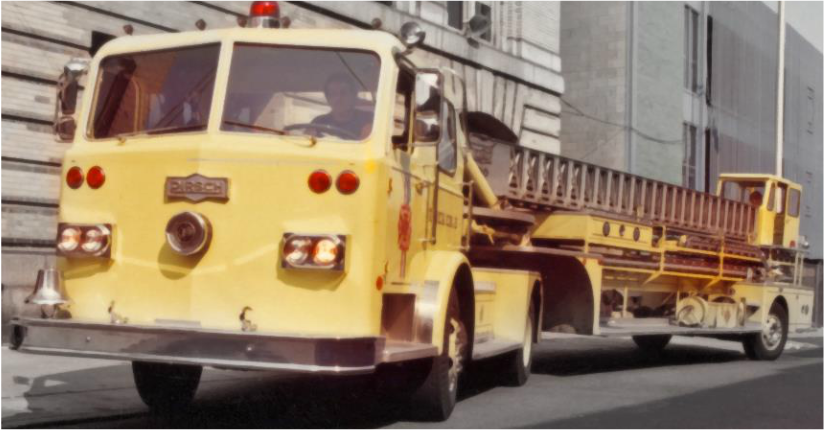 During the second Mayor Graves era all apparatus were painted white. In 1987 Truck 2 1975 Pirsch was transferred to Northside Firehouse on Temple Street 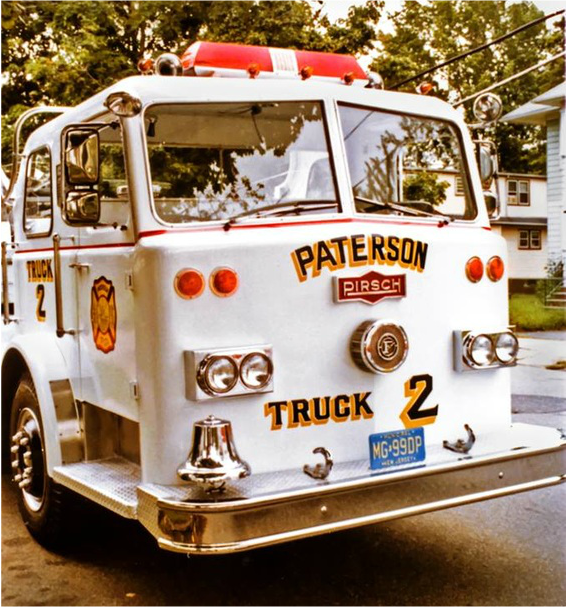 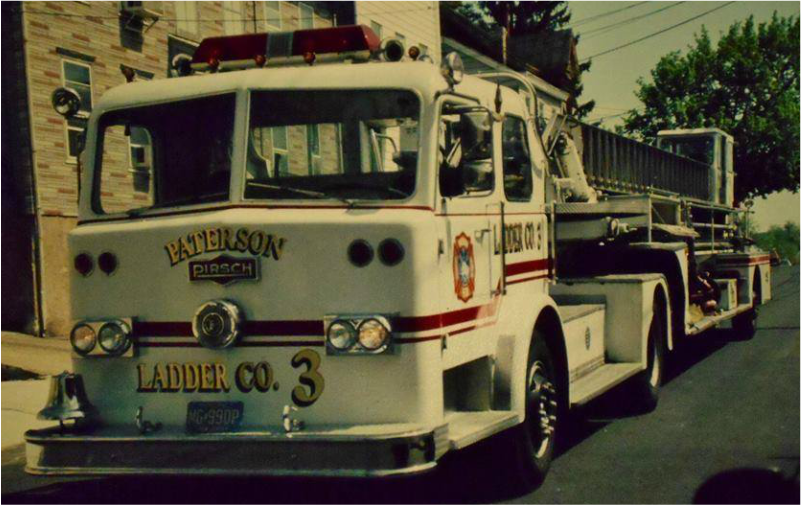 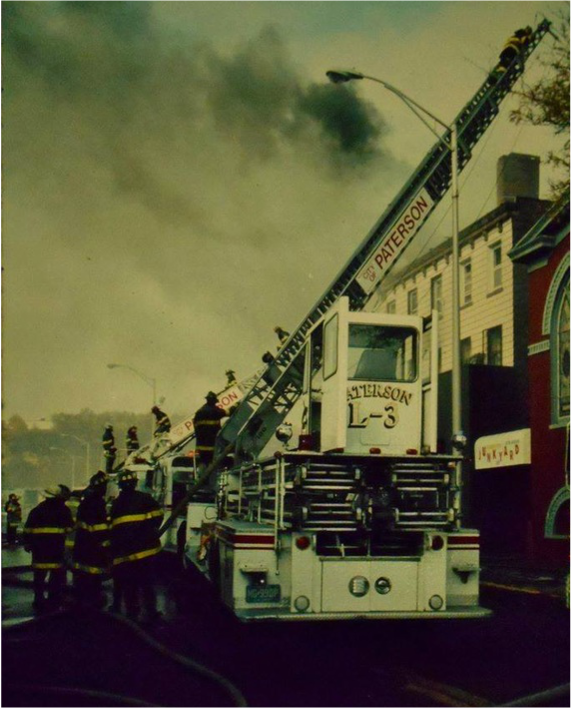 August 16, 1993, at 10:21 AM the 1975 Pirsch aerial that Ladder 3 was using ended its career when the tractor collapsed at Governor and East 16th Streets. Ladder 3 was on inspection when the box came in. EMS reported a working fire on Broadway. Steve Hatfield was the driver, Joe Murray (the elder) was the captain & Lynn Tolbert was the tiller. Ladder 1 replaced Ladder 3 at the fire. 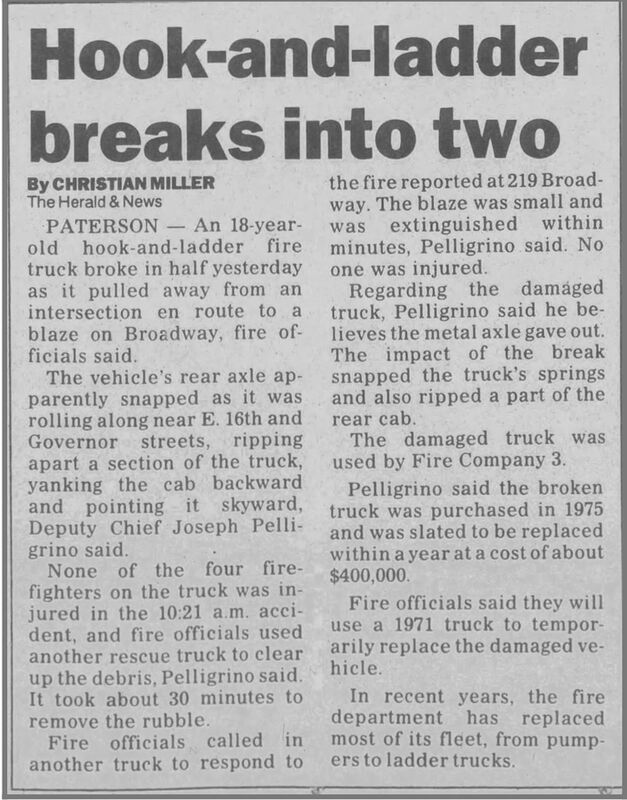 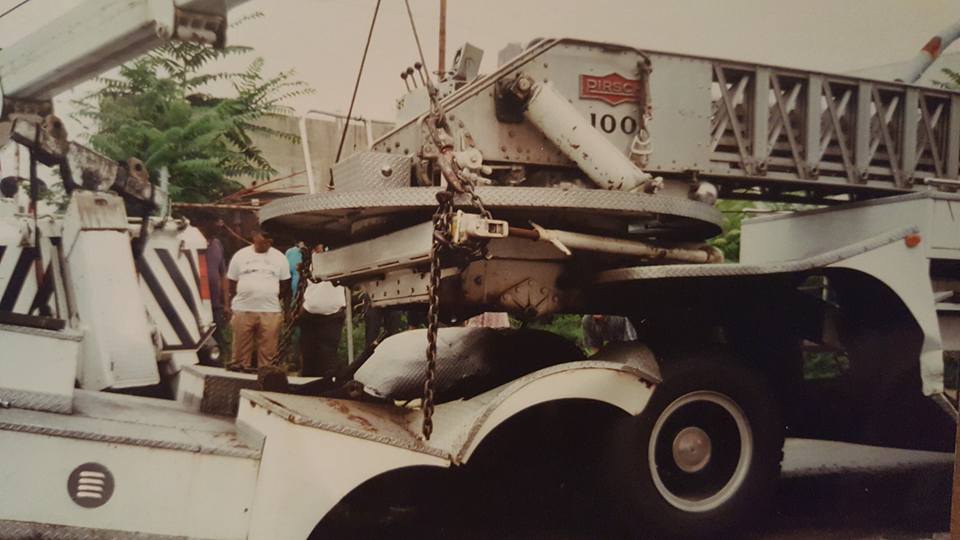 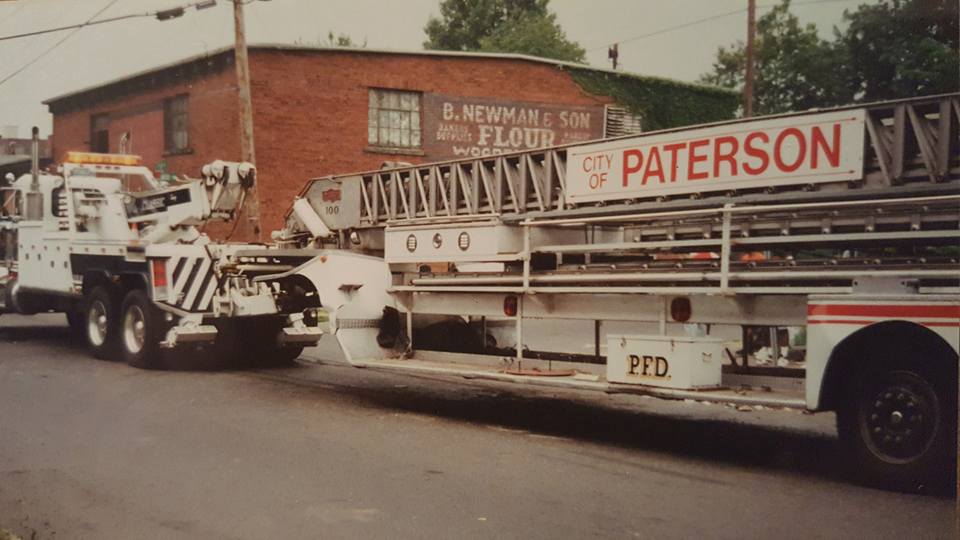 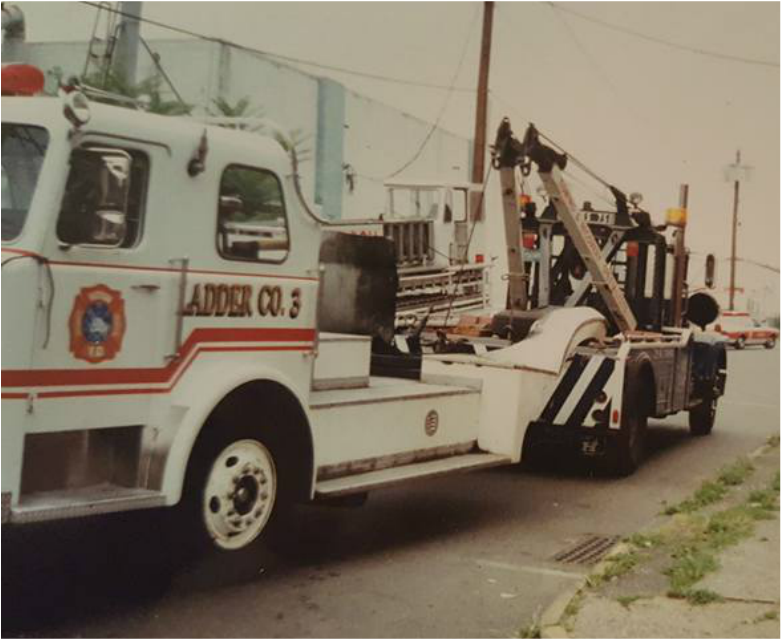 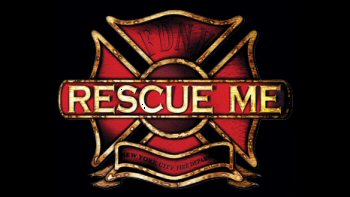 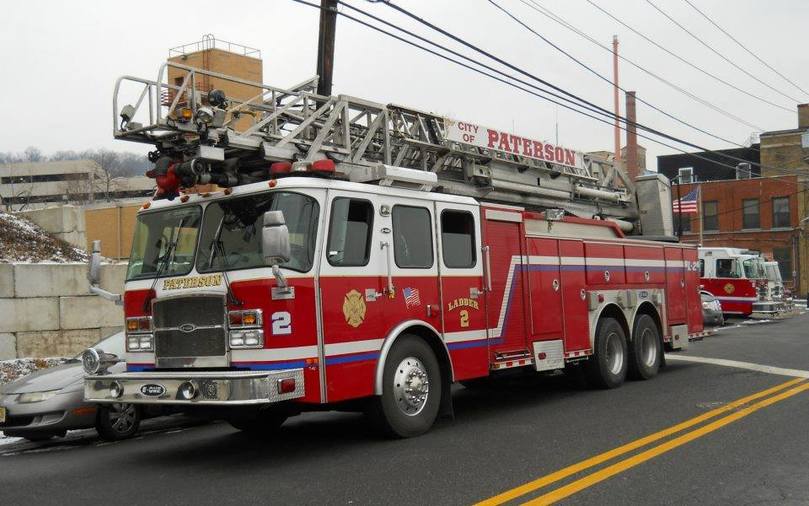 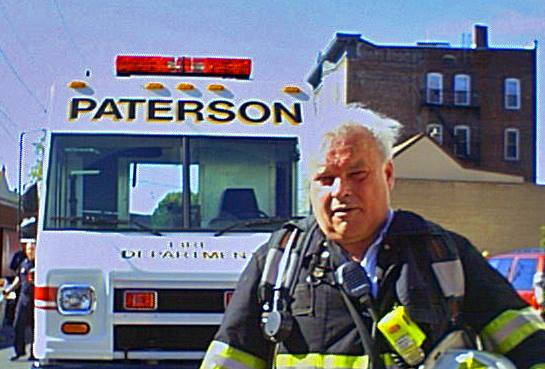 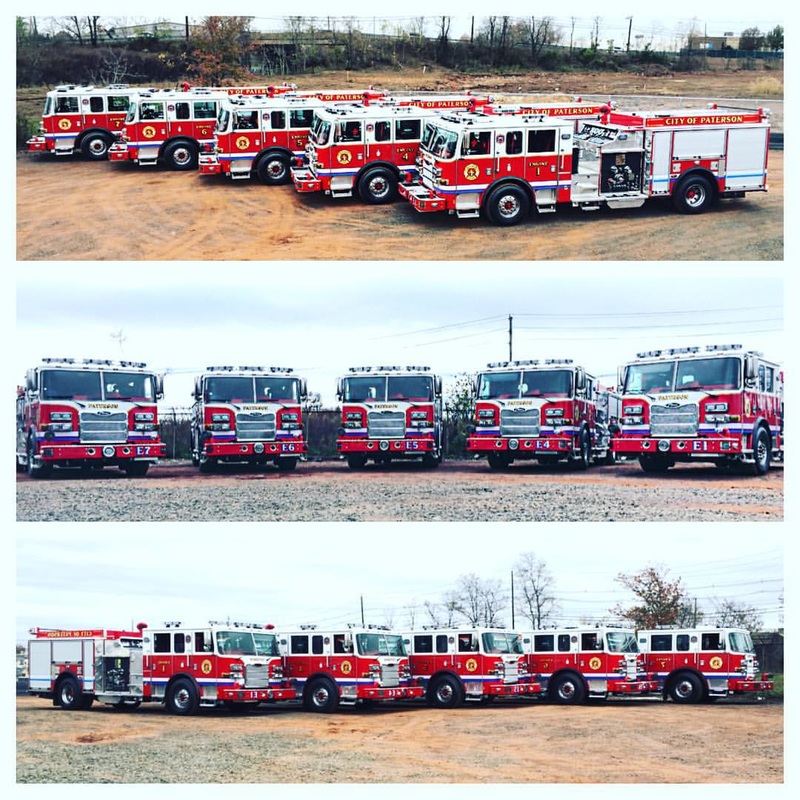