10 Hotel Street house was also the first fire headquarters used by the paid department and Chief Stagg operated out of this house. He is seen below in his gig stationed outside of the firehouse with his driver George Pfitzenmeier.​ 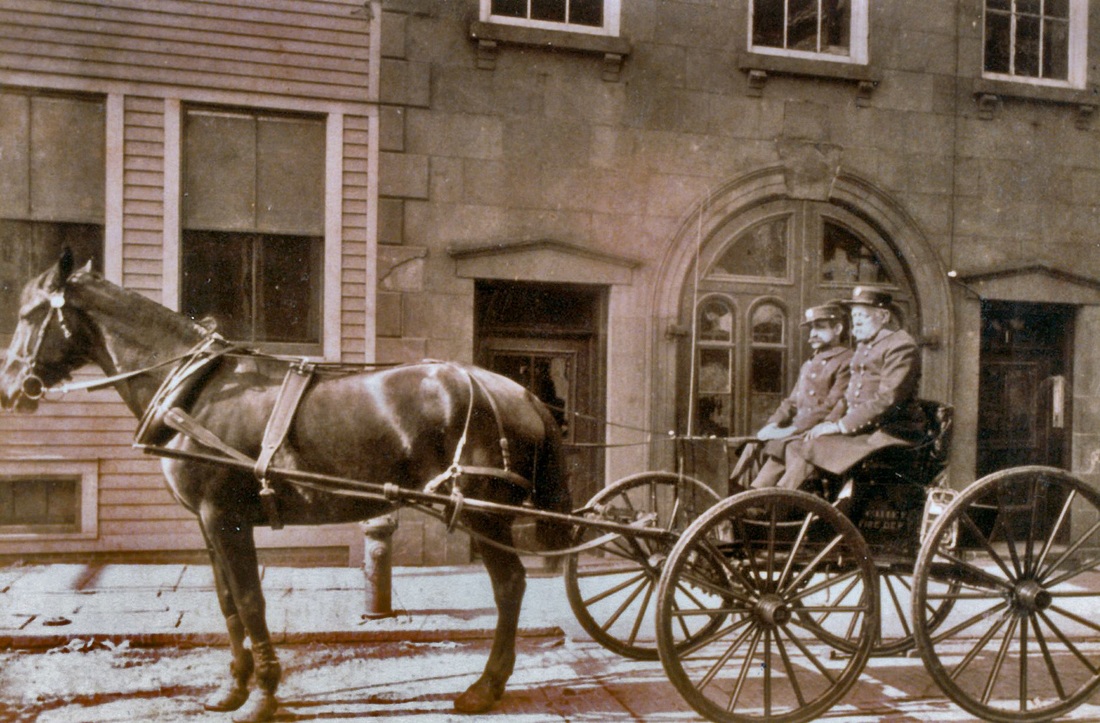 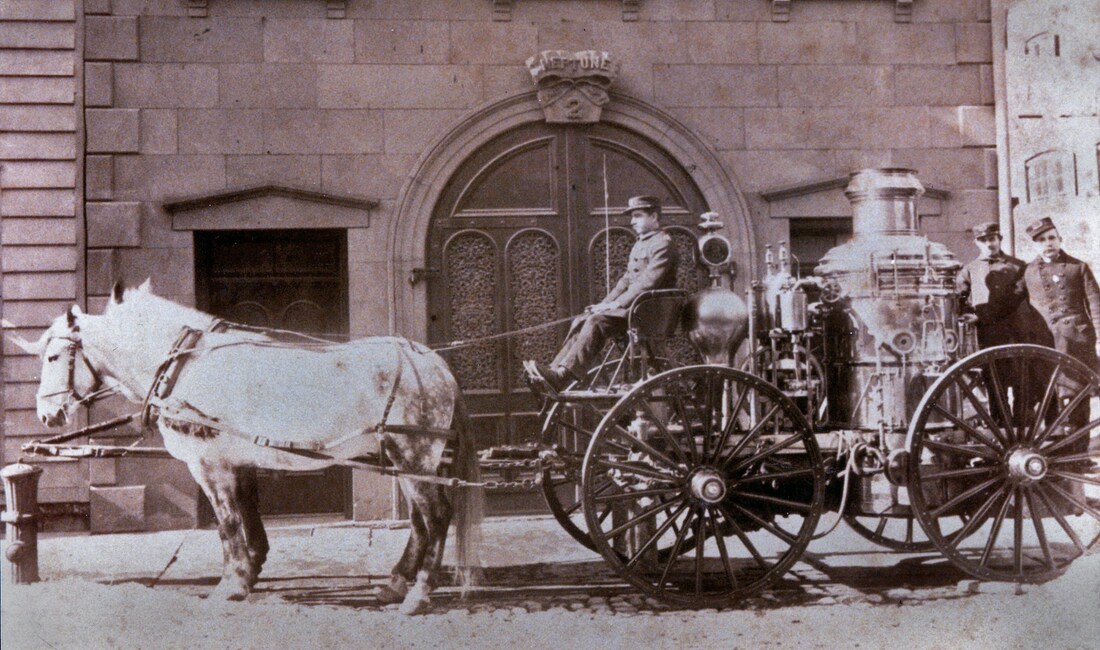 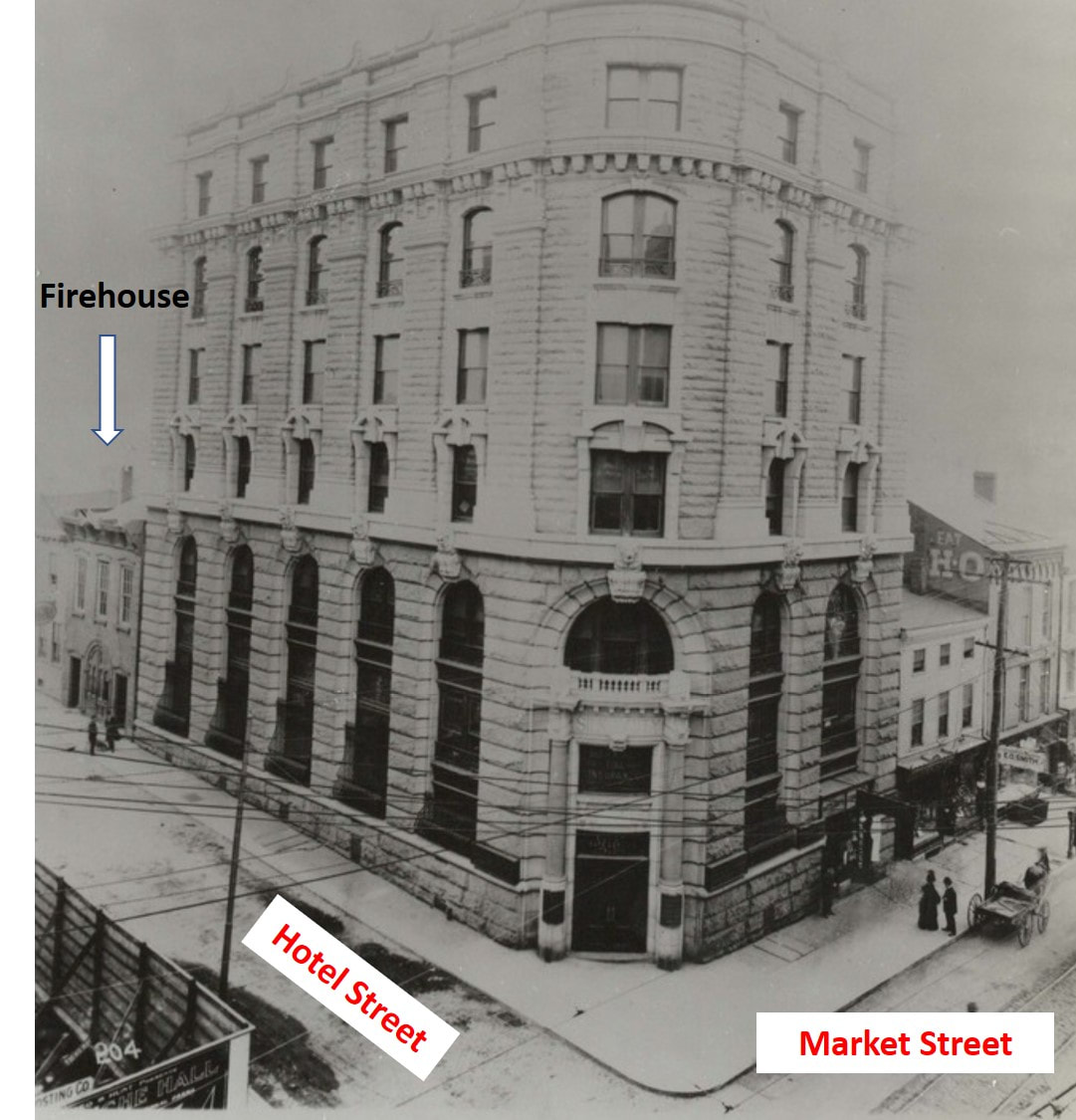 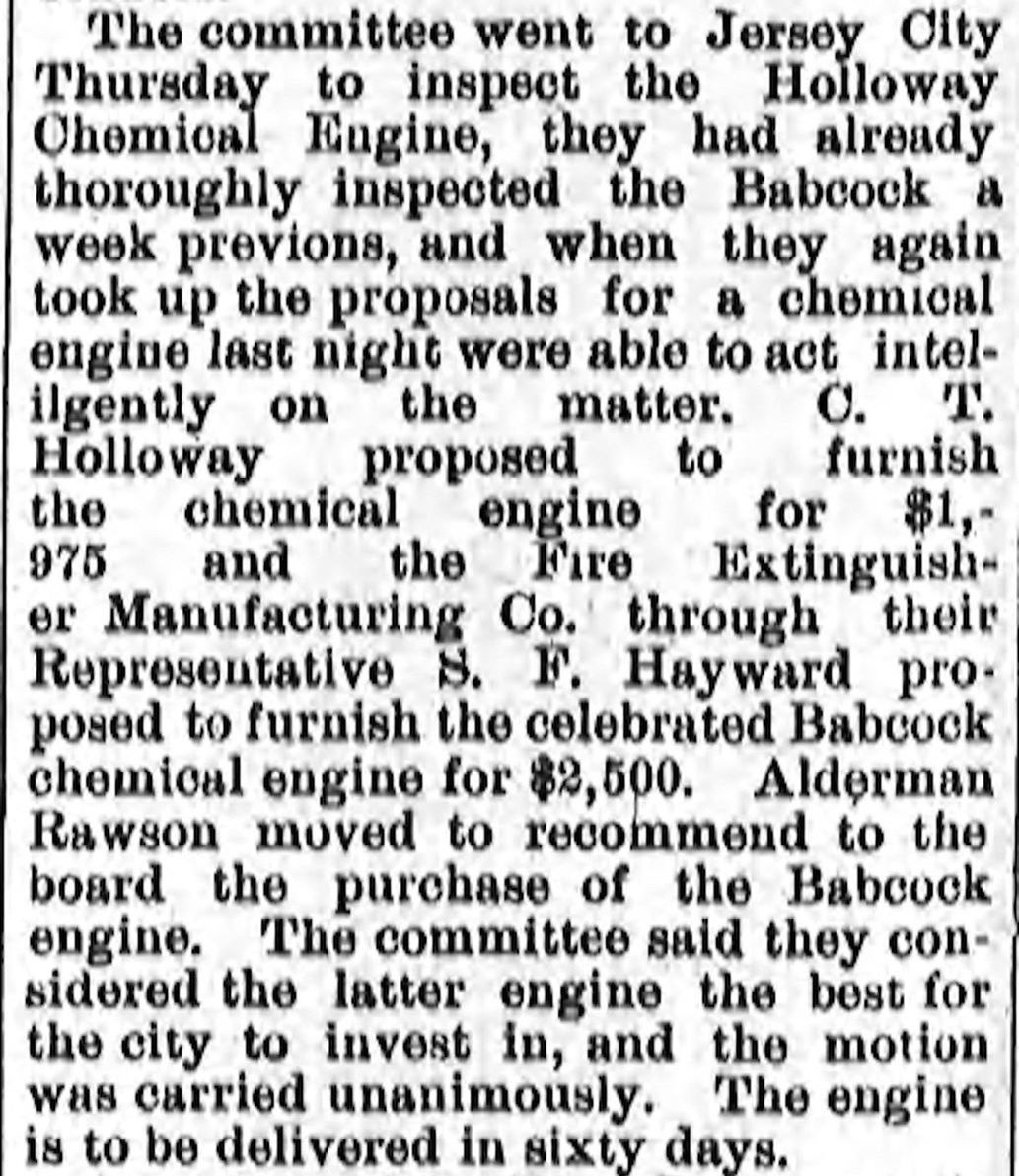 September 13, 1890:  Chemical Engine Tested and to be quartered at Engine 2 house on Hotel Street and Engine 2 Steamer being run out of Hose House until Highland Street FH is completed. Engine 2 Hose cart to relocated temporarily at Engine 9 and the Gig of Chief Murphy will be at Hotel Street with the Chemical Company and this FH will serve as Fire Headquarters. 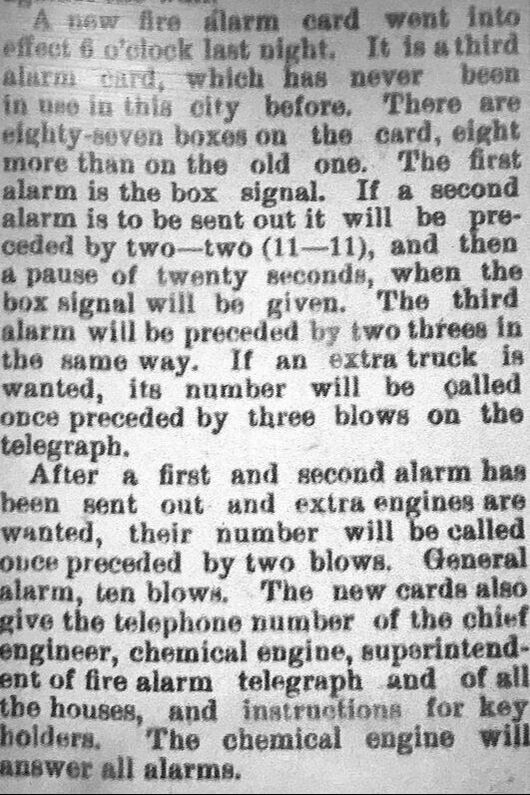 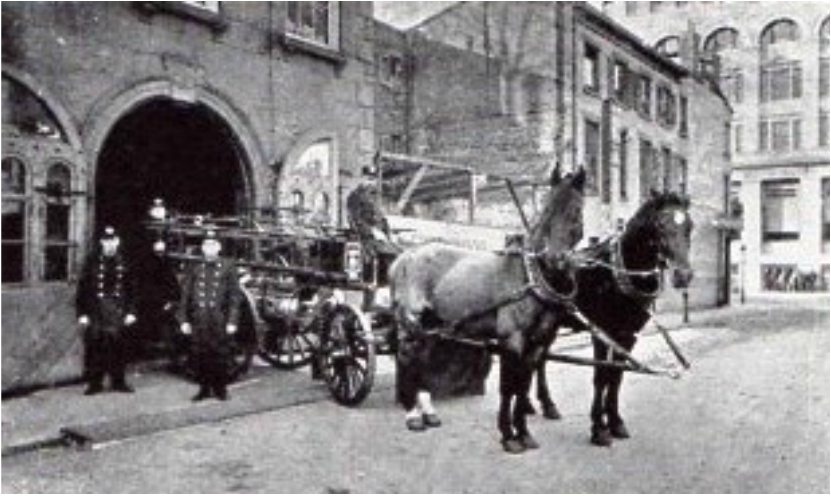 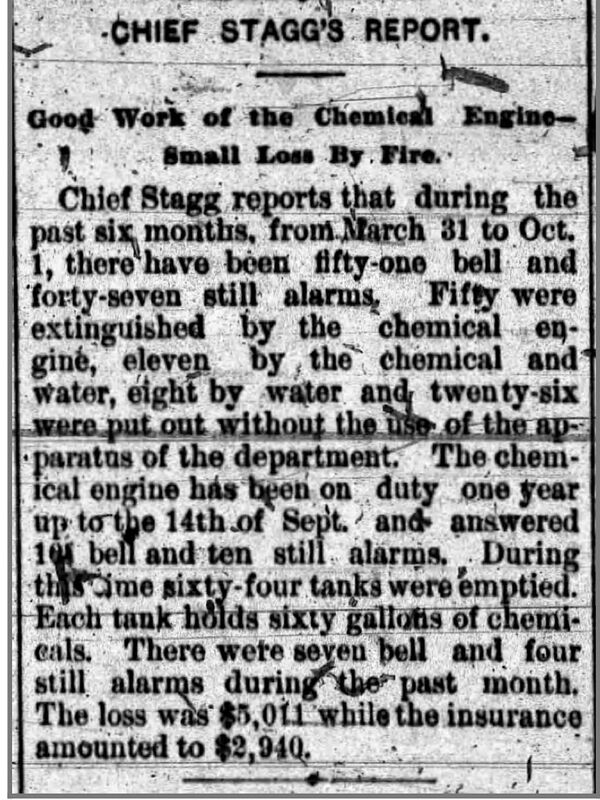 Circa 1894: Hotel Street was renamed as Hamilton Street. Firehouse remains as #10​ 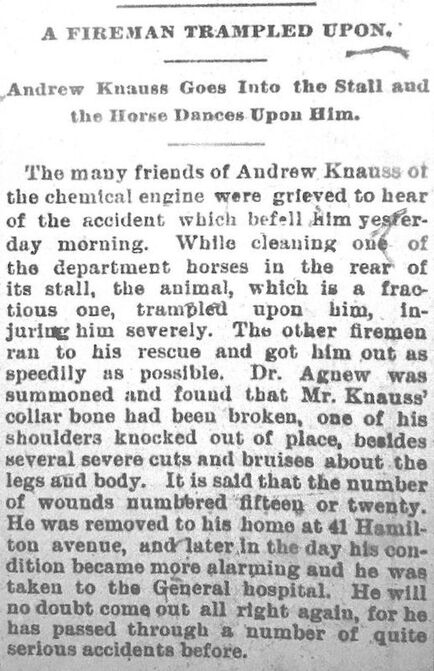 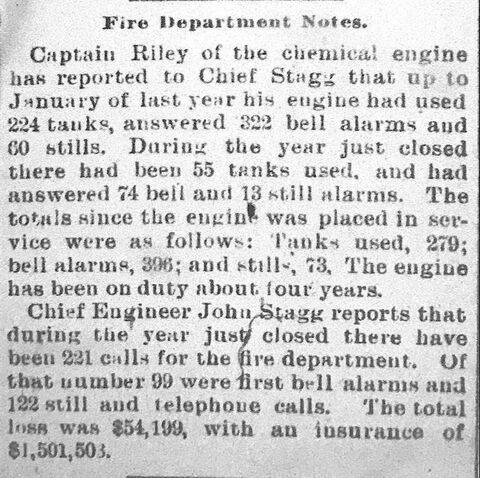 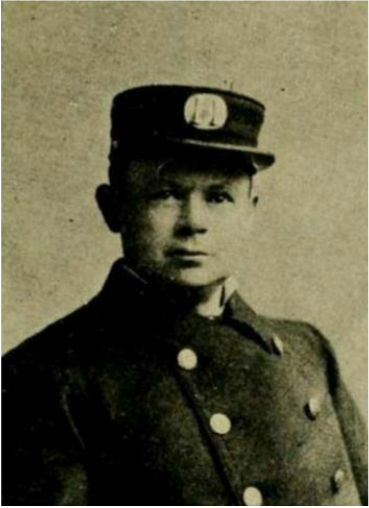 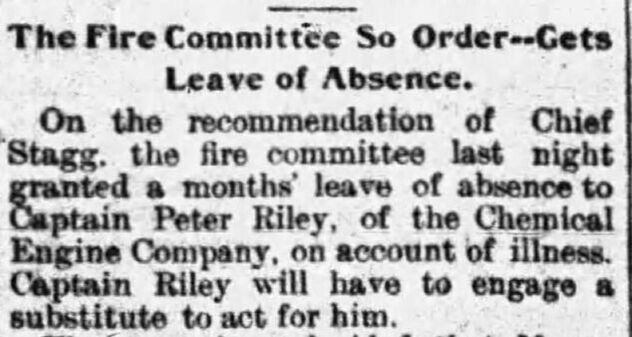 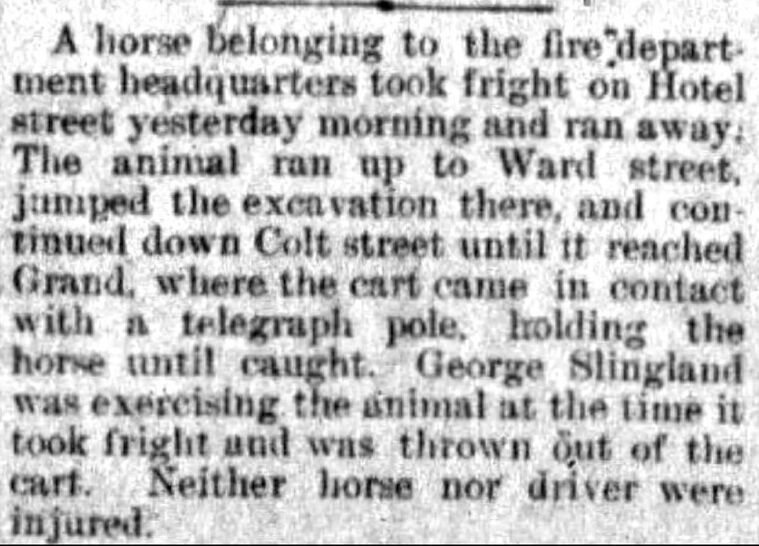 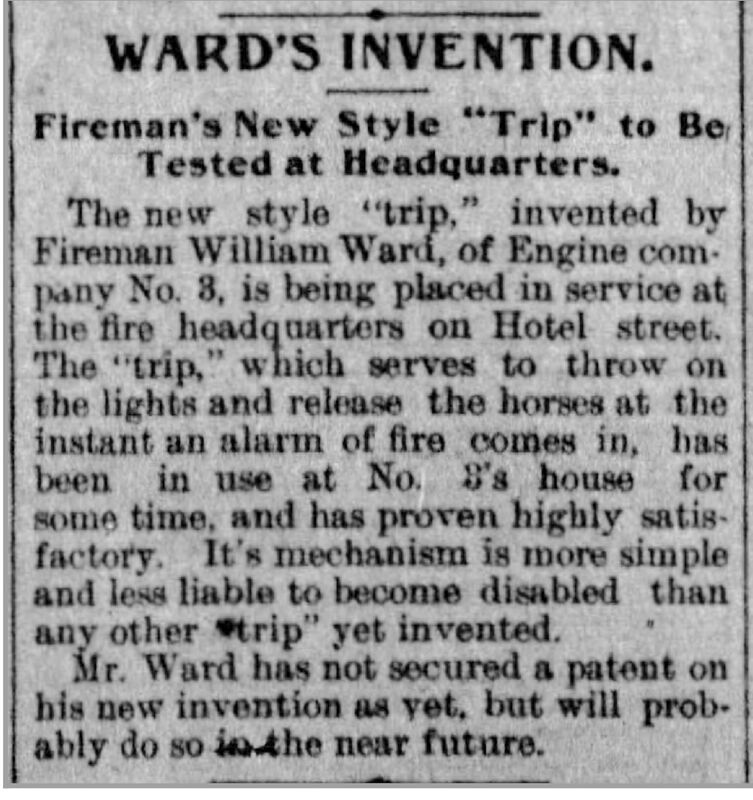 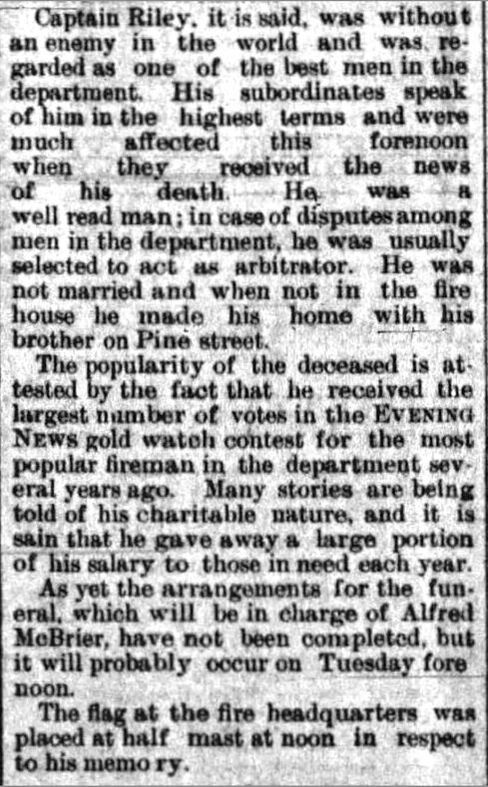 Morning Call - Courtesy Dennis Morrison
December 16, 1899:   Box 165 at 6:35 AM at Paterson Sanitary Works on Leon Street.  The chemical wagon unknowingly transports the company's pet cats (in the hose reel) to the fire 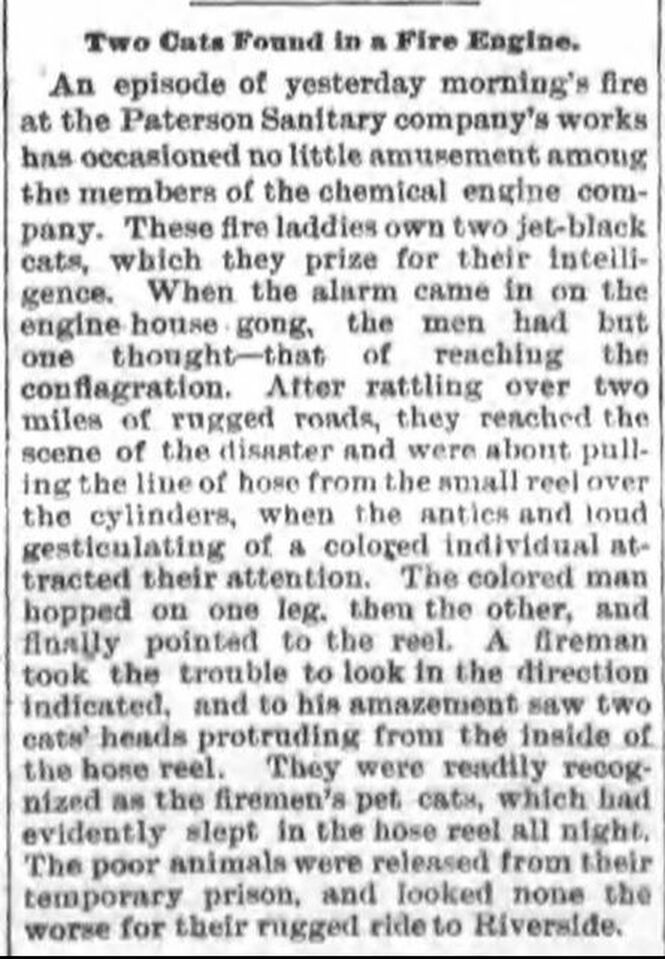 January 17 Morning Call courtesy Dennis Morrisonm
February 8, 1902: During the great conflagration when the entire downtown area was engulfed in flames, the entire eastern side of Hamilton street was lost but because of winds the firehouse was spared major damage.
July 14, 1903: ​ 24   8:20 PM Madison and Essex Streets   FF Thomas Halliwell injured again​ 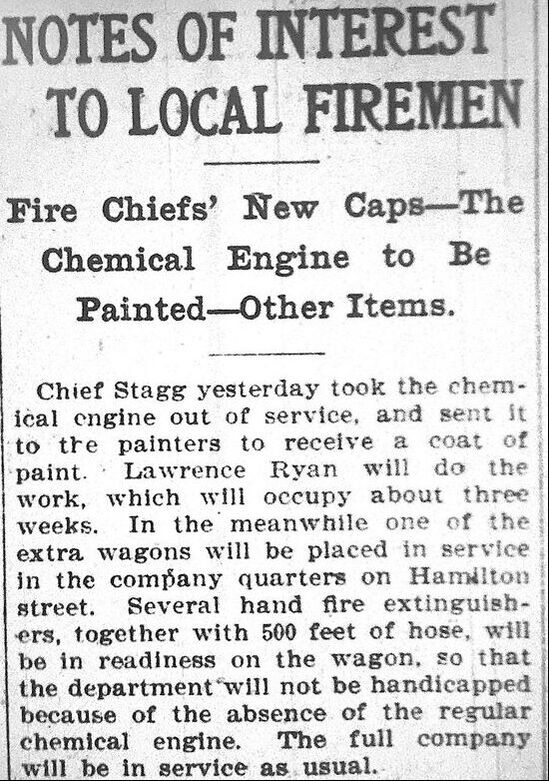 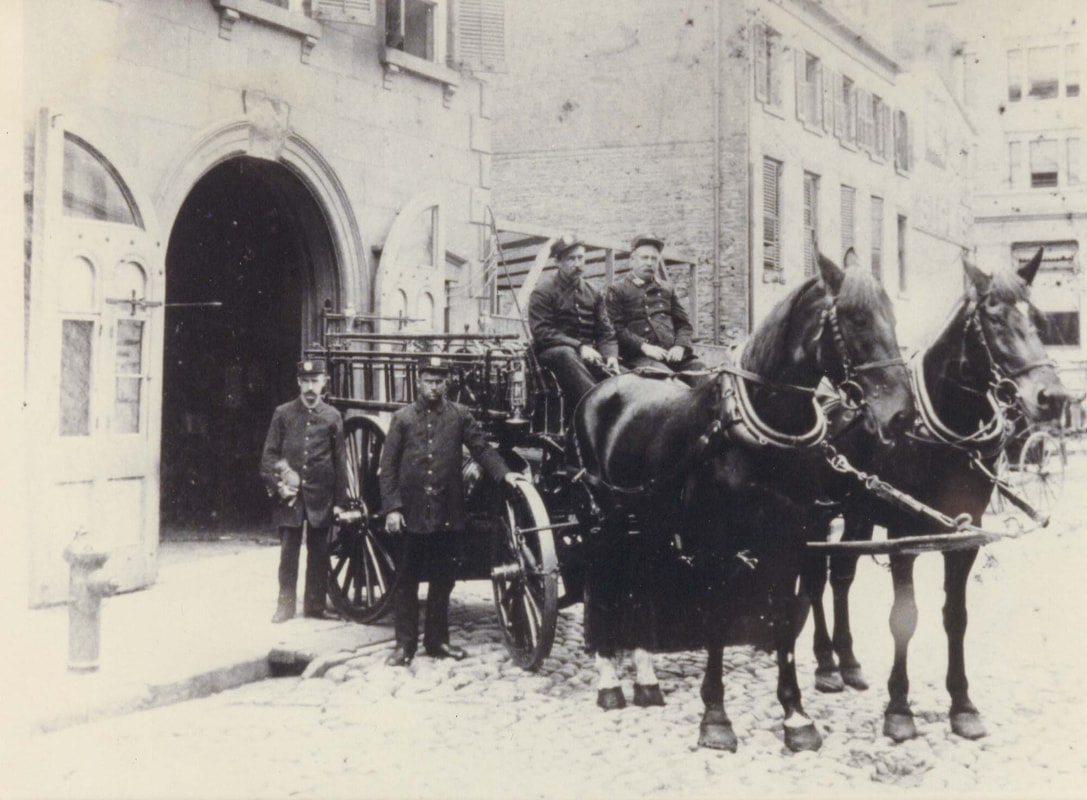 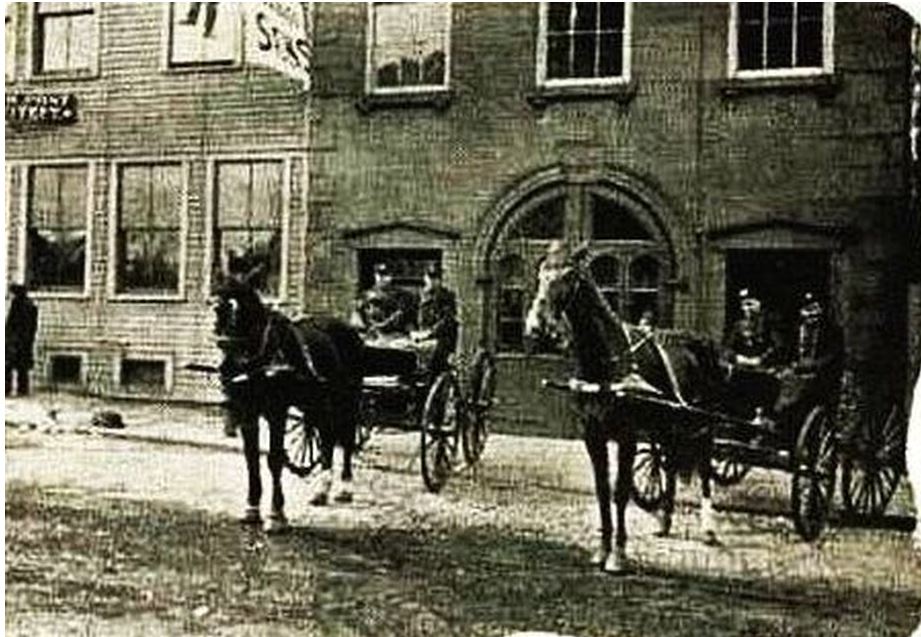 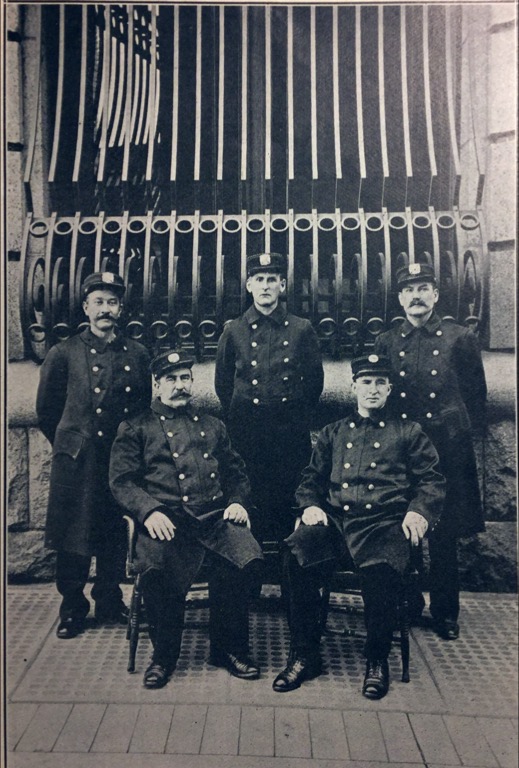 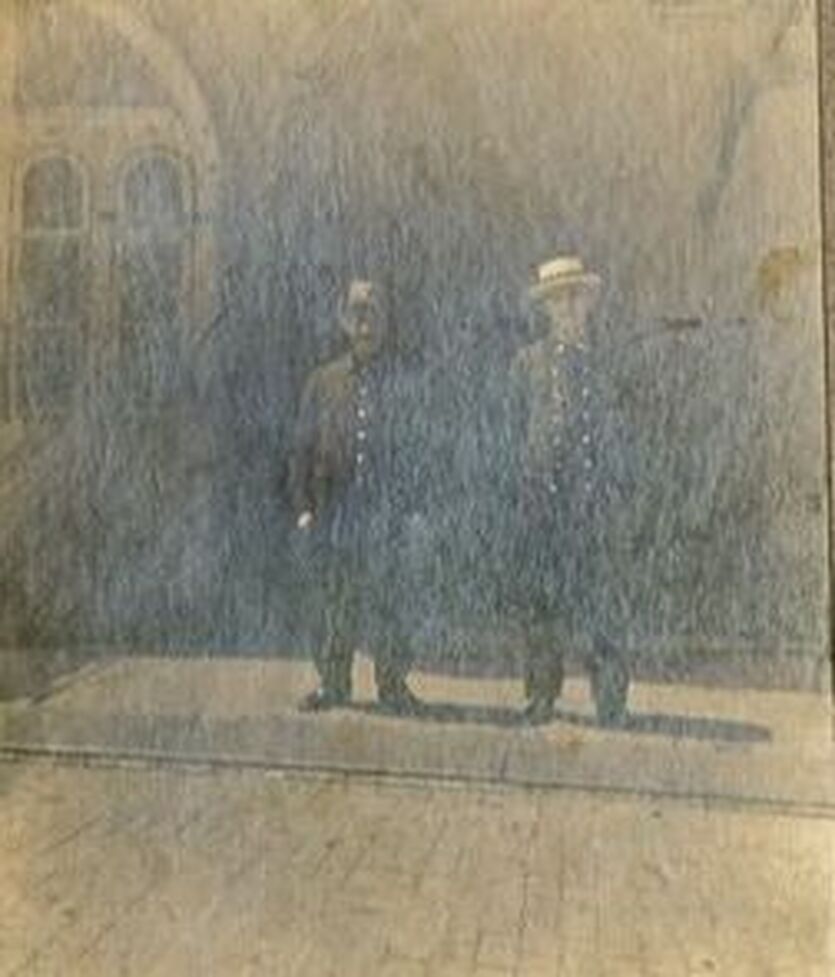 Muth family photo
1910- 1911: Below are the April 1910 to June 1911 Company Journal and its inside cover page listing the roster with badge numbers and age of firefighters. Compared to other companies Chemical 1's roster was small. Note the names of the horses "Kid and Buster" as well as their numbers!
May 6, 7, 8th and June 27, 1910 Journal entry - typical days with members taking meal leaves, chiefs visiting quarters as well as a fires where chemical extinguishers used
July 12, 1910 - Fire where company responded to Station 425 and reported Chief John Stagg and Assistant Chief Gilmore 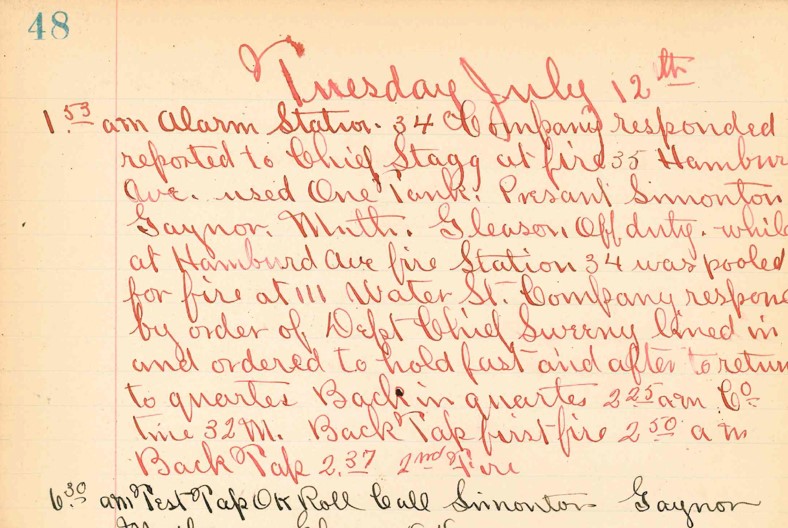 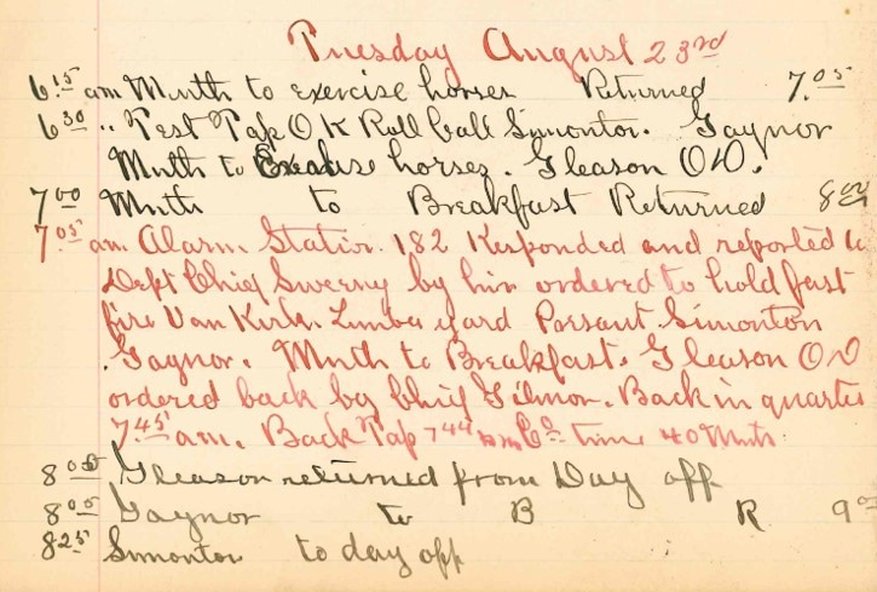 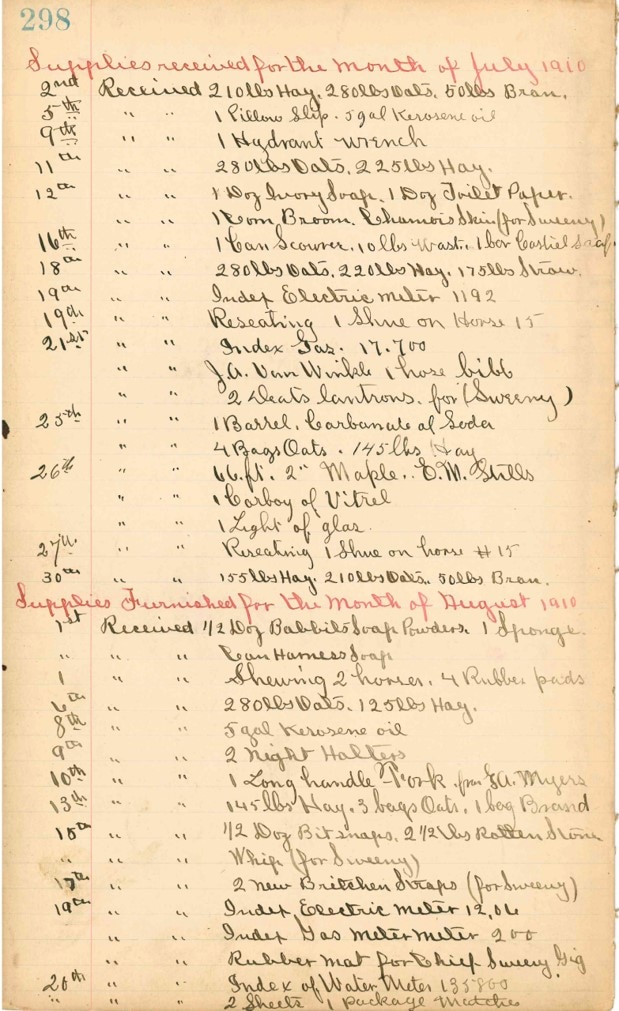 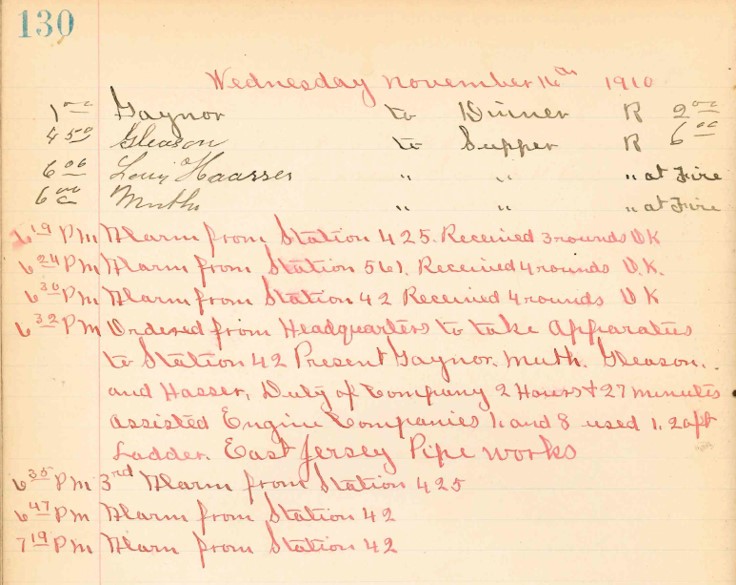 Hancock Collection
October 18, 1910:  The new firehouse for the newly organized Engine Company 10 was about to open. It was to house the first gasoline powered PFD apparatus,  1910 Howe Autocar Fire Engine. There was a major shifting of firemen to staff Engine 10. Note the journal entry below from Chief Stagg reassigning men (as soon as possible). Captain William Boyle of Engine 8 got the prestigious assignment to be the Captain of the new company and Chemical Captain Charles Simonton was reassigned to Engine 8. Lieutenant (and future Chief Engineer) Thomas Coyle was transferred from Engine 1 to 10. 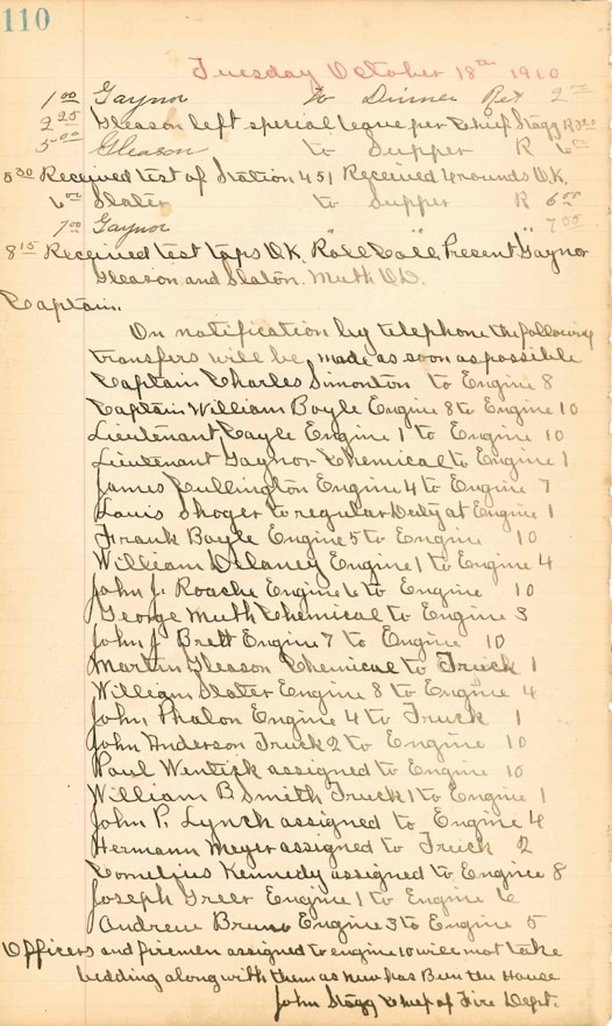 Hancock Collection
June 16, 1911: Chemical Company was ordered "off duty" by Chief Stagg and the apparatus was shipped to James Boyd of Philadelphia, PA. Journal entry is below.

Hancock Collection
With the apparatus out of service the horses [#15 (Kid)  and #65 (Buster)] were transferred to Engine Company 7. One of Engine 7's horses went to Engine 8 and one went to Engine 3. The company's hose, hose mender and pipe was sent to Truck Company 3. The men were transferred by order of Chef Sweeney to other companies (listed in journal entry below) on June 16 and 17th. Finally bedding items went to the Hose House (on Bridge Street) 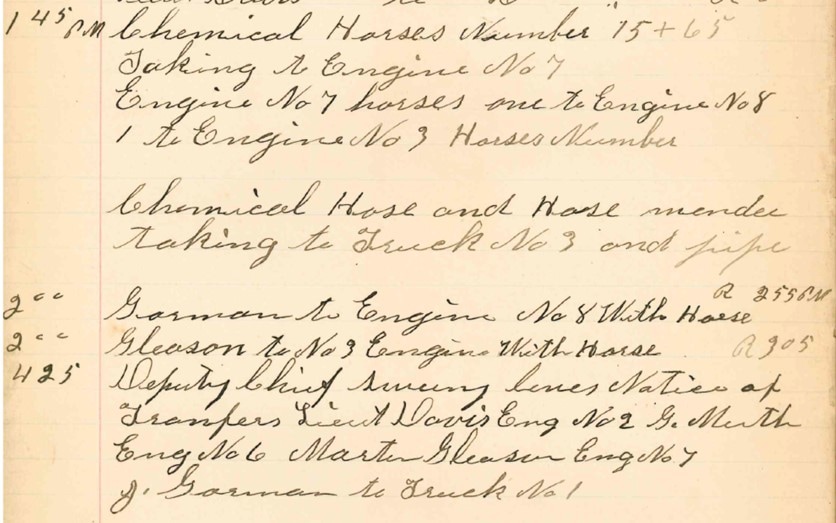 Hancock Collection
The components were rebuilt and motorized: with old equipment mounted on a Boyd auto-body chassis. It was marked as Engine Company 11 in anticipation of a relocation to a new Firehouse being built on Grand Street. The apparatus is shown below at the factory and then after its return outside of the Hamilton Street Firehouse. Notice the crank below front grill. 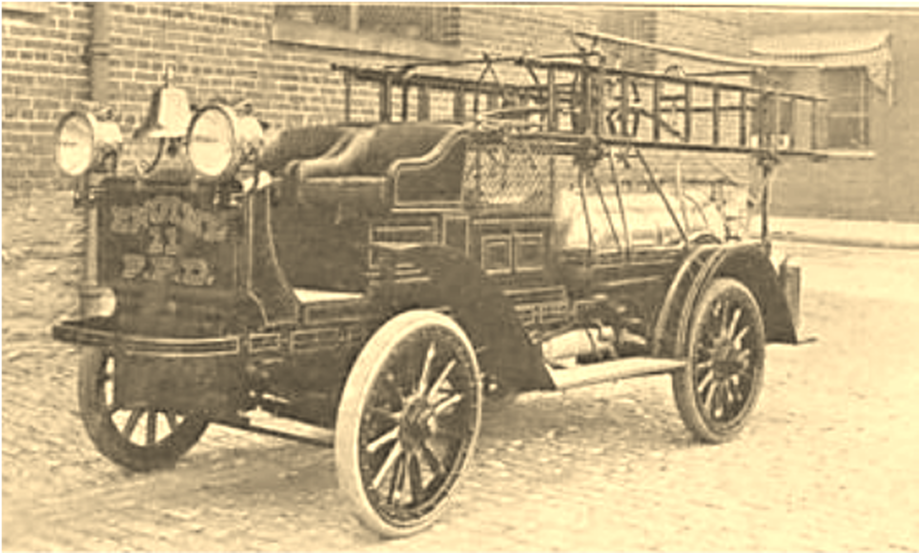 August 14, 1911: Chemical Engine 1 reorganized as Engine Company 11. In photo below is Chauffer Rice (not a Paterson fireman), Lieutenant John Gaynor, F/F Joseph Hughes, F/F James Sweeney and F/F John Roche. Apparatus is positioned along the bank next to the firehouse on Hamilton Street 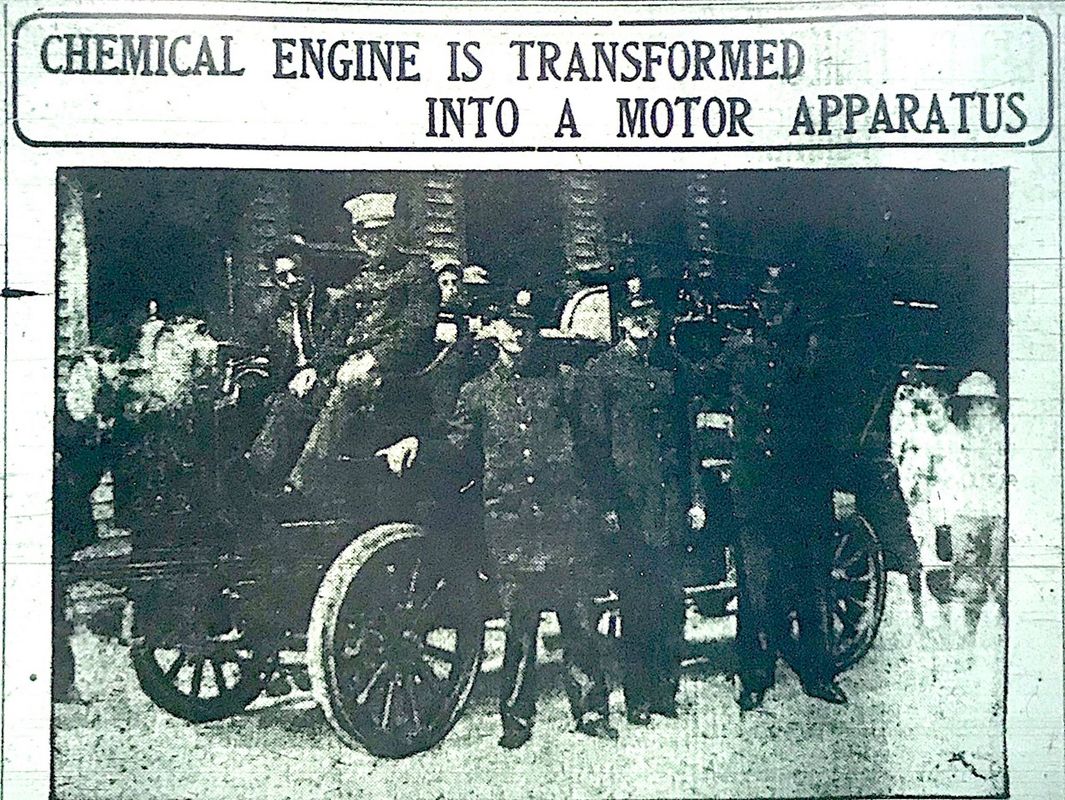 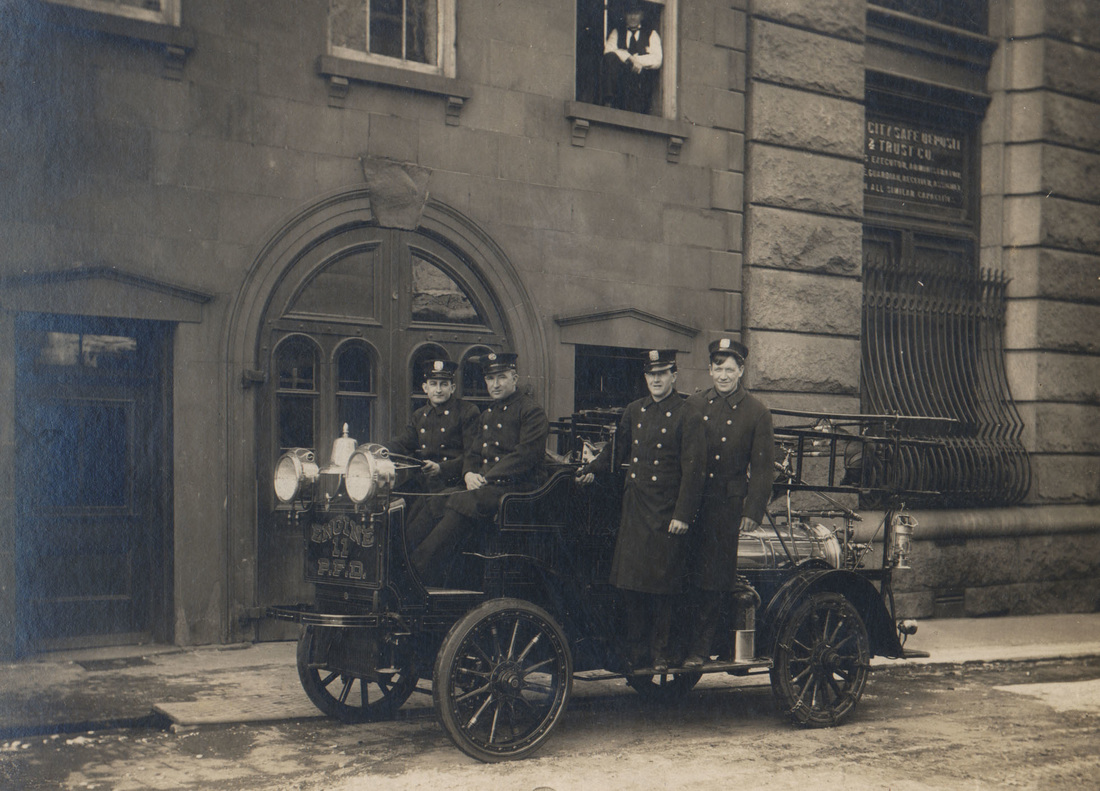 December 26, 1911: Delay in Engine Company 11 moving to new Grand Street Firehouse due to stalled delivery of chemical/hose wagons to Engine 1 and 5. A chemical company was needed in the downtown section of the city. 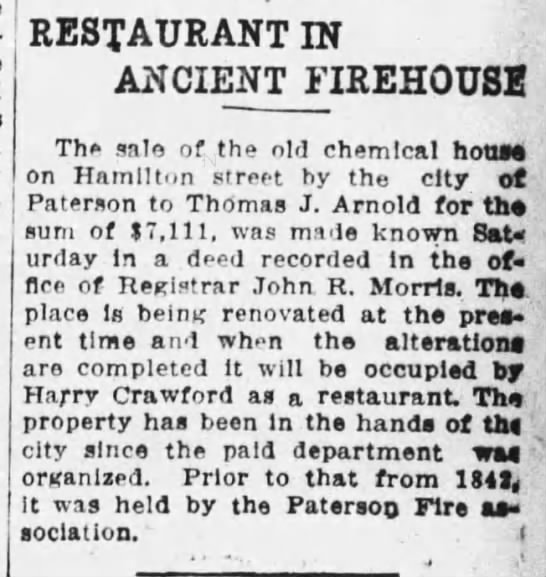