​This company was organized August 9th, 1871, and went into service in April, 1872, in a section of Paterson called Weavertown. They used the #7, formerly used by the defunct Totowa company. Their first engine was an old hand tub of Neptune 2.
​
August 22, 1872: Report on Liberty Engine 7. To use the old Gooseneck hand-tub of Neptune 2 and quartered on York Avenue near the Mission School. 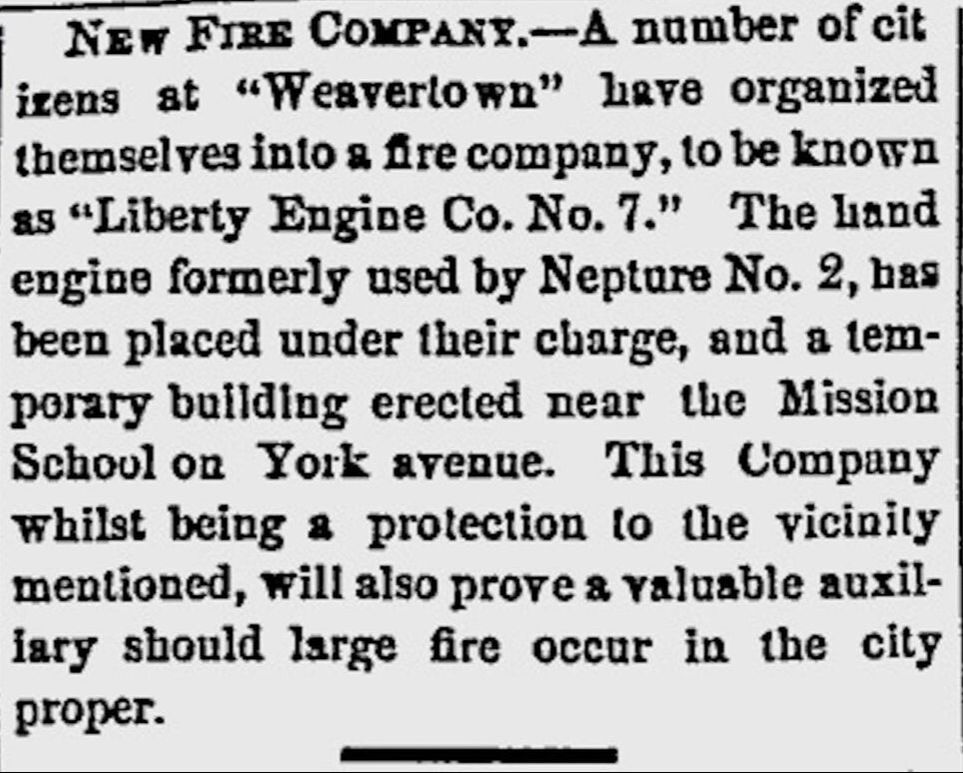 Paterson Press
Subsequently a Van Ness piano-box engine, formerly used by Engine No. 6 and 1. As noted above, they were first located on York Avenue near the Mission School and later in a one-story frame building on the lot at 298 Tyler Street (near Graham Avenue). A brick firehouse was then built on this very lot (seen in photo below). In September, 1879, a single pump Clapp & Jones, was put in service. When the paid department was founded in 1890, the company became Engine Company 7.

Tyler Street between Graham Avenue and the RR (FH in pink) 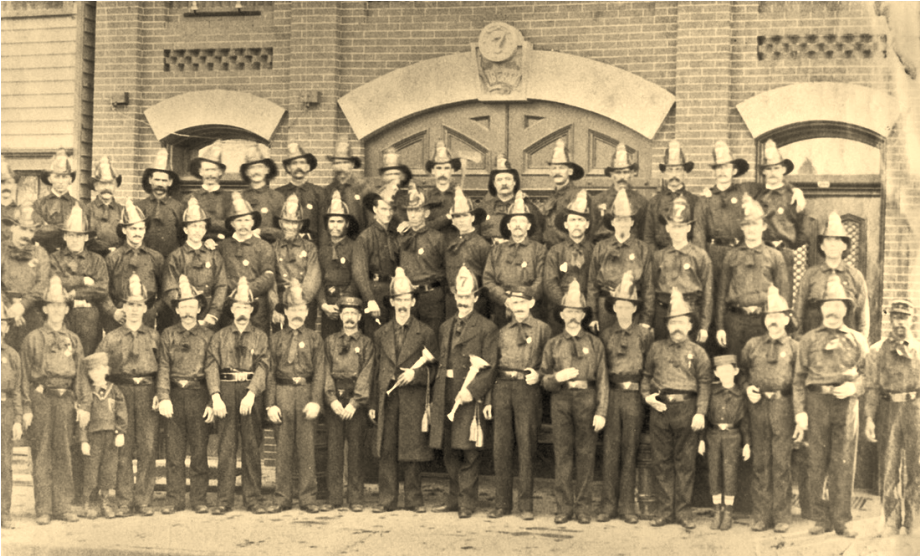 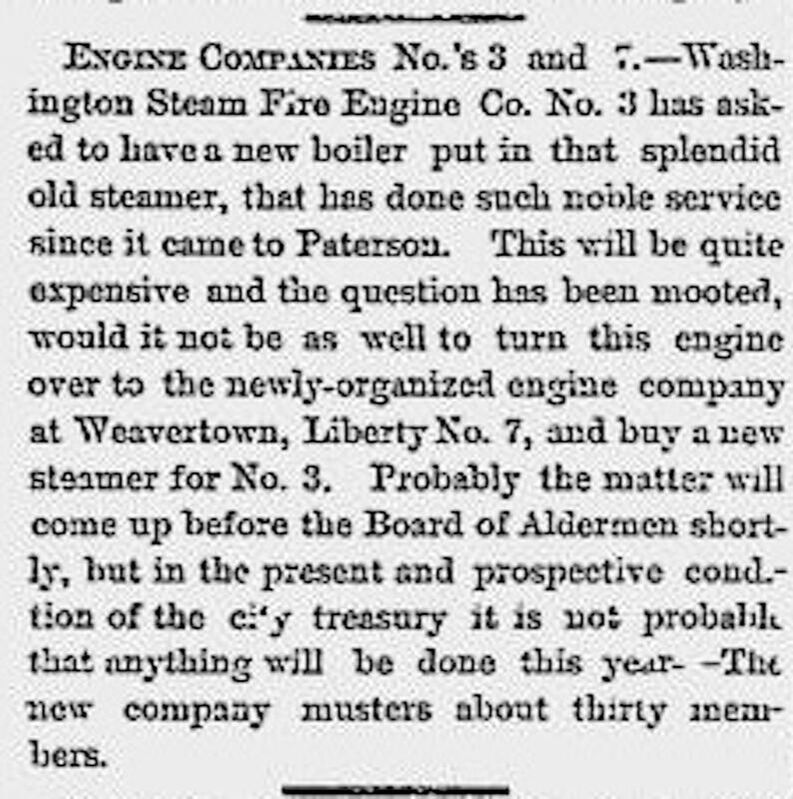 The Press
Unknown Liberty 7 Fireman wearing a shield shaped breast badge and parade belt.
​His uniform cap is partially seen on the stand to his right.
​1873: Foreman: David Trueman  Assistant: Thomas Hardy
Standard Shield Shaped Badge worn by a Liberty 7 member
​(Brass color indicates a non-exempt fireman)
Liberty Engine 7 Fireman's Helmet - the brass finial is broken in (note front of trumpet is missing from the figure) - writing indicates the helmet belong to Daniel Gregory who is listed as becoming  an Exempt Paterson Fireman  on March 7, 1888 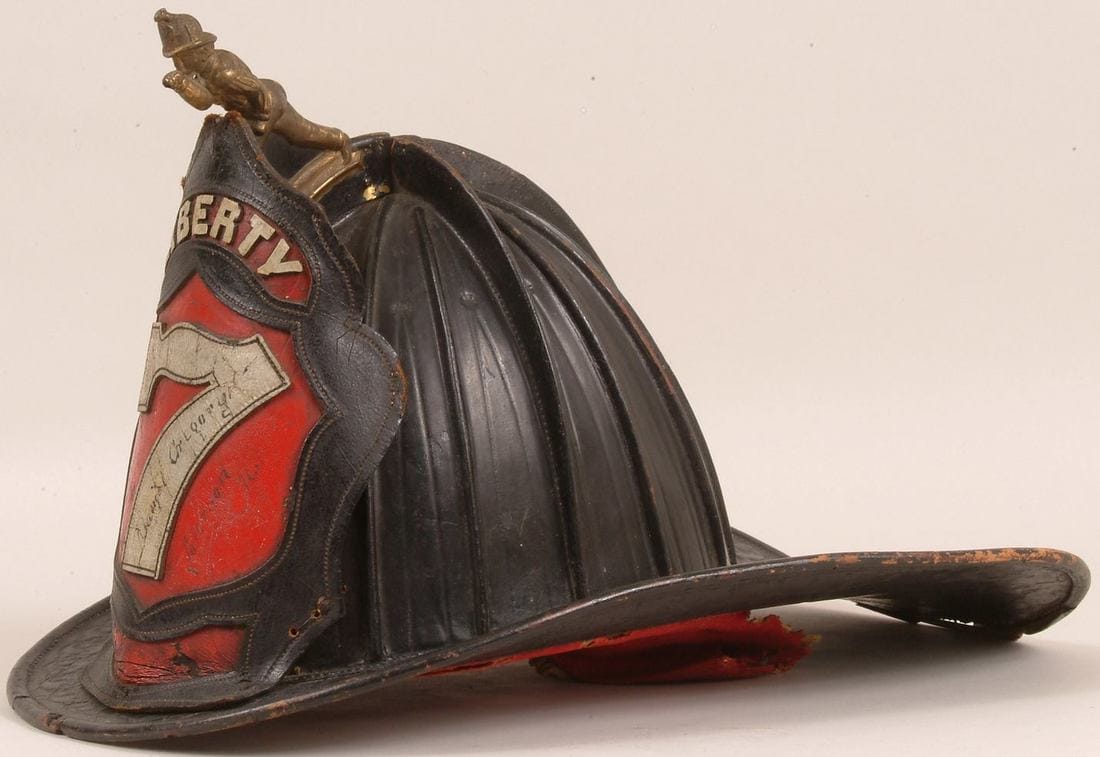 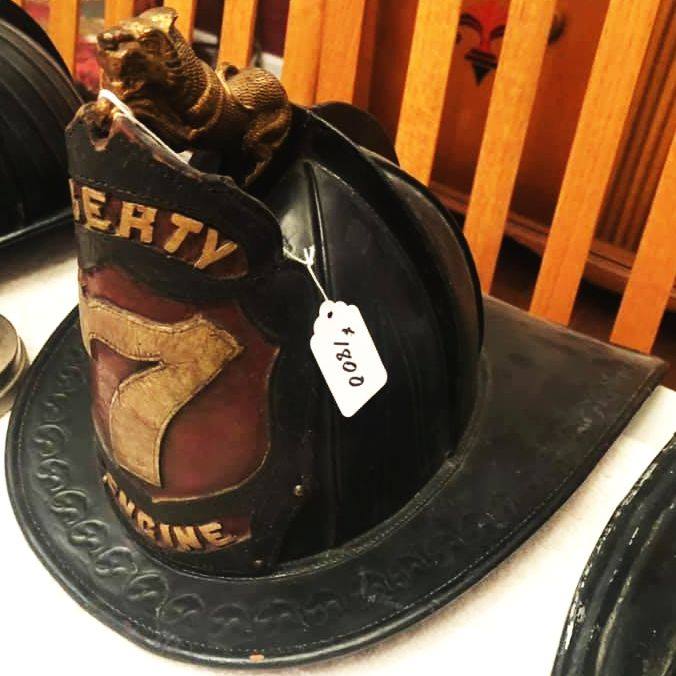 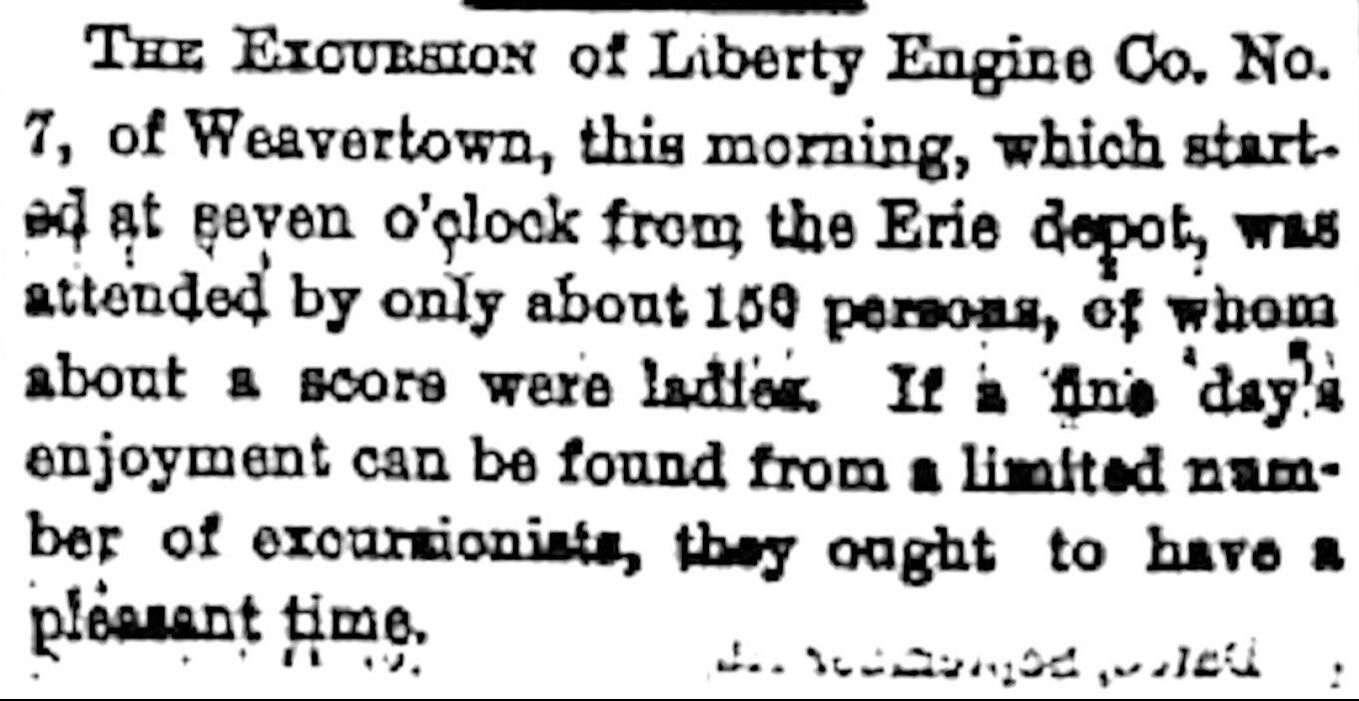 August 7, 1878:  Cornerstone laid for the new firehouse of Liberty 7 on Tyler Street in the section of Paterson called Weavertown.
November 15, 1878: New quarters for Liberty 7 in Weavertown (Tyler Street) finished 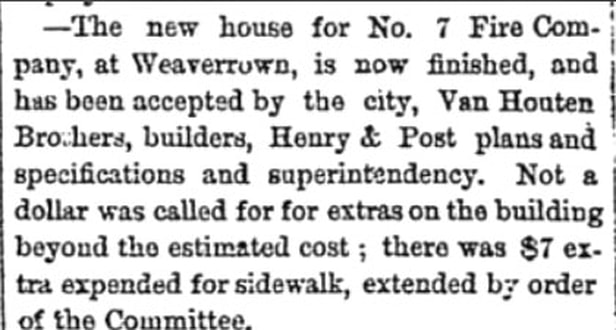 Press
November 28, 1878: House warming at new quarters on Tyler Street for Engine 7 was on Thanksgiving Eve 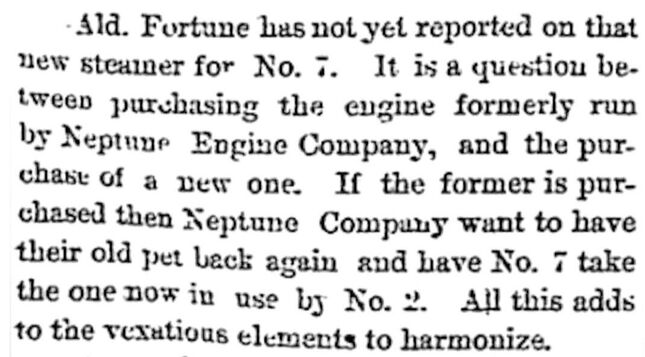 Press
September 11, 1879: Issues of concern to E7 members: their responses and desire for a steamer 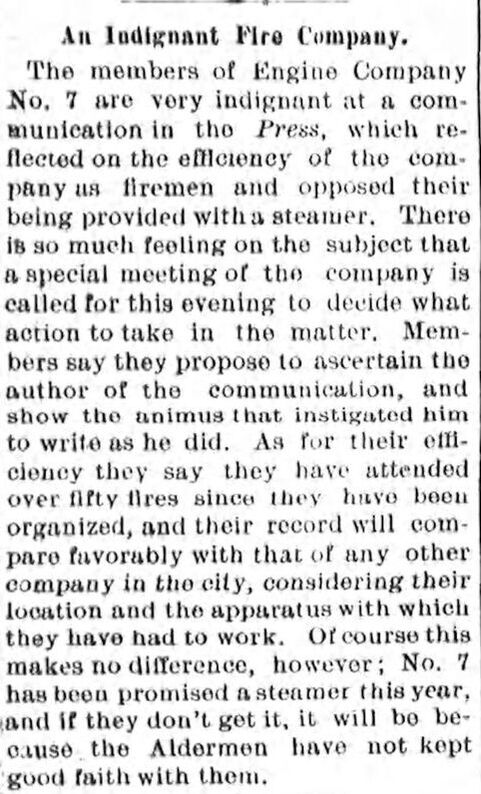 Guardian
September 17, 1879: Arrival of Clapp and Jones Steamer for inspection - The debate is between this (preferred by many F/F)  and a lighter engine.
View of the 1879 single pump Clapp & Jones Steamer outside the firehouse 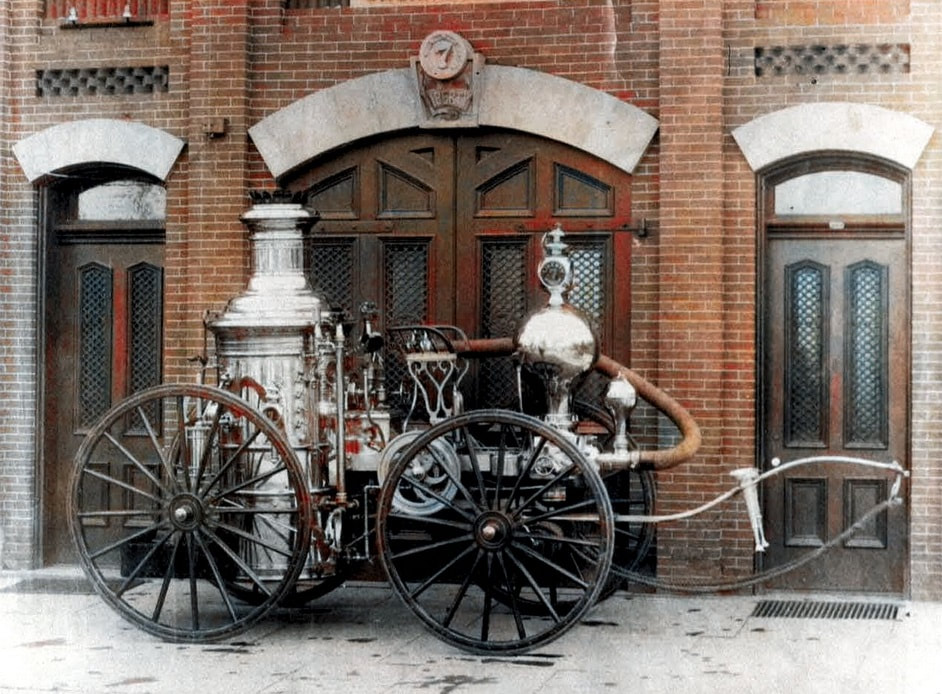 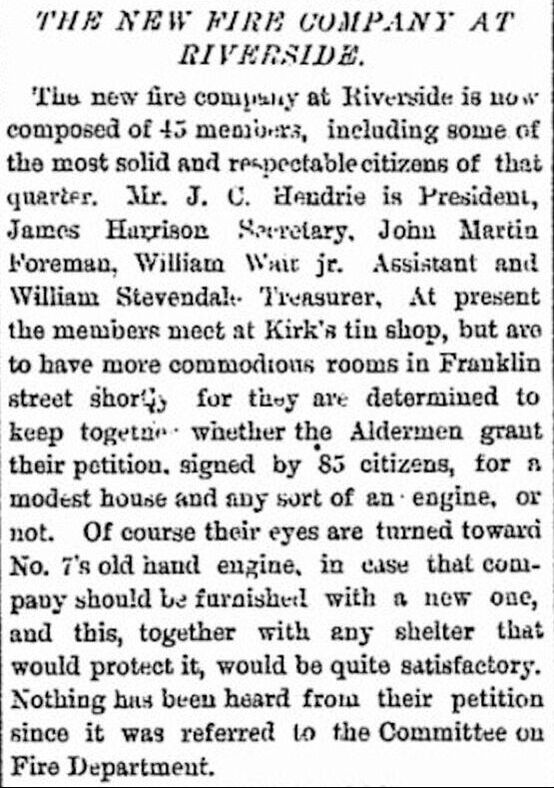 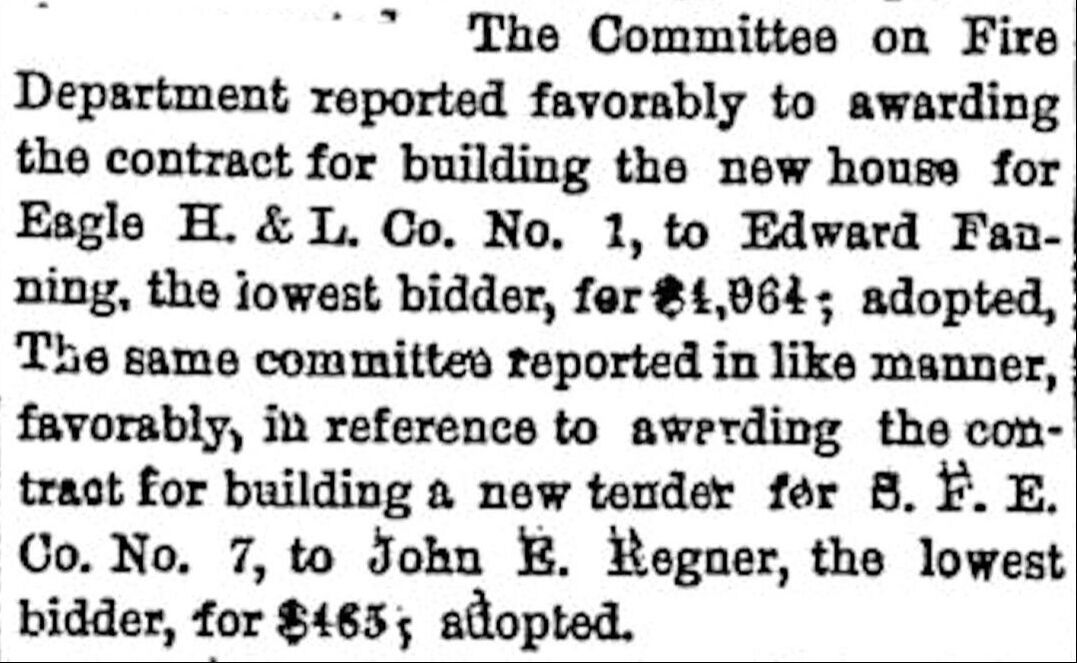 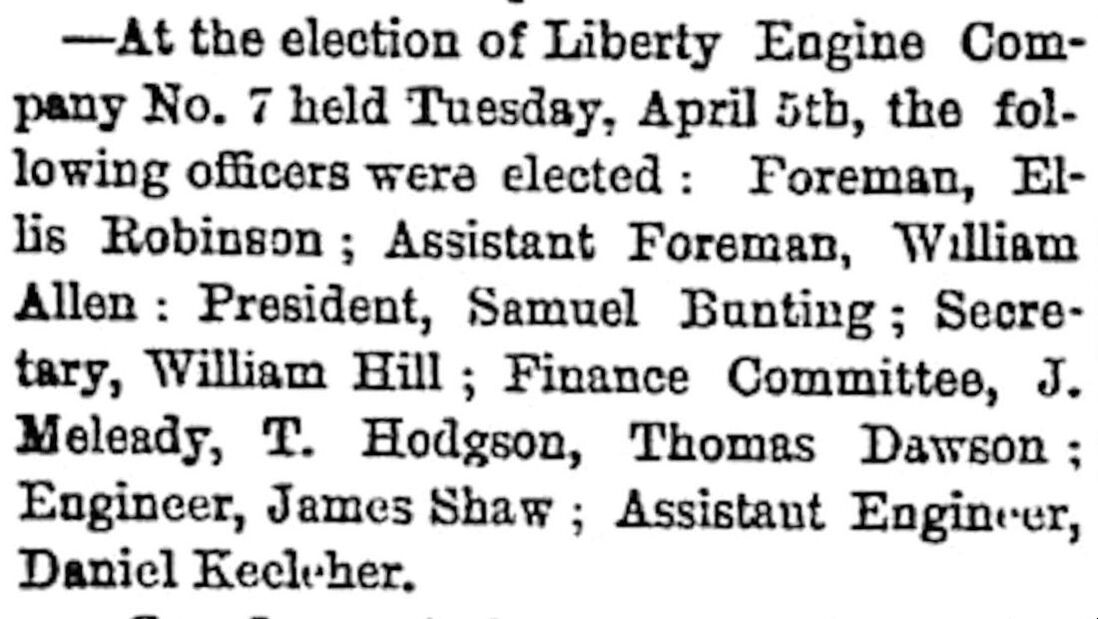 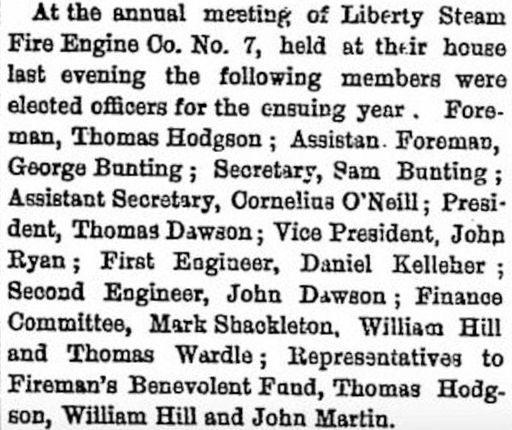 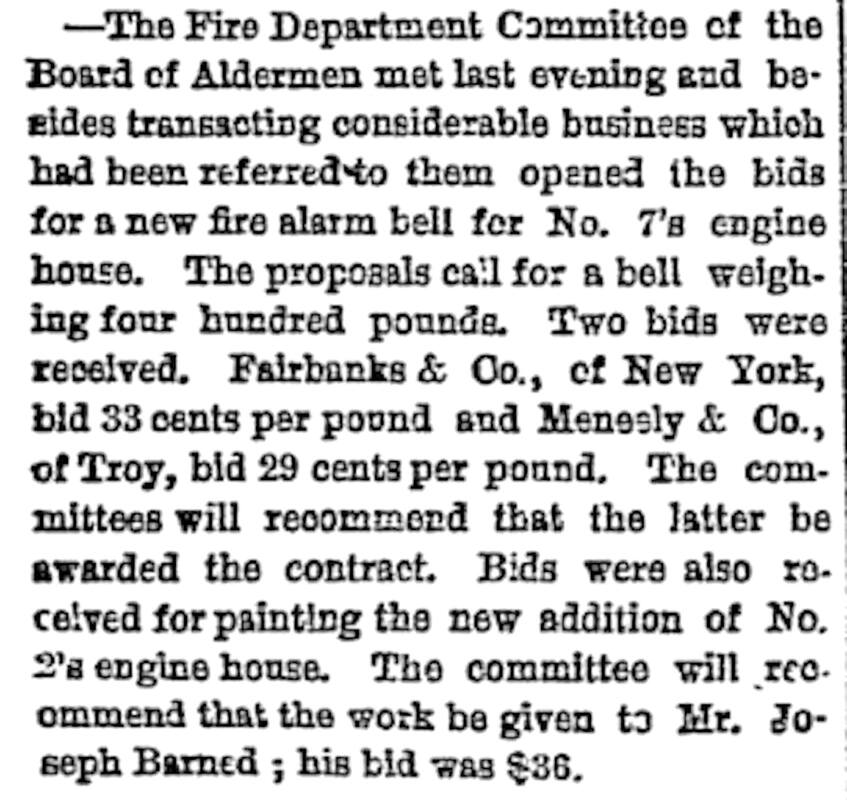 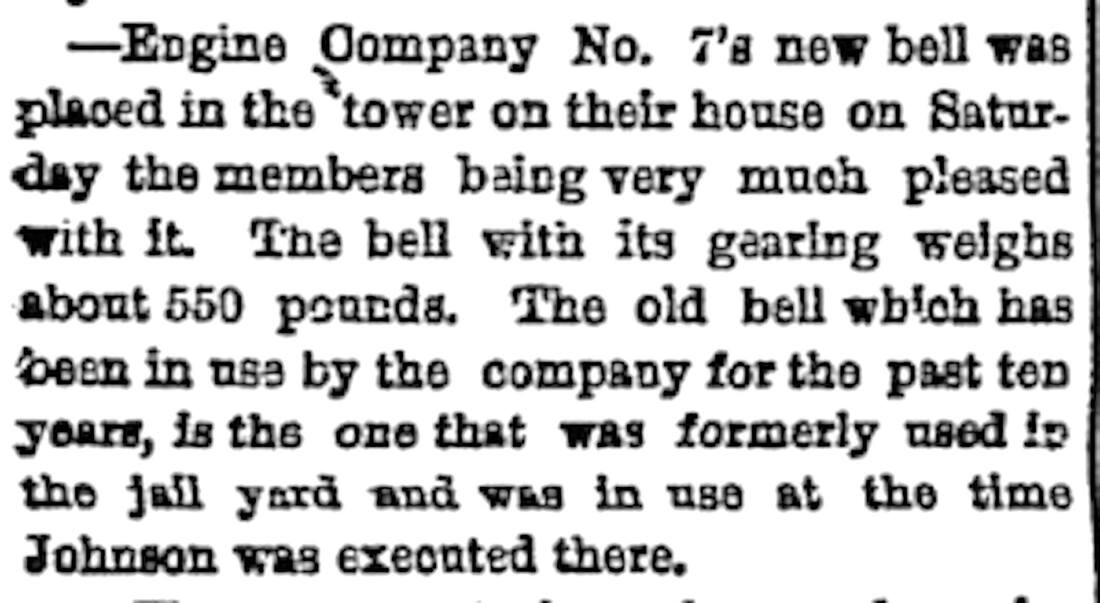 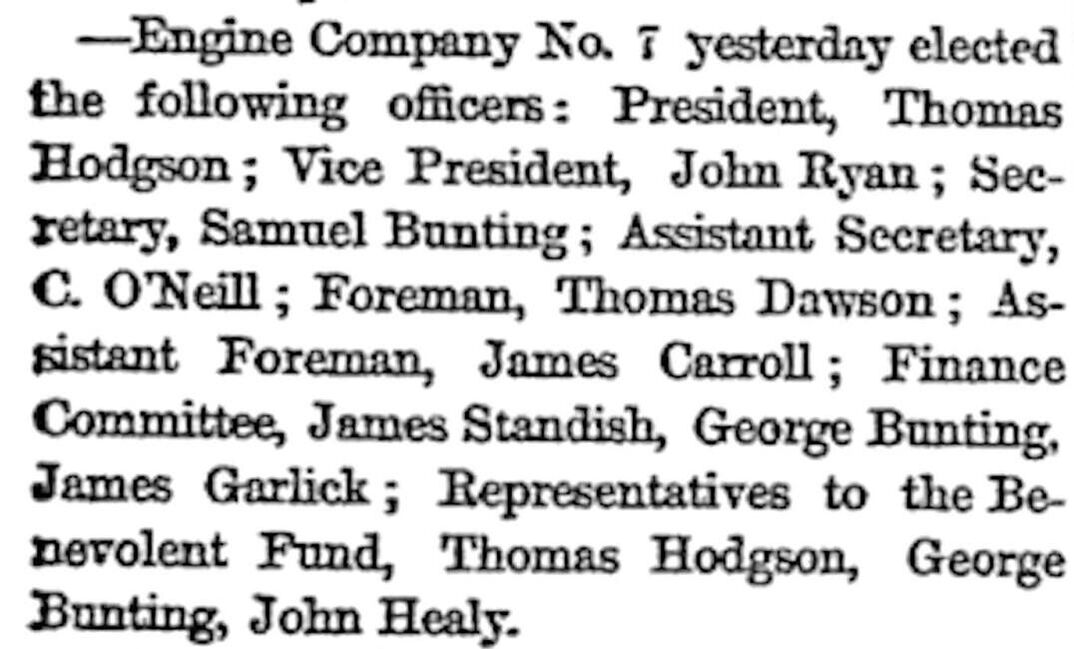 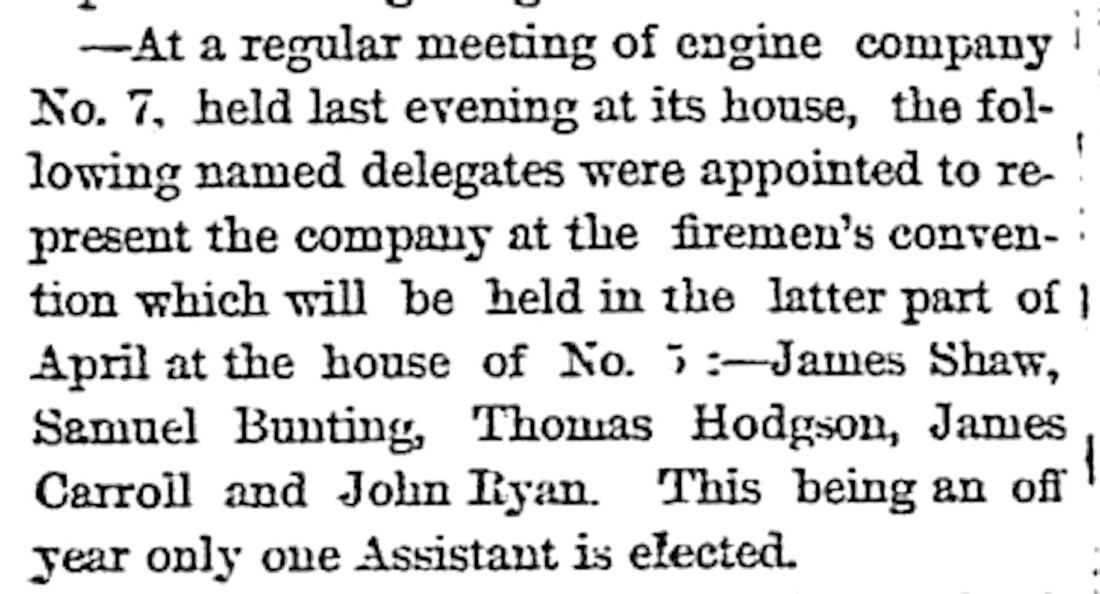 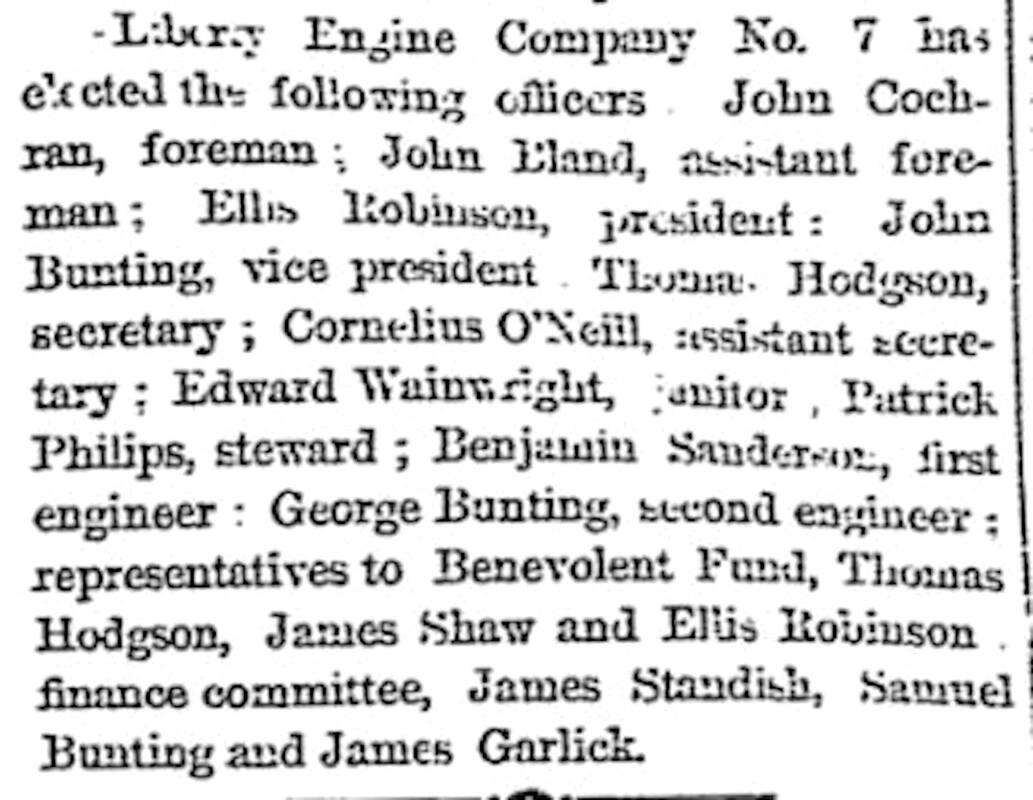 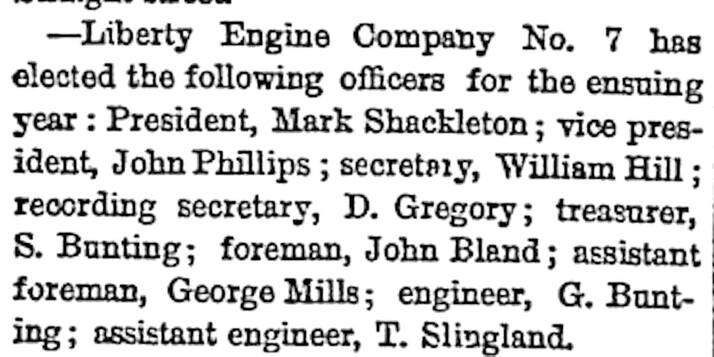 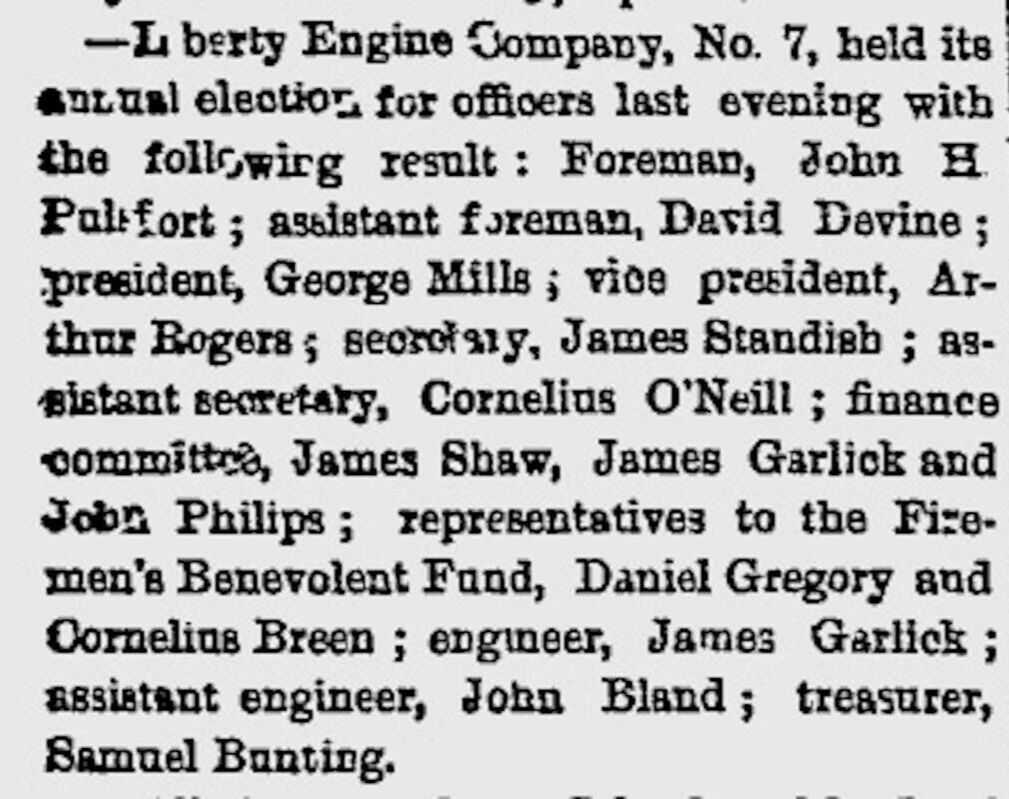 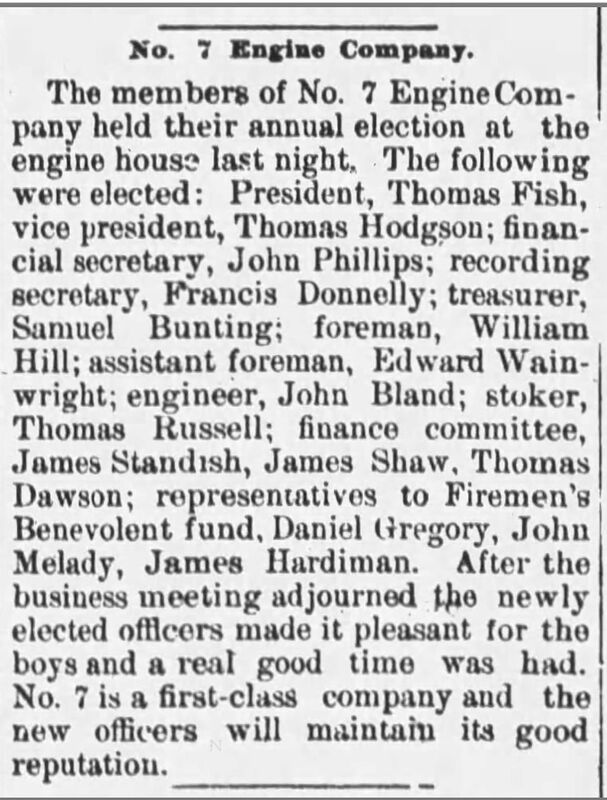 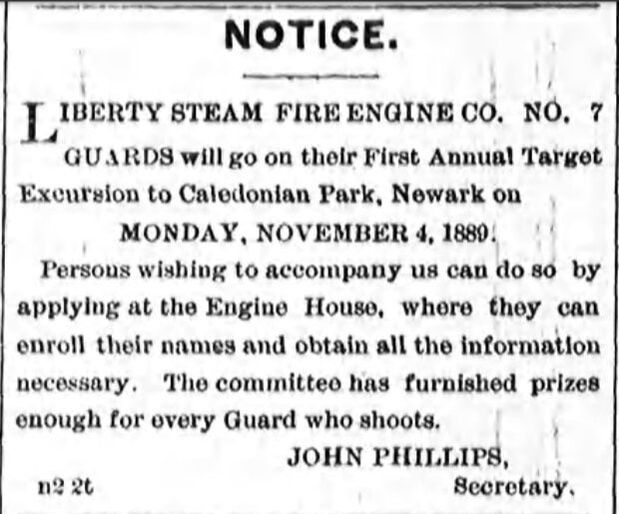 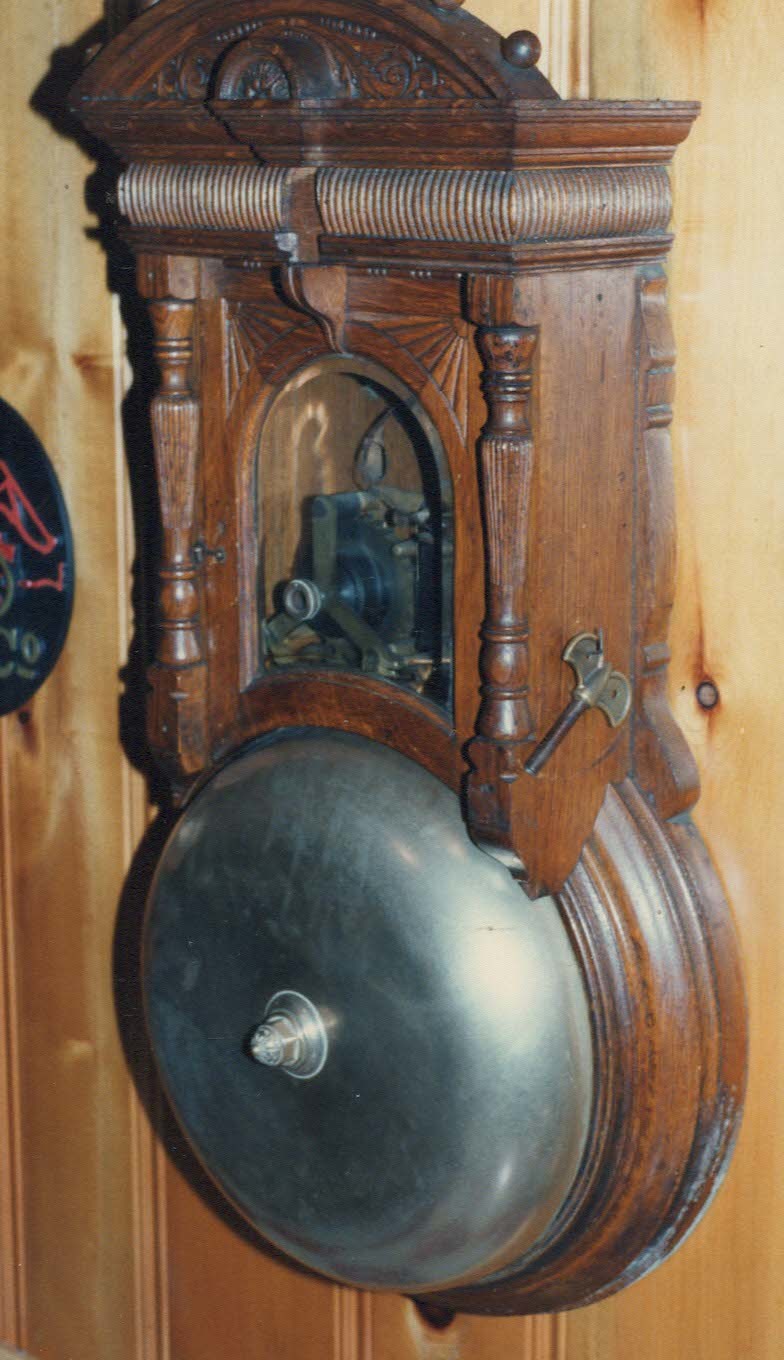