Presentation shields are large beautifully designed and decorated  "shield-shaped" leather pieces give from gifts from one Volunteer Company to another usually during visits and parades. 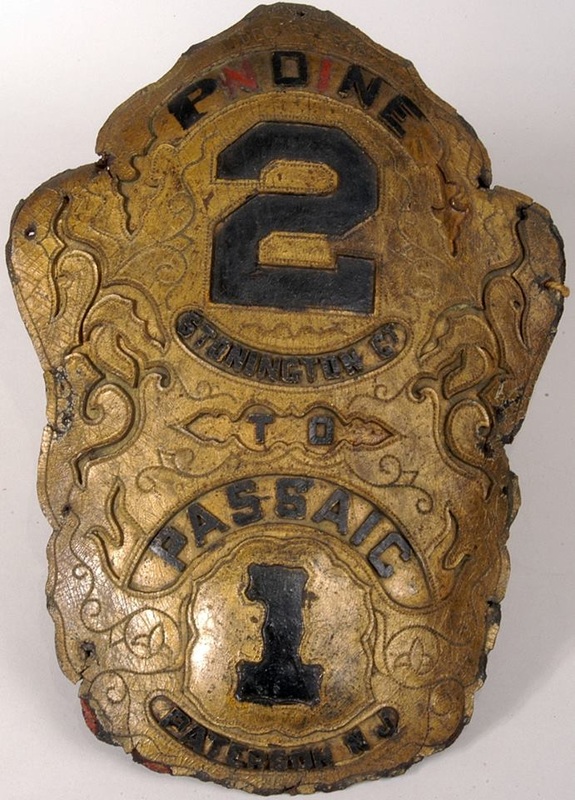 From Stonington, CT to Passaic Engine Company 1 of Paterson 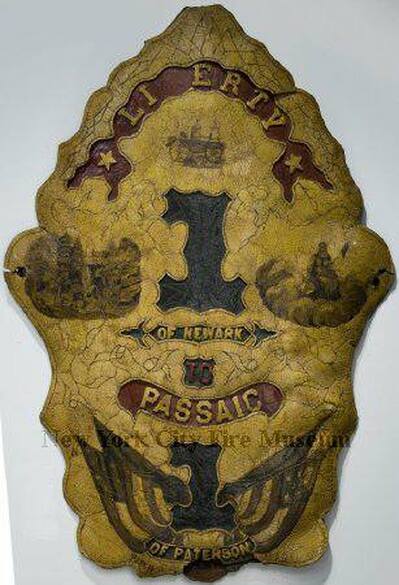 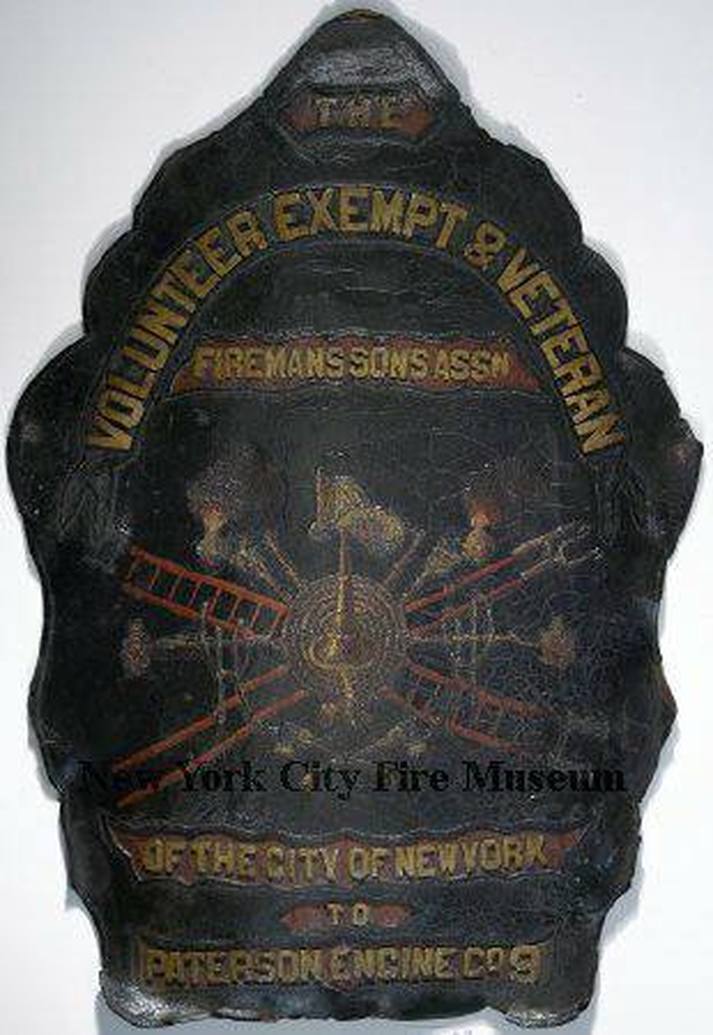 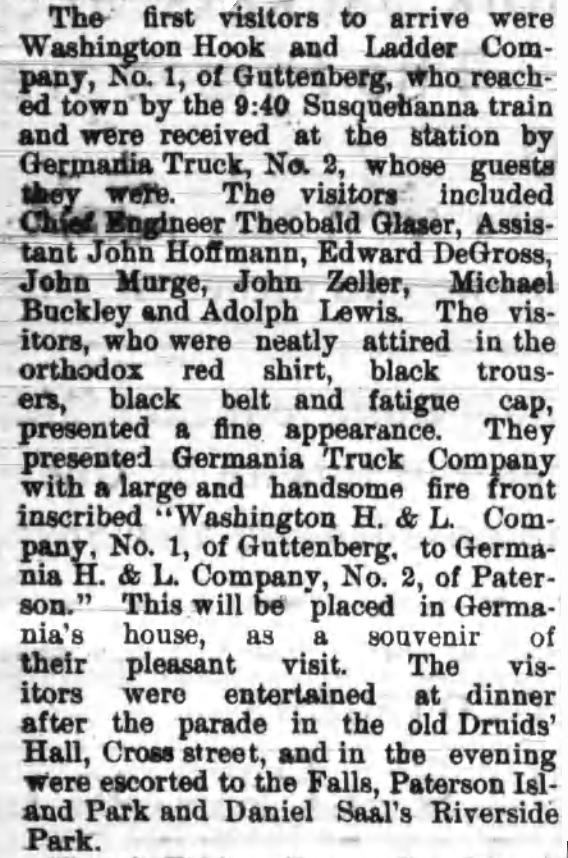 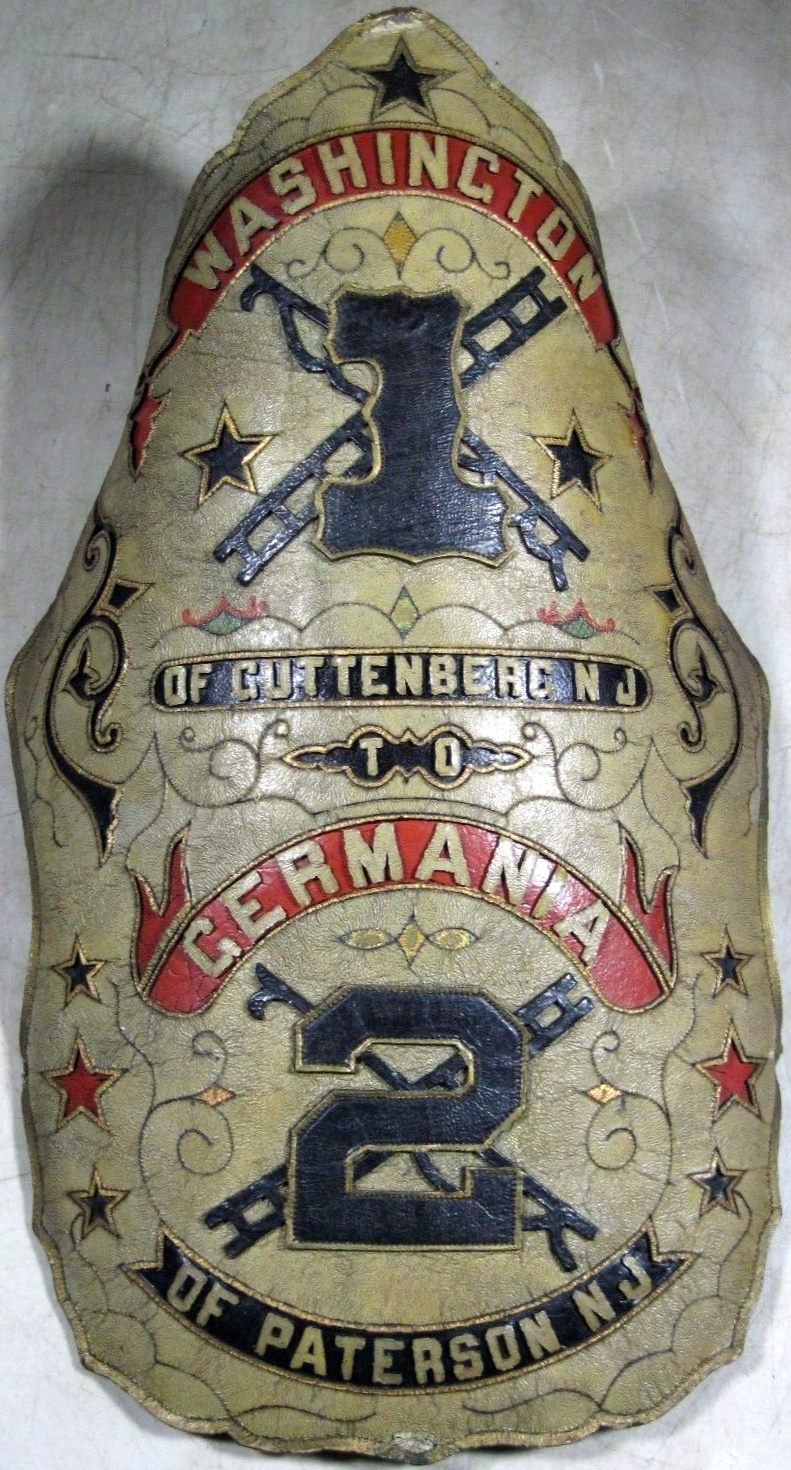 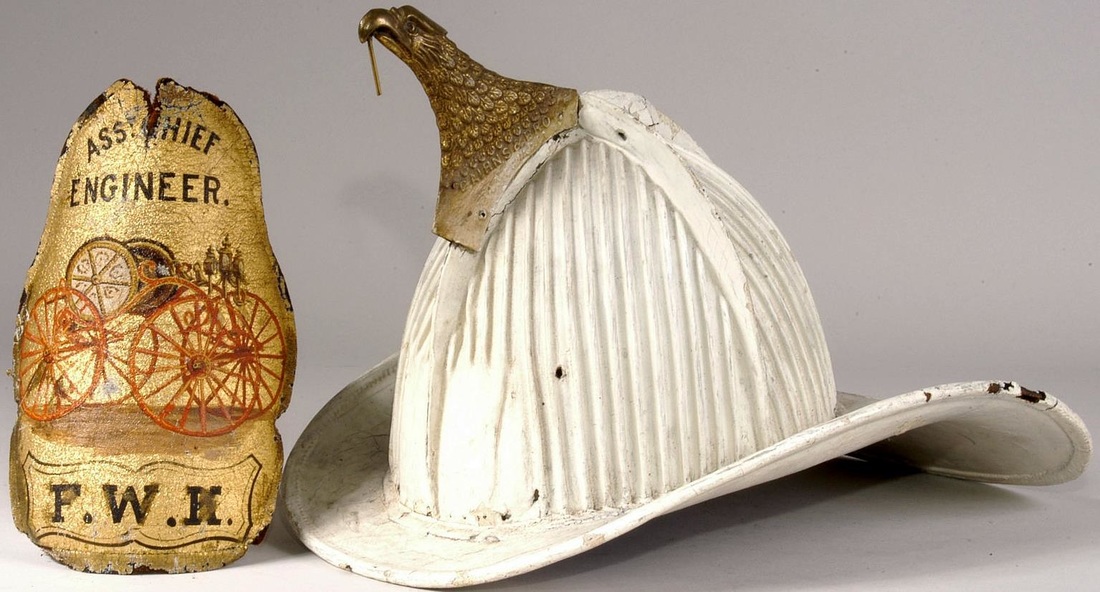 This leather fire helmet, now in the Smithsonian Museum, was made by Cairns & Brother of New York, New York  (before they moved to Clifton, NJ). This helmet was that of Frank W. King of Paterson, a Volunteer Assistant Chief Engineer from 1886-1888.  The presentation medallion on the rear brim was likely added sometime after is term expired in 1888. The leather helmet is painted white and has sixty-four combs with a high metal eagle finial mounted on the crown. The brim has a stamped scrolled border, with two hydrants flanking an emblem-shaped brass medallion in the rear that bears the engraving "Frank W. King, Ass't Chief Engineer, 1886-1888." The painted leather shield bears the text “ASS’T CHIEF/ENGINEER and his initials "FWK" and an image of a spider-type hose reel in the center. Frank W. King had been a member of the Hibernia Hose Co. No. 3 (which the painting depicts) and served as the company's secretary before his election to Assistant Chief Engineer, with its standard two years of service. He was a machinist by trade. 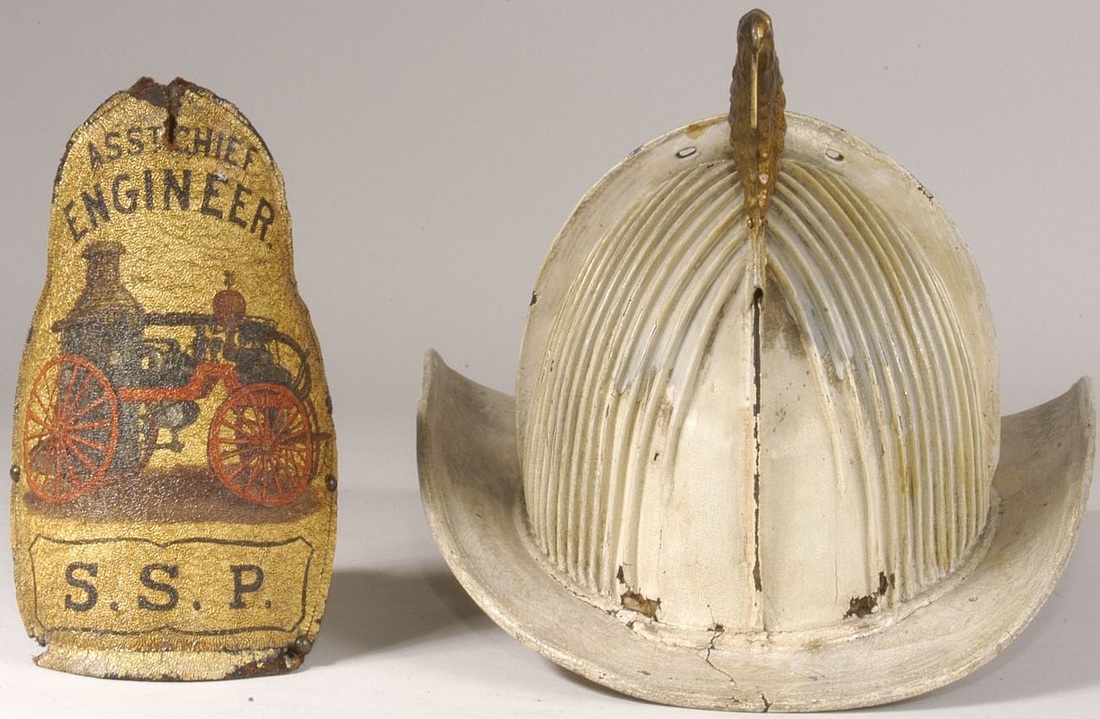 This leather fire helmet, now in the Smithsonian Museum, was made by Cairns & Brother of New York, New York before they moved to Clifton, NJ. This helmet was likely presented to Samuel S. Pounds of Paterson, New Jersey after he finished his term as assistant chief engineer from 1884-1885.The leather helmet is painted white and has sixty-four combs with a high eagle finial mounted on the crown. The rear brim of this hat displays a stamped scrolled border, two embossed hexagonal hydrants with hoses, and an engraved plate that reads "presented" to "Samuel S. Pounds, Assistant Chief Engineer, P. F. D. 1884-1886." The leather frontpiece bears the text “ASS’T CHIEF ENGINEER and his initials "S.S.P." The shield has a painted image of a steam fire engine in the center. Samuel Pounds had previously been a member of the Lafayette Steam Fire Engine Company No. 8 on Wayne Avenue. He was a machinist by trade.

Chief Turnbull's helmet from his tenure as a Chief (1877-79) in the volunteer department. This white leather helmet has 24 combs, a high eagle finial, and a rear brim embossed with an image of a hoses, hooks, ladders, lamps, and horns. A metal medallion sits in the center of the image with the engraving “David I. Turnbull, appointed May 1, 1889.” The shield reads “CHIEF/D.I.T.” with a painted central image of a fire trumpet with a helmet perched on top and a variety of firefighting tools crossed behind the trumpet. David Turnbull also was appointed Chief Engineer by the Paterson aldermen, serving from May 1889 until May 1890, making him the first Chief Engineer of the paid department. The helmet is in the Smithsonian Museum collection

This leather fire helmet was made by Cairns & Brother of New York, New York during the late19th century. The helmet consists of 64 combs and is painted white. There is an ivy vine scroll pattern around the brim and a small metal frontpiece on the rear brim that is engraved. A high eagle finial is mounted on the top of the helmet’s crown. The gold-painted leather shield has a central image of a steam powered fire engine, with the text “CHIEF/ENGINEER/P.F.D.” John Stagg served as Chief Engineer of the Volunteer Fire Department from 1887 thru 1888, and was made chief of the paid Paterson Fire Department in 1891. The helmet is in the Smithsonian Museum. 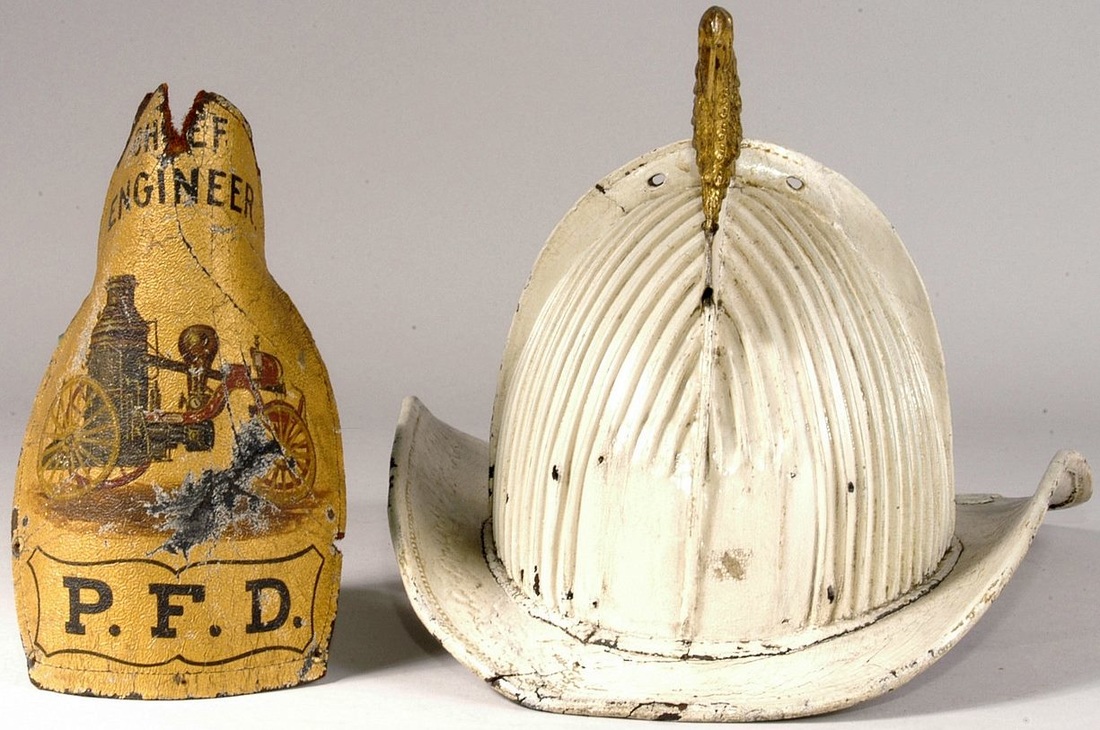 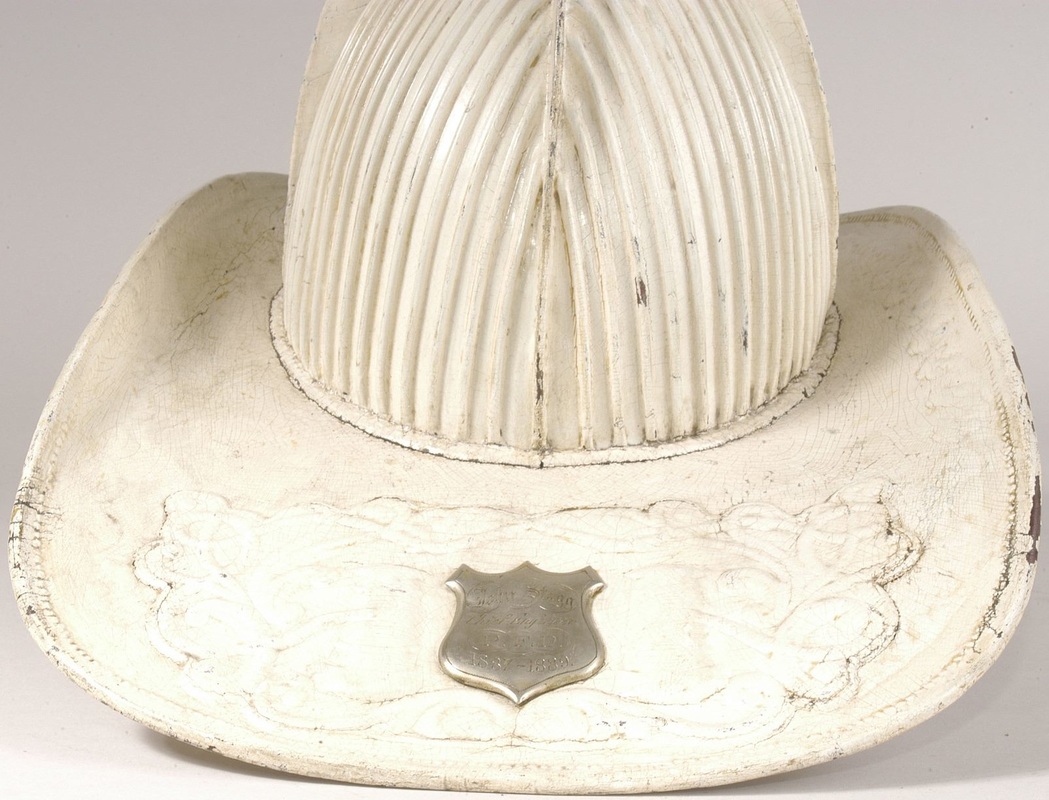 Peter Zeluff was a legendary Paterson fireman. He was an assistant chief in the Volunteer Department in 1883 and when the department went paid he became Superintendent of Fire Alarm and held that job for decades. He lived on the corner of Temple Street and North 9th street. In the picture below, his spectacular preserved helmet, now  at the Smithsonian is a 16 coomb helmet with high eagle finial and painting of what looks like Cataract Hose Company 2 which was quartered at the Godwin Ave and Auburn Street firehouse. 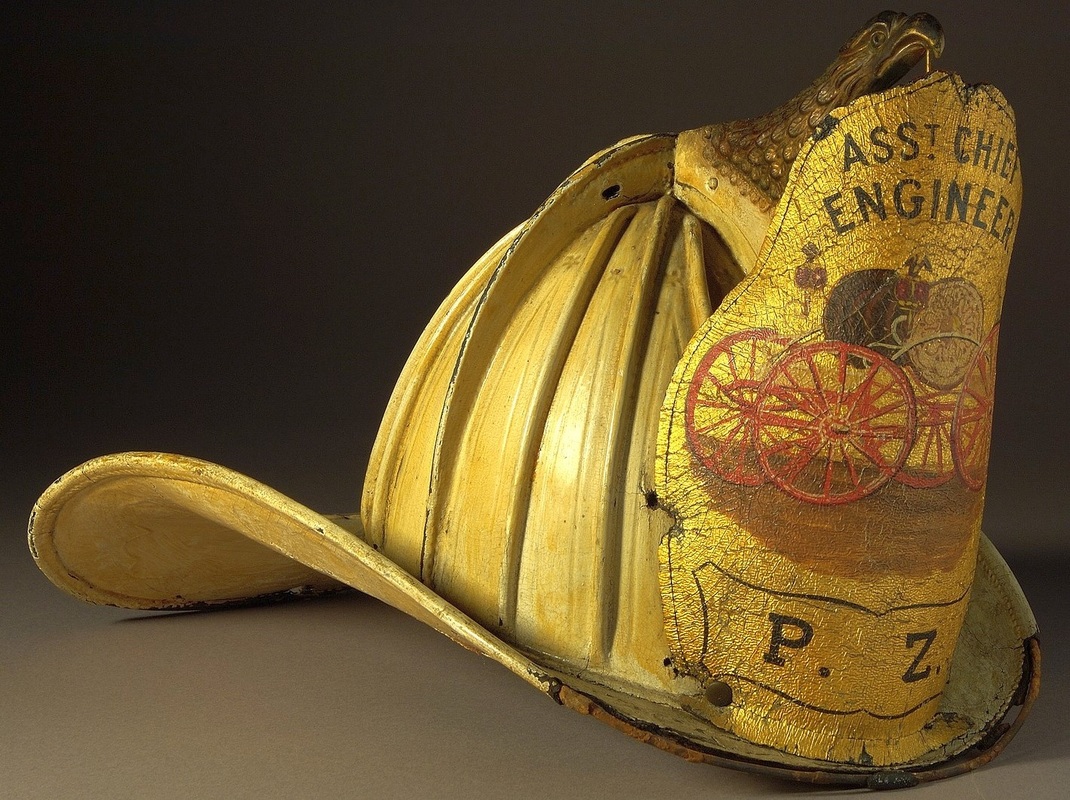 Below are aditional photos of Peter Zeluff: at top during his tenure as assistant chief (L to R are Zeluff, Chief John MacDonald and Assistant Chief Samuel S Pounds) and at bottom is a cabinet photo at left as Superintendent of Fire Alarm in paid department 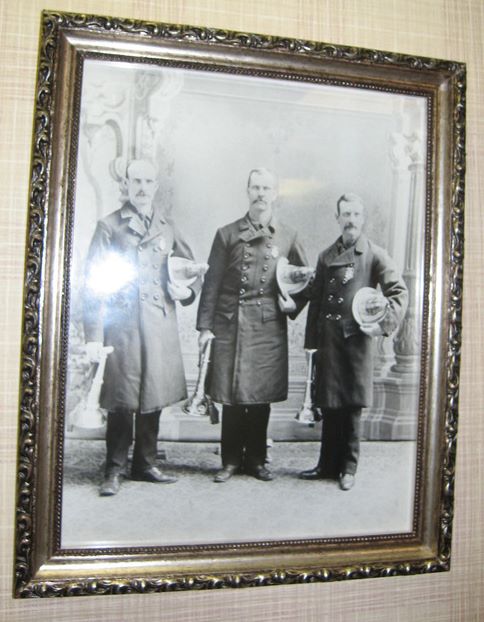 Below are Paterson Fire Department Volunteer era helmets which are not from the city of Passaic. After 1871, the company ran out of quarters located at 112 (not 115) Van Houten Street near Washington Street 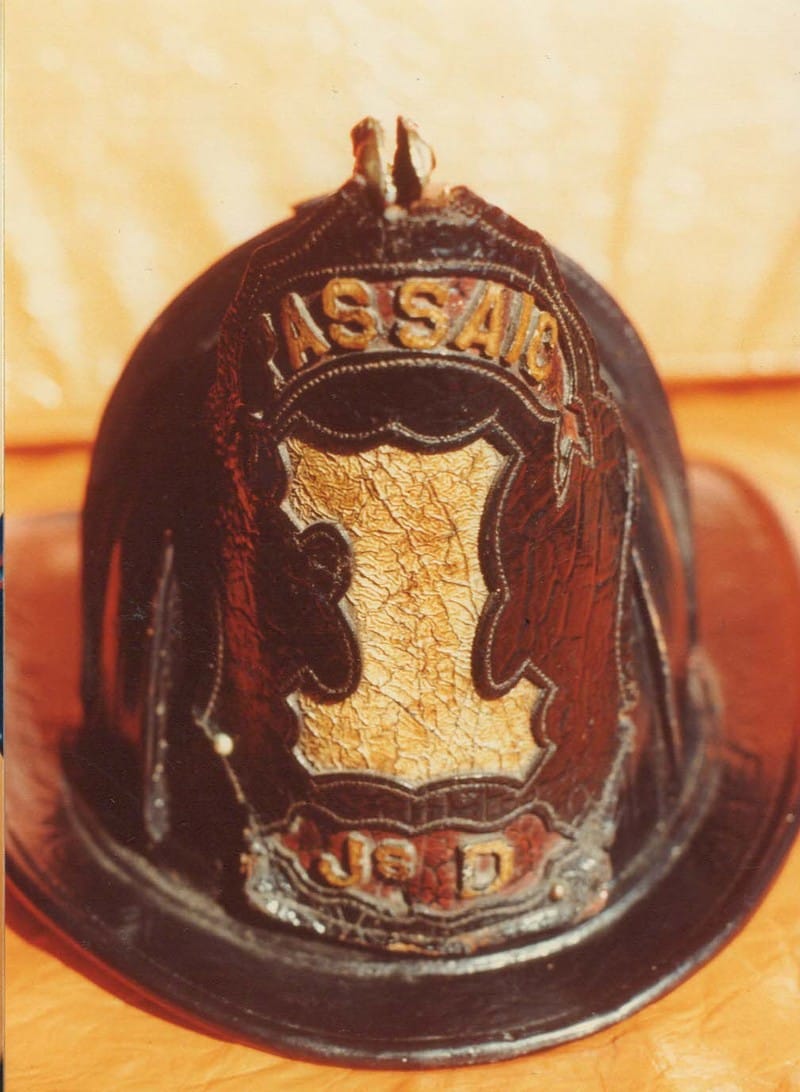 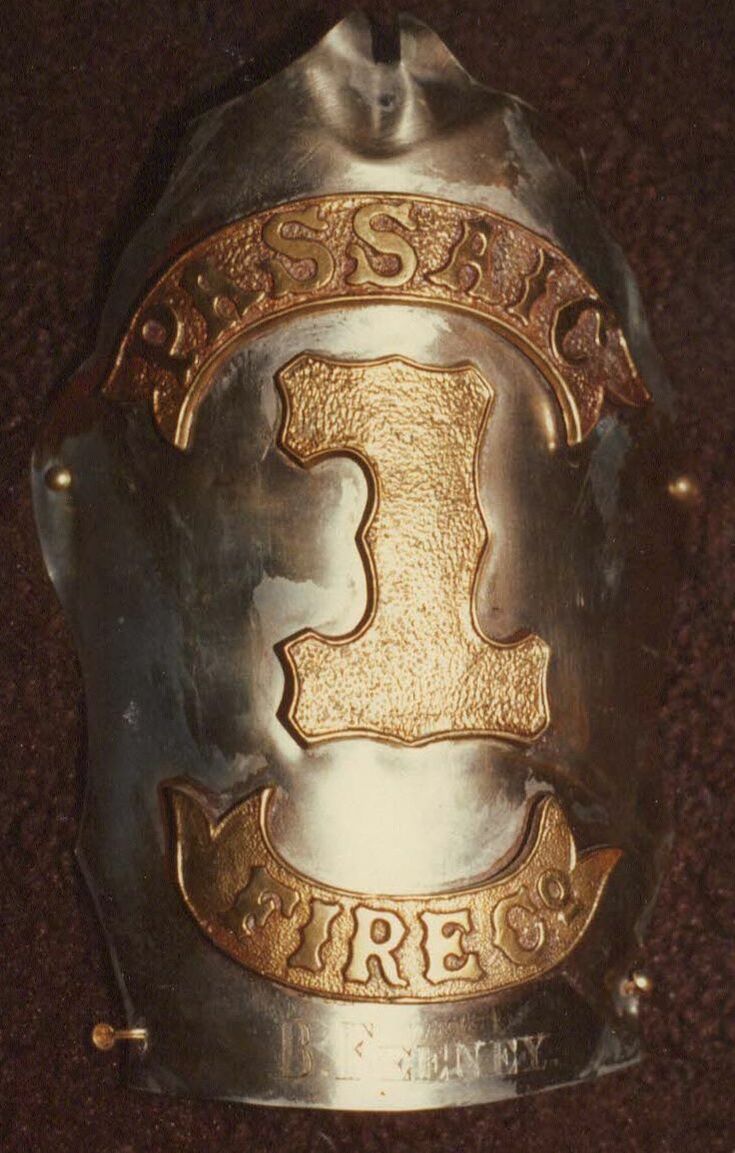 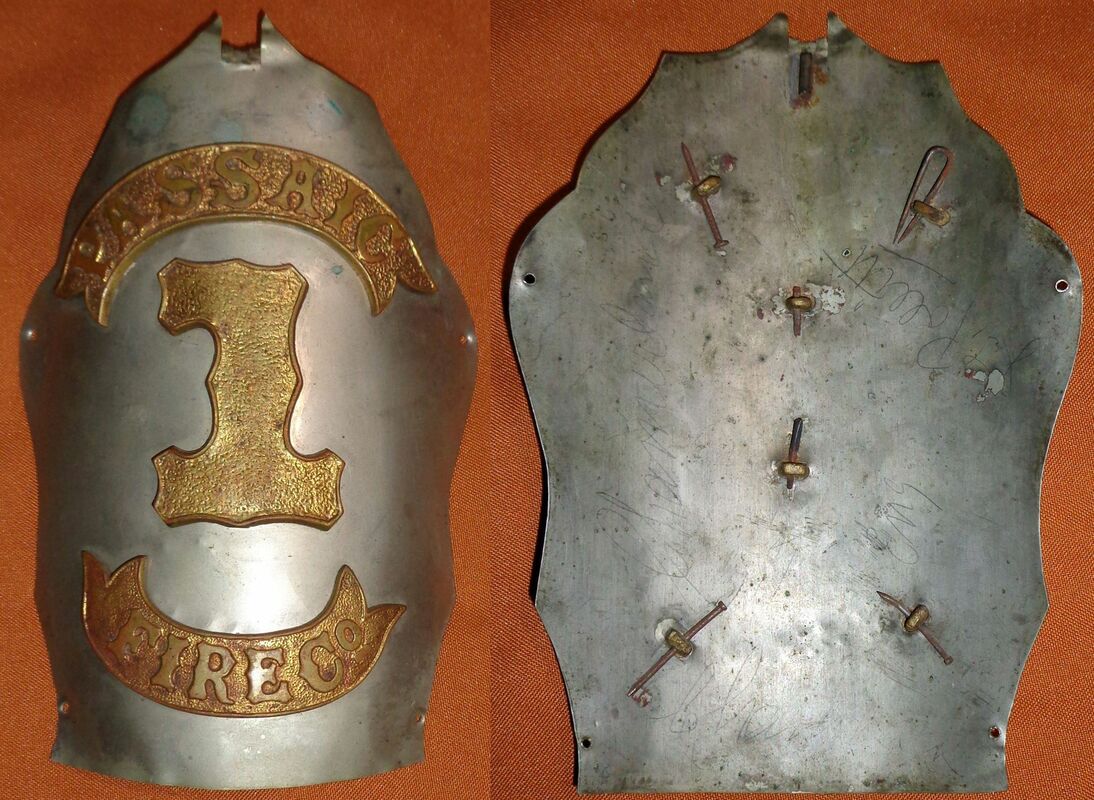 Fireman Charles Moore s was the patriarch of the Moore Funeral Home family and served with Neptune Engine Company 2, which at that time was quartered at the Hotel Street Firehouse on Hotel (later called Hamilton St). This collection depicts his spectacular helmet which has a Firemen with Trumpet Finial and his initials on the shield, as well as the Parade Belt and company ring (a rare collectible) -- all courtesy of Moore Family 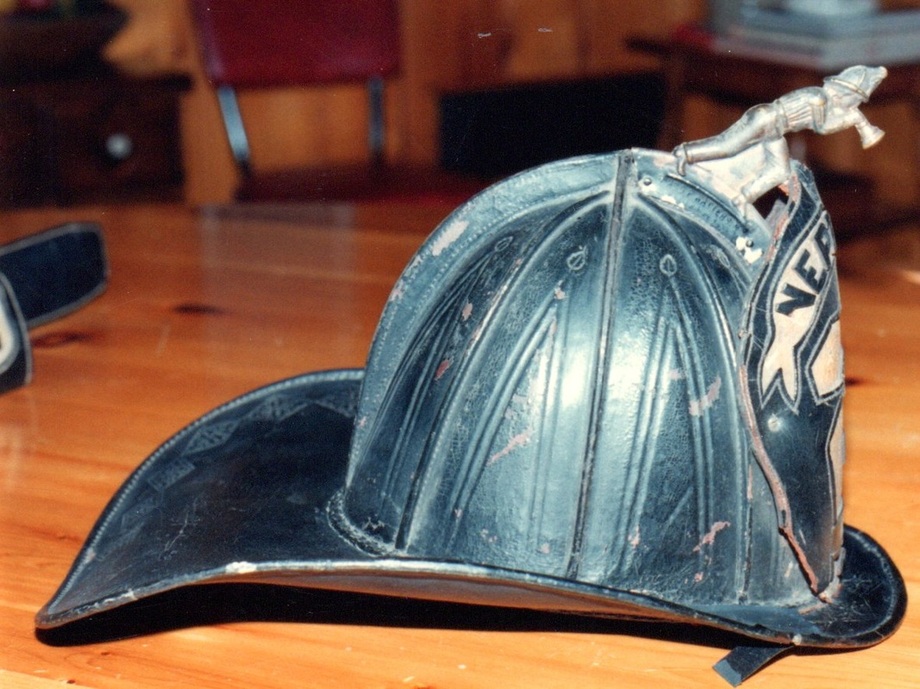 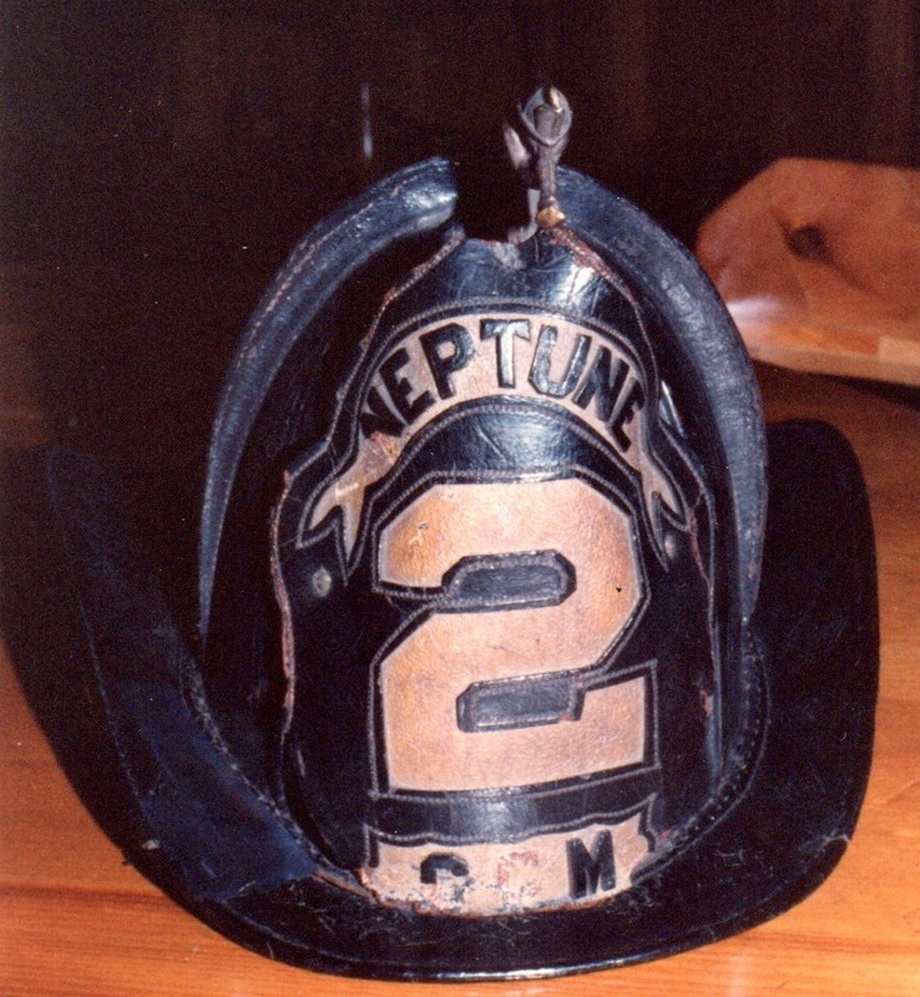 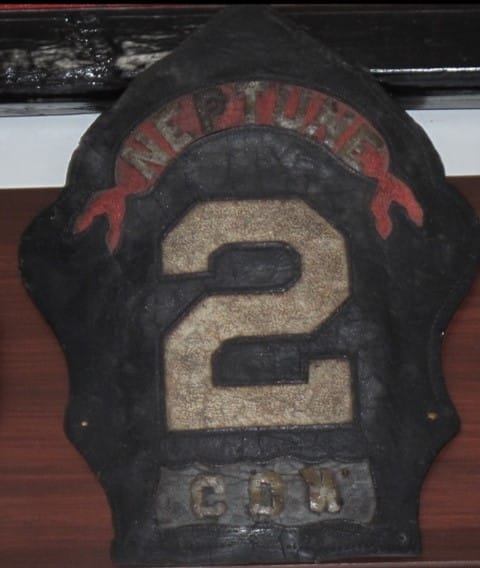 The brass slide was used to hang a cap or helmet 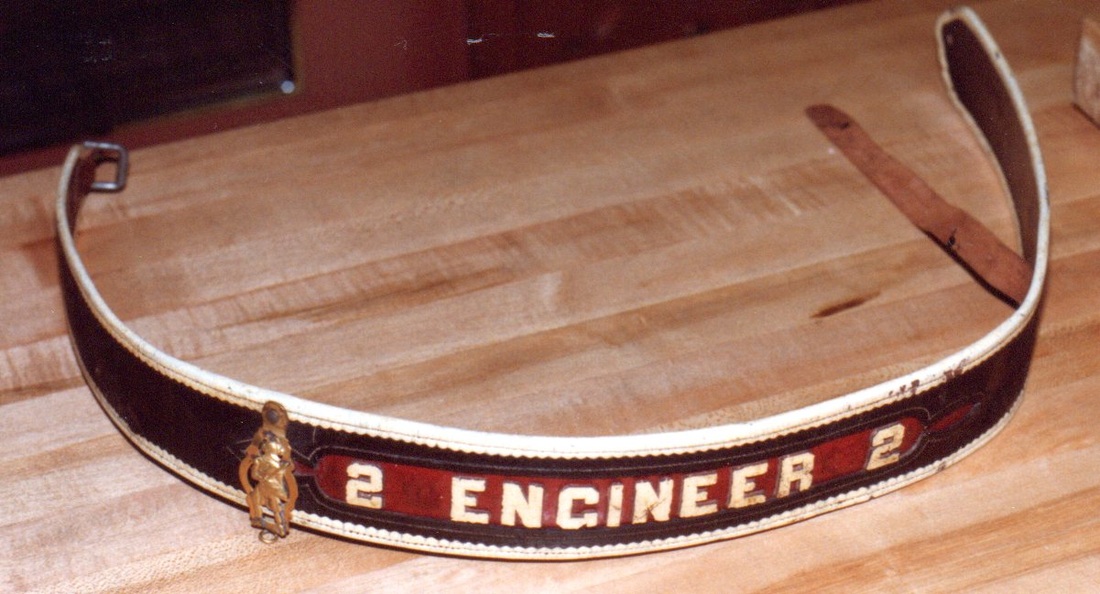 Washington Engine Company 3 was organized in 1821 and after 1856 ran out of the firehouse  at 77 Prospect Street. The helmet has a Fireman with trumpet finial. The initials of the firefighter who owned the helmet are missing. This helmet is now in the NJ State Fireman's Museum in Boonton, NJ 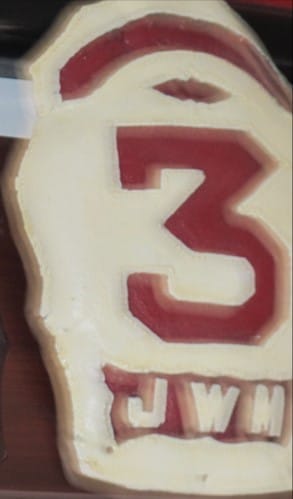 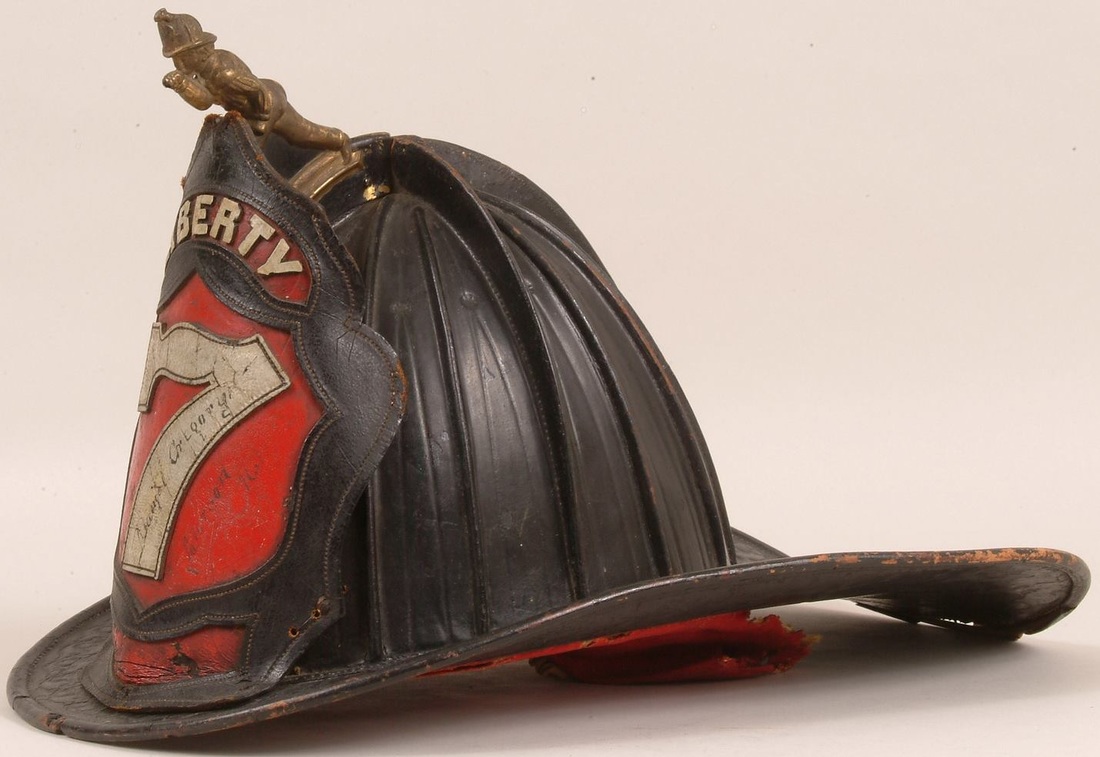 Liberty Engine Company 7 was organized on August 9th, 1871, and went into service in April, 1872. Their first engine was a piano-box engine, formerly used by Engine No. 6. They were first located in a one-story frame building on the lot where their present quarters are situated: 298 Tyler Street (later renamed as 176 Twelfth Avenue).

This leather fire helmet was manufactured by Cairns & Brother of New York, New York in the late 19th century. The 16 comb hat is painted black overall, with ivy vine scroll work stamped around the brim, and a two hoses flanking an inset metal frontpiece on the back of the brim. There is a Fireman with Trumpet Finial. The shield is black leather with a red background and white lettering. The frontpiece reads “LIBERTY 7” in white leather and is signed “Daniel Gregory/Paterson, NJ” in the center. Gregory served as a member of several different Paterson Fire Companies, and was an officer in the Exempt Association of Paterson. 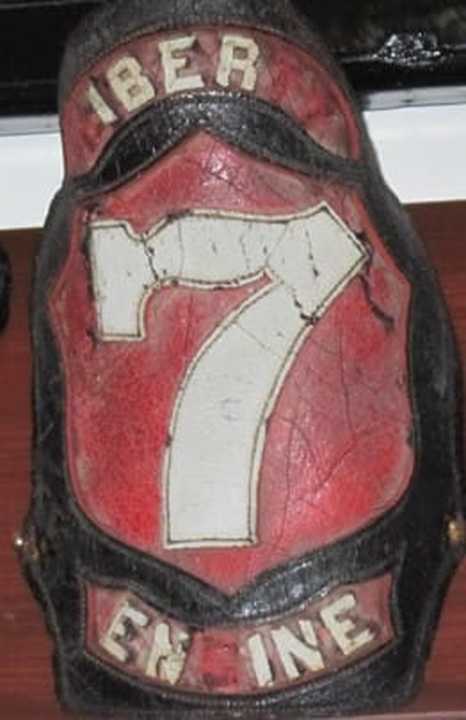 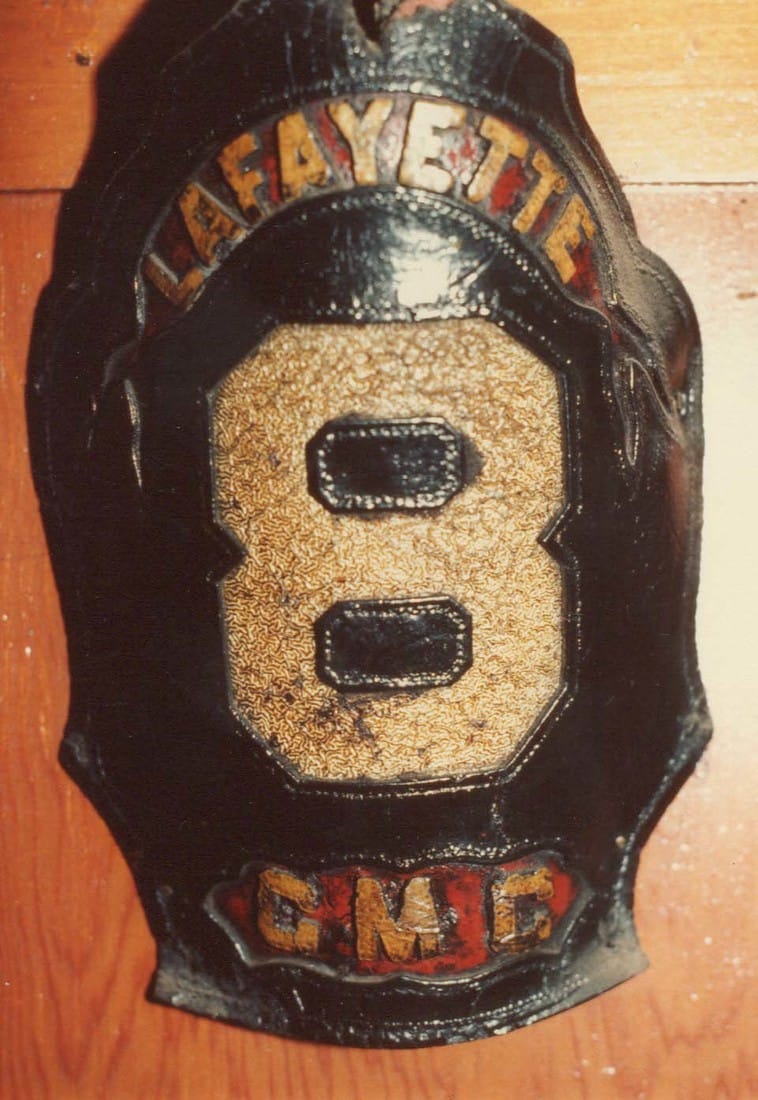 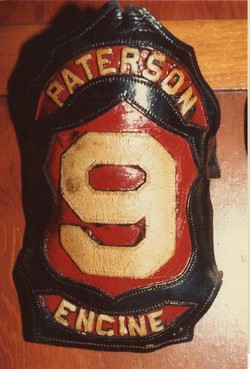 This is a high eagle helmet with brass finial and 8 combs made by well know helmet maker Anderson and Jones of 184 Grand Street in New York City. 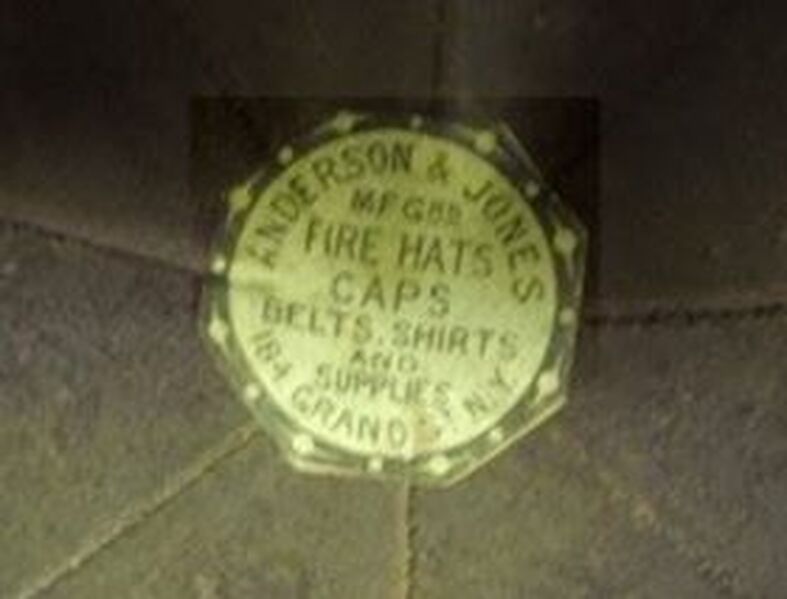 Cataract Hose Company 2, named after the Great Falls was located at Godwin Ave and Auburn Street. The metal shield is characteristic of a helmet used for parades and ceremonies 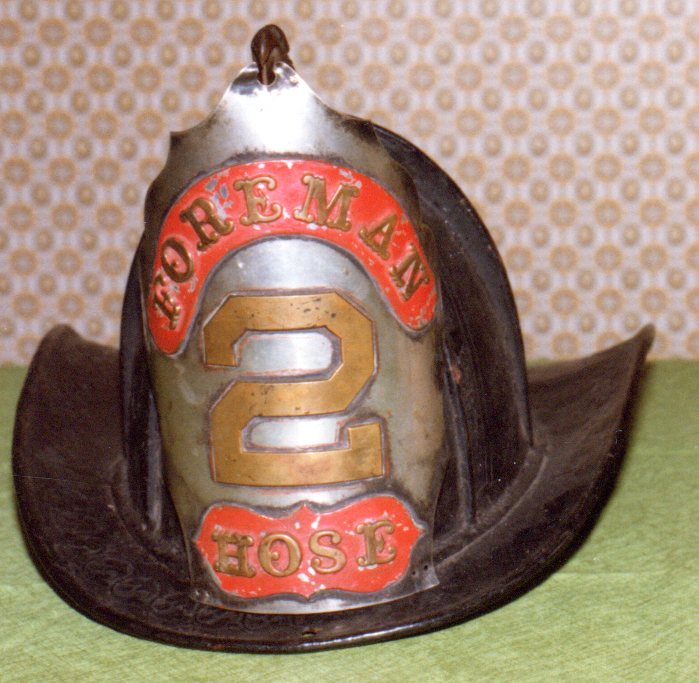 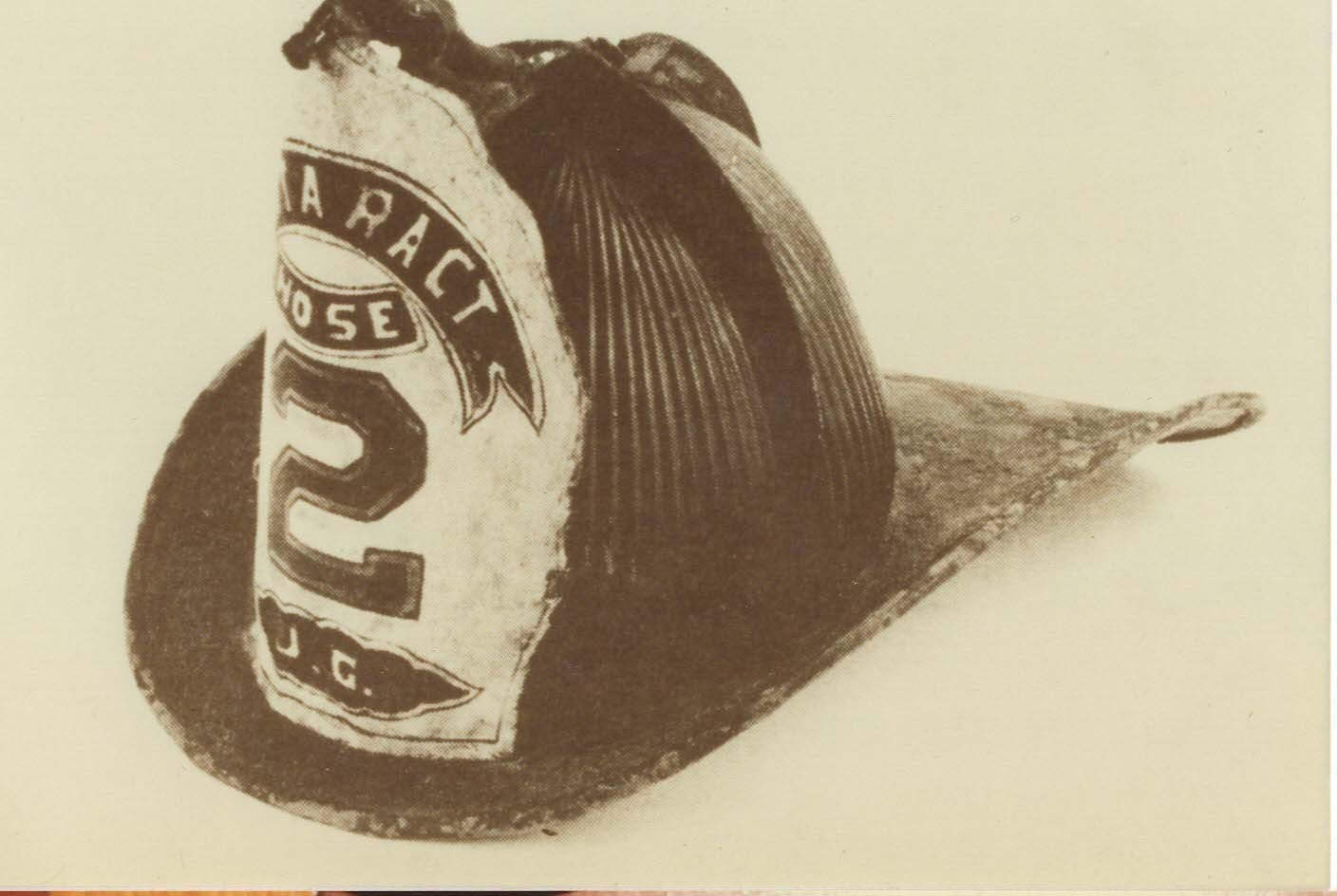 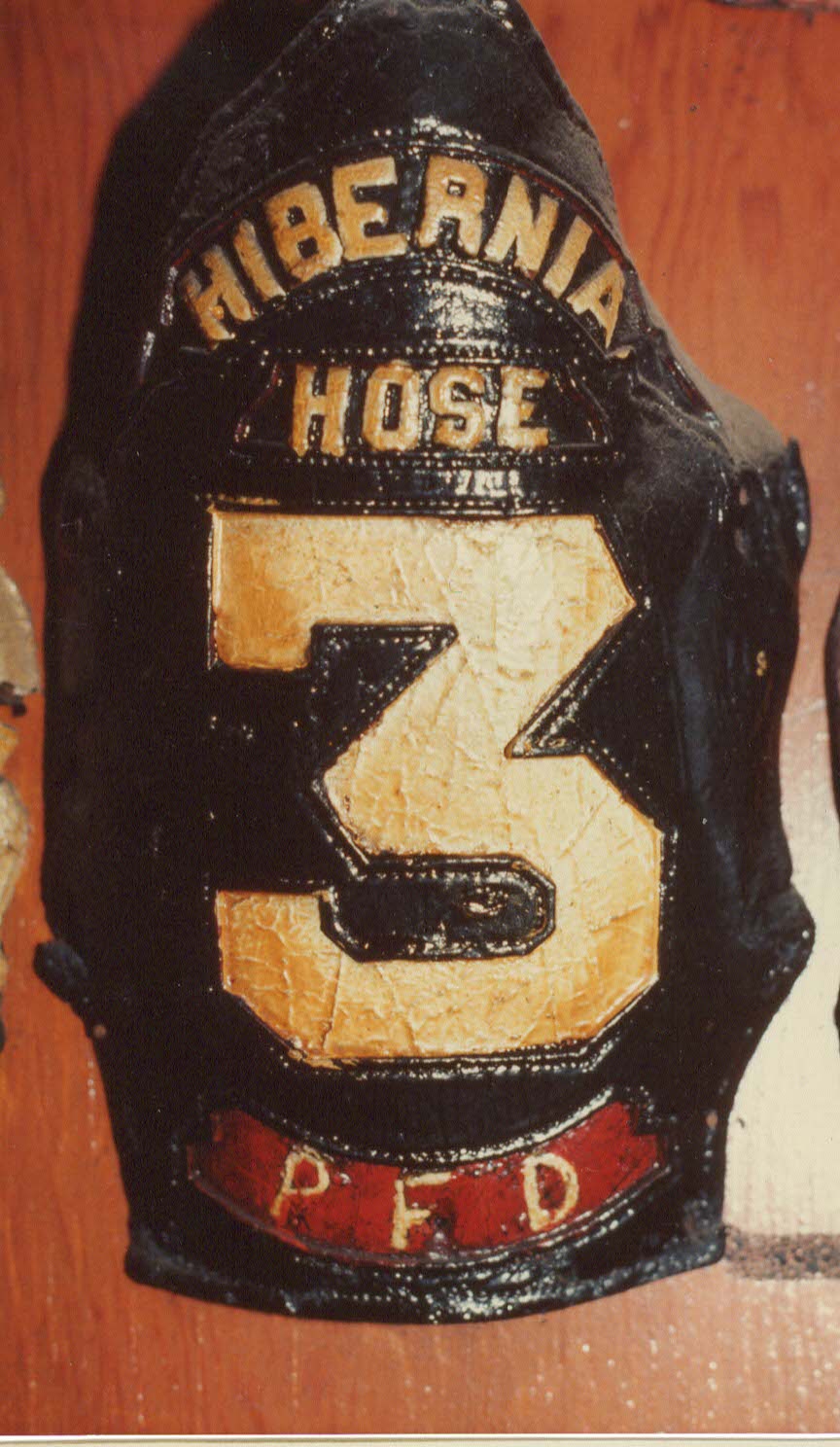 Eagle Hook and Ladder One 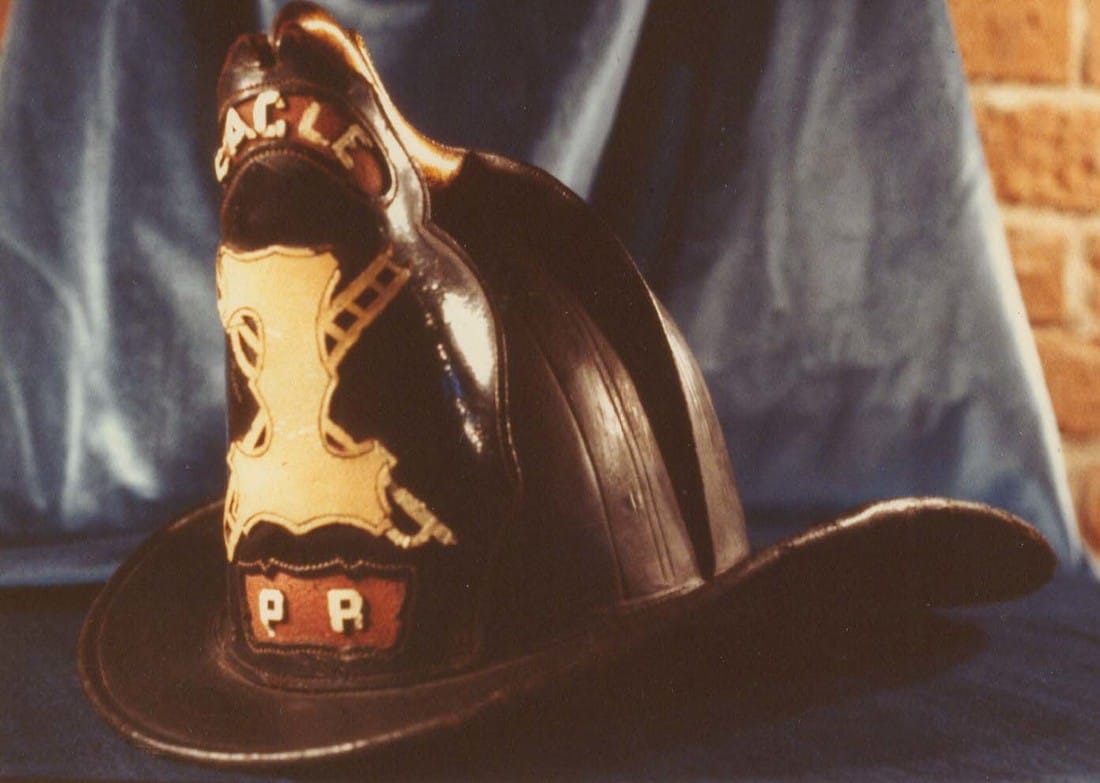 Next two photos show a collection of Volunteer era parade belts, helmet and presentation shields that belonged to the Exempt Firemen of Paterson. The first photo was either at the 23rd Avenue or 17th Avenue firehouse where relics were stored after Exempt Home on Clark Street closed. The second one is their current home, at the Passaic County Historical Society at Lambert Castle on Valley Road, Paterson. 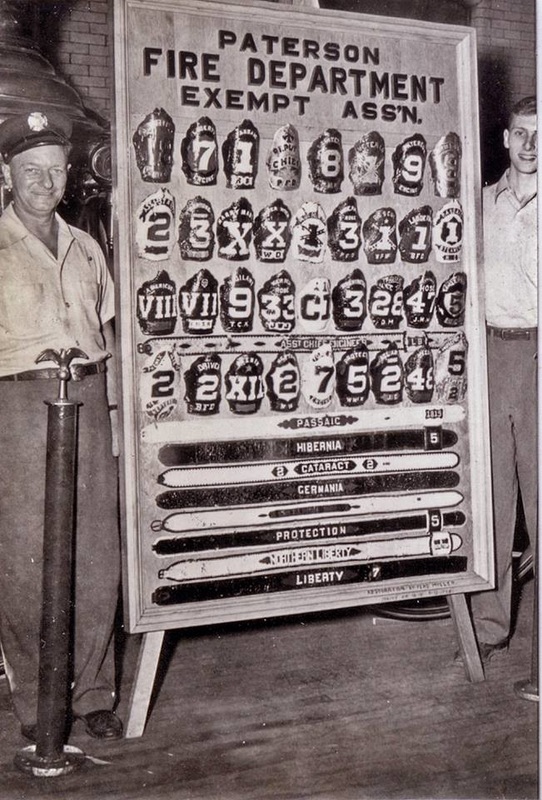 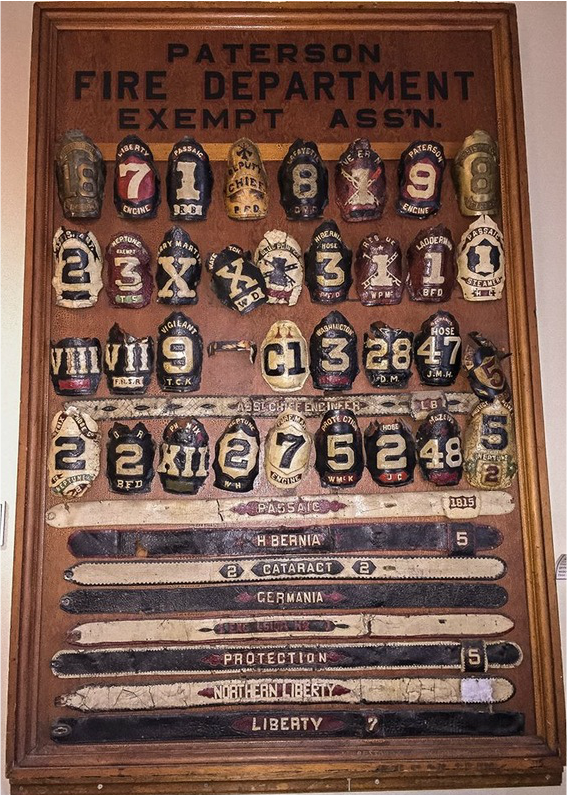 With respect to the photo above of the Paterson Exempt Home Display of memorabilia at Passaic County Historical Society: Most of the shields were on the helmets used by firefighters. The metal shields were used at parades and musters. The larger ones were gifts that companies exchanged at Musters or visits. The belts were worn during parades not during firefighting.