Fire and explosion in a 3-story textile plant killed one man and injured 27 others. The plant, two exposed dwellings, 28 cars and Truck 3 were destroyed. The men of second alarm company Engine Company 5 using deluge set made the cover of the January 1964 Fire Engineering. The official address of the building was 178 Keen Street. Station 656 sounded at 12:33 PM 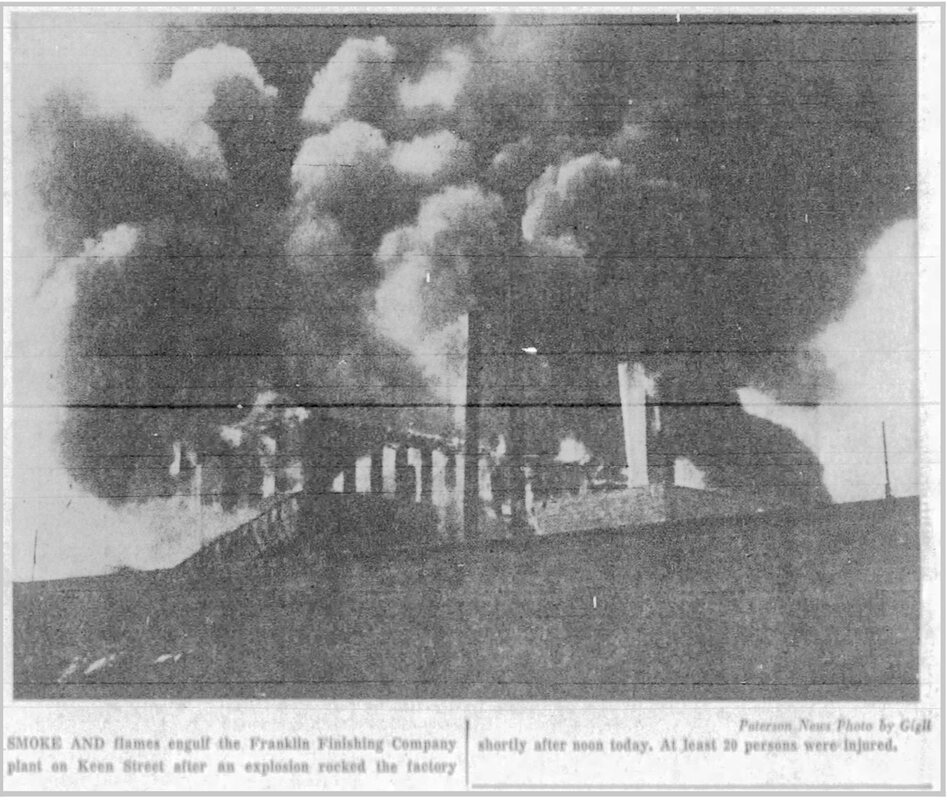 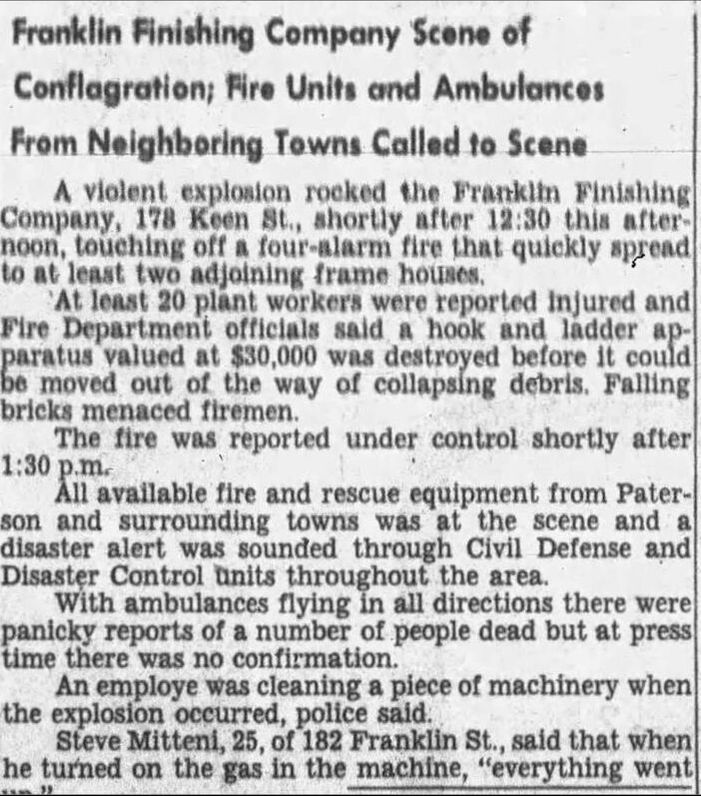 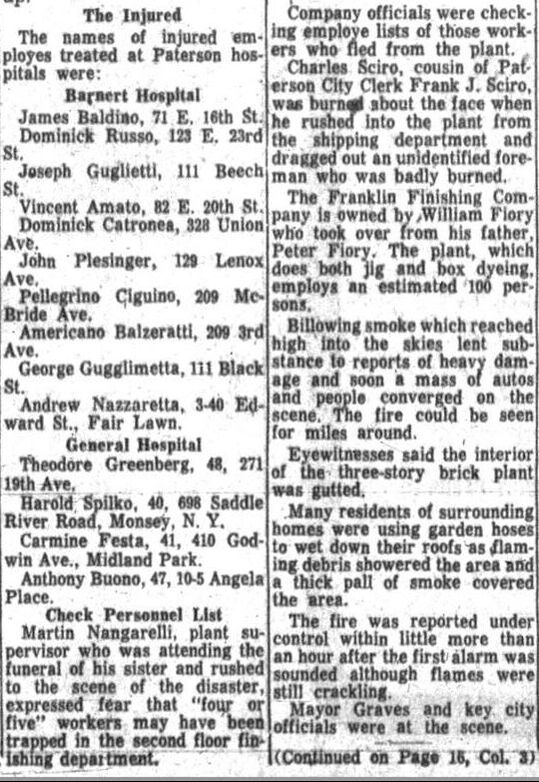 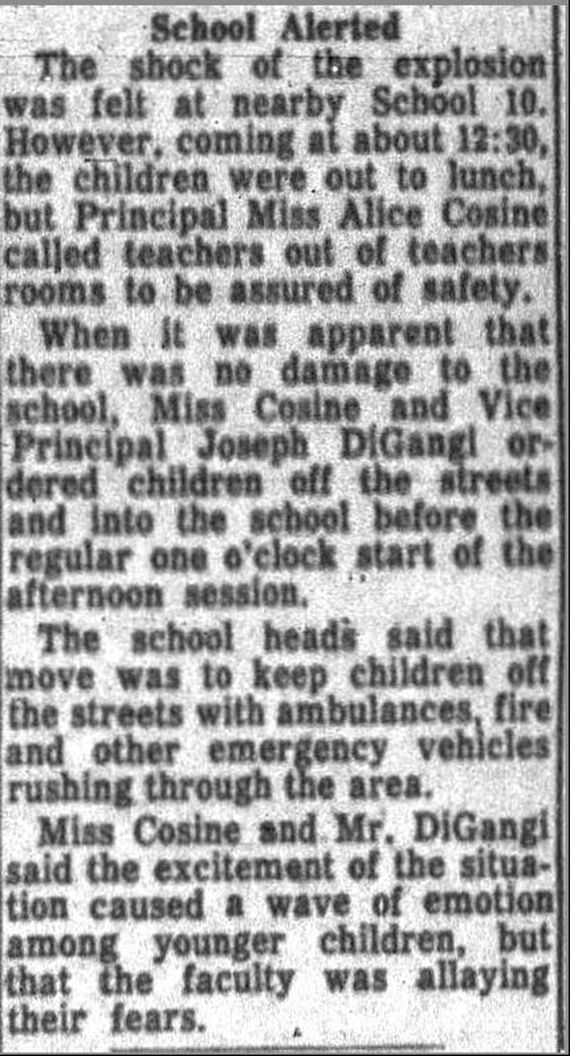 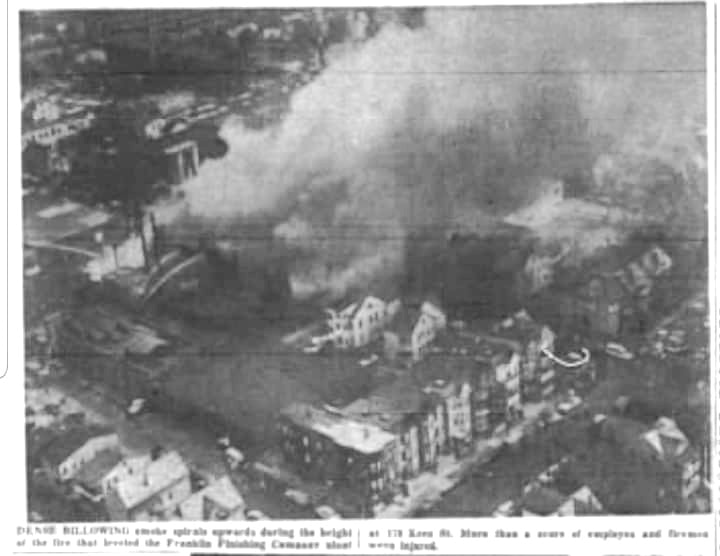 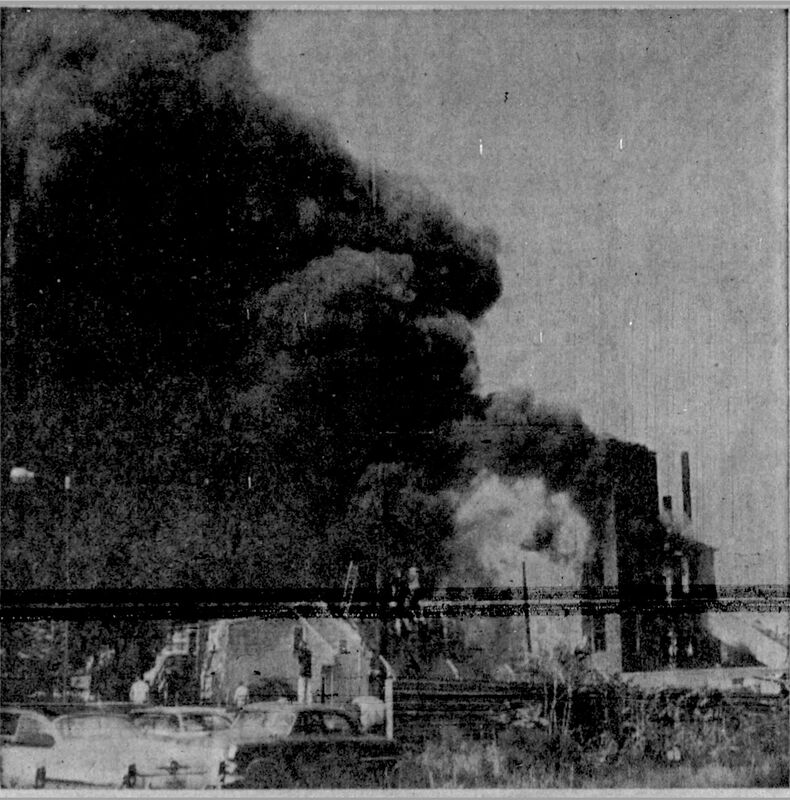 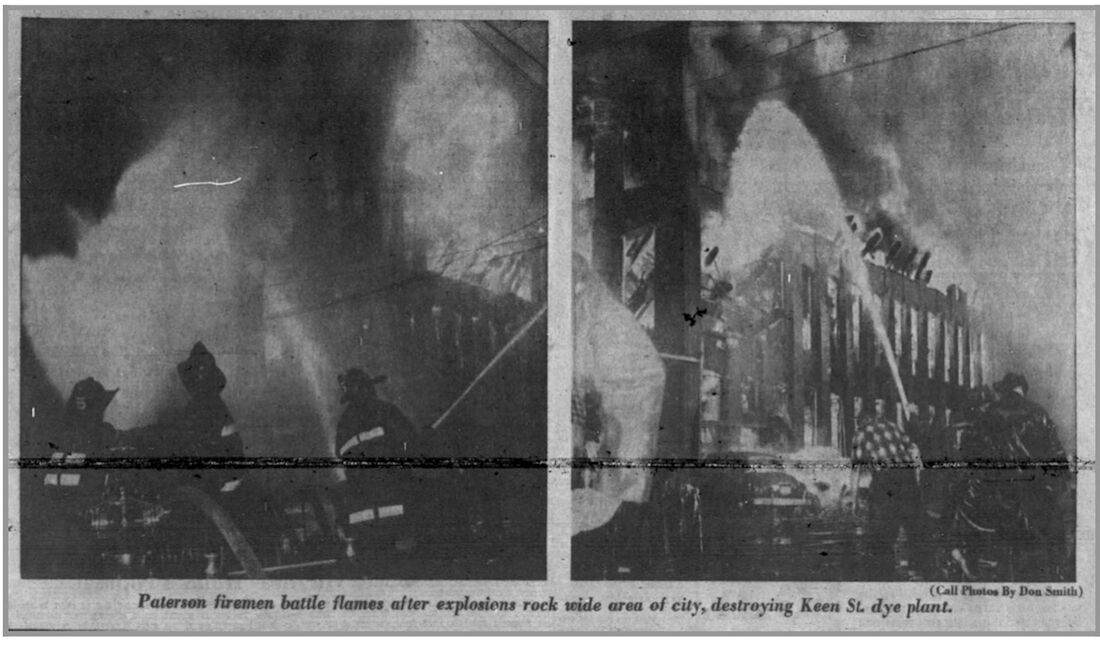 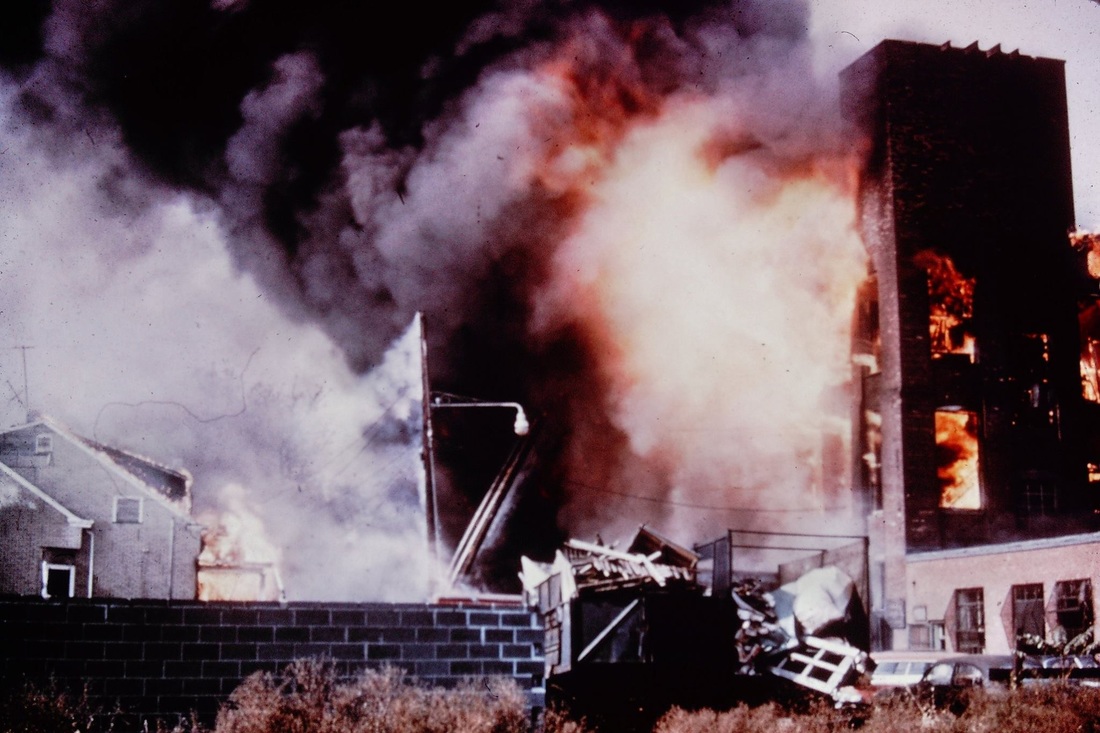 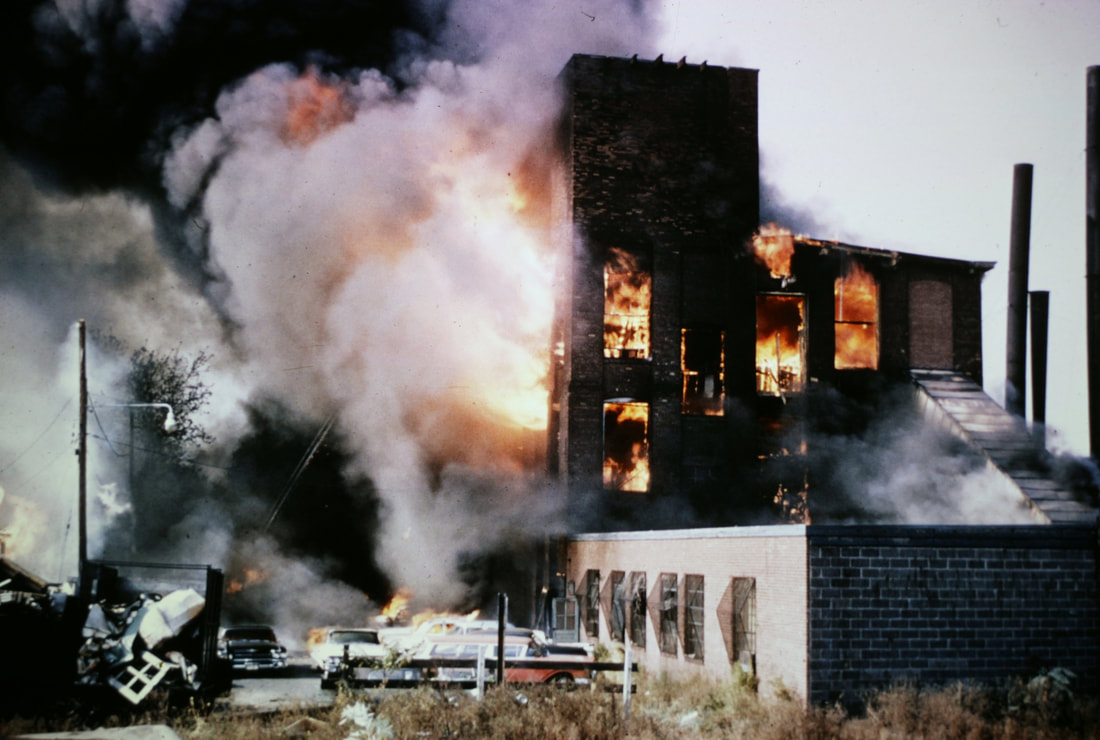 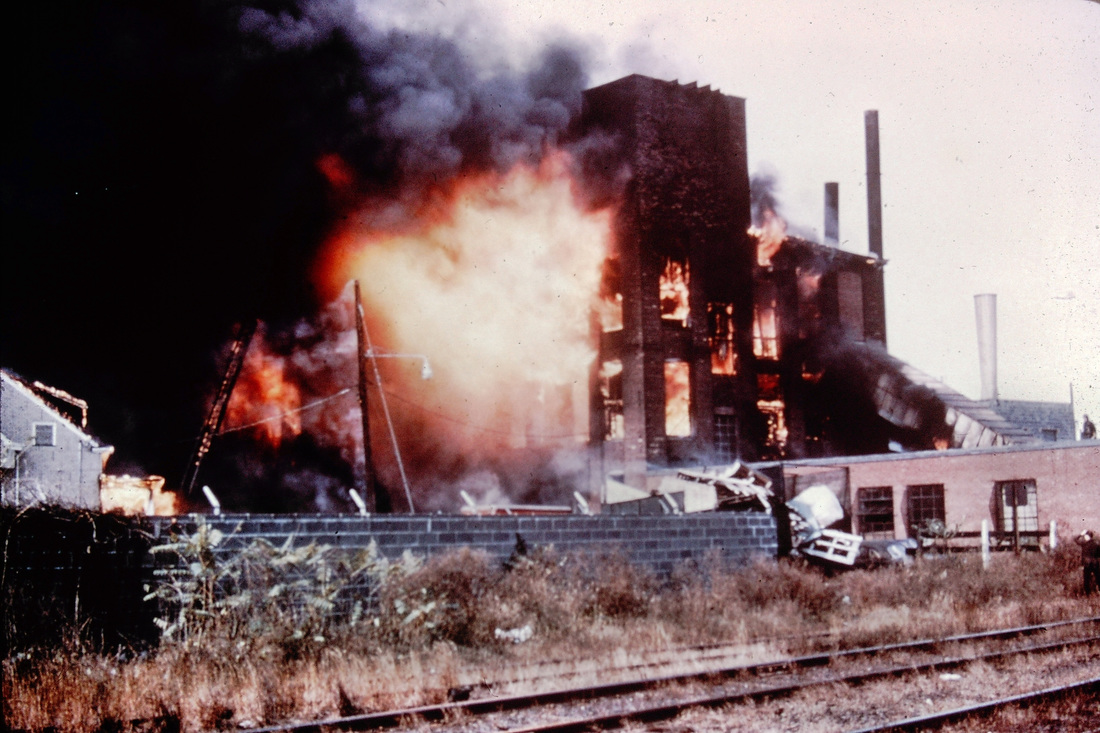 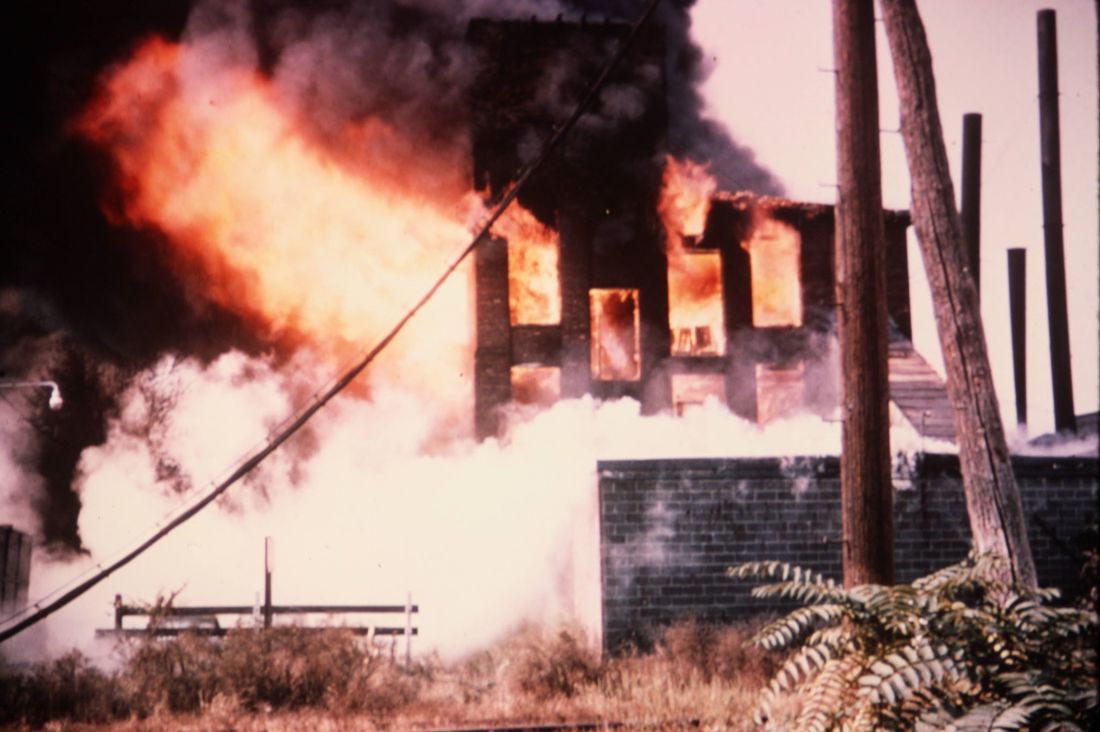 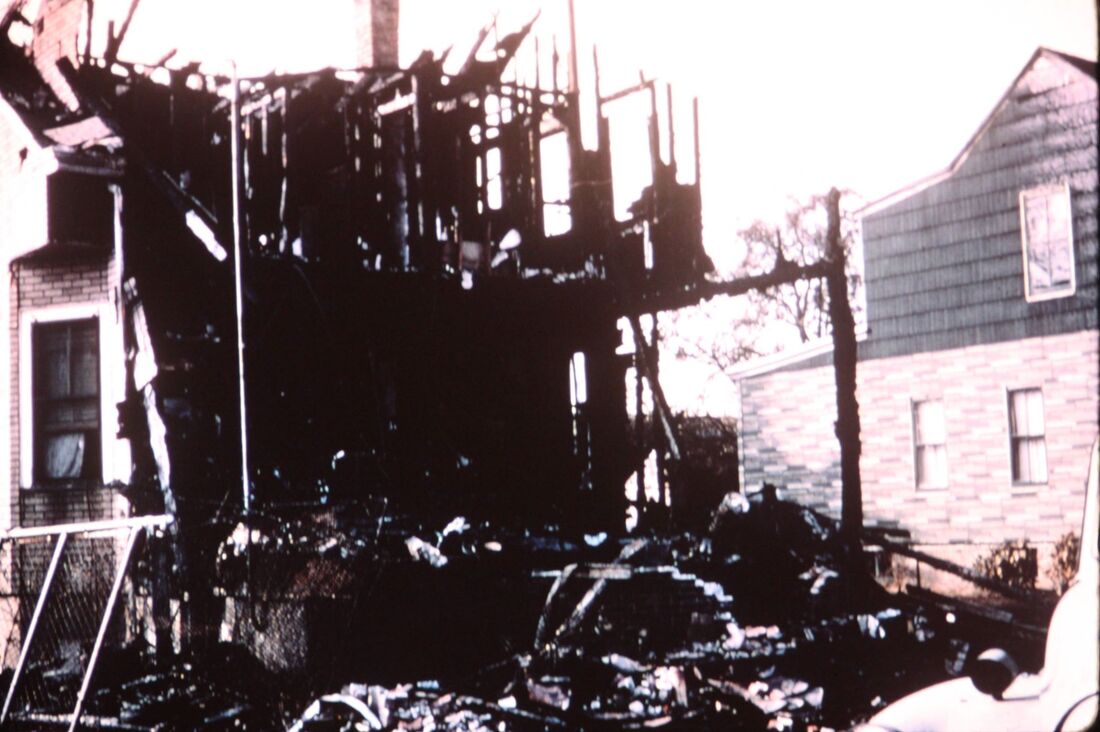 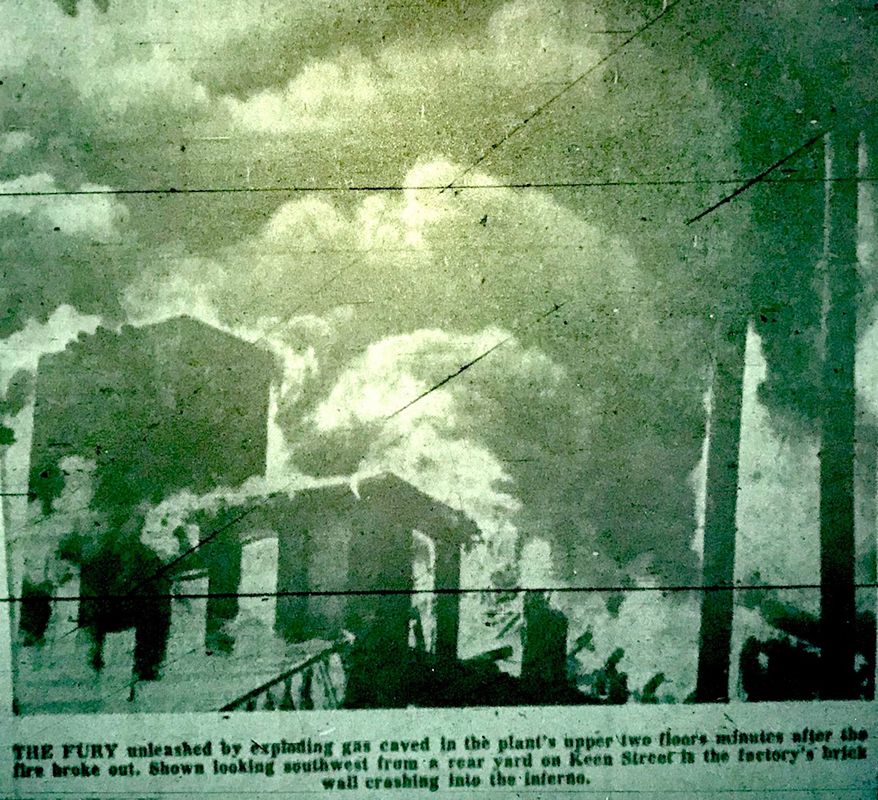 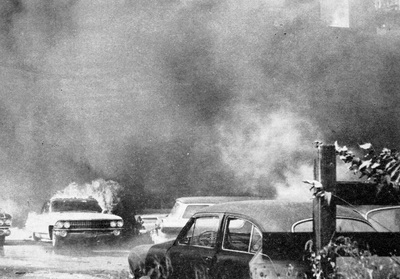 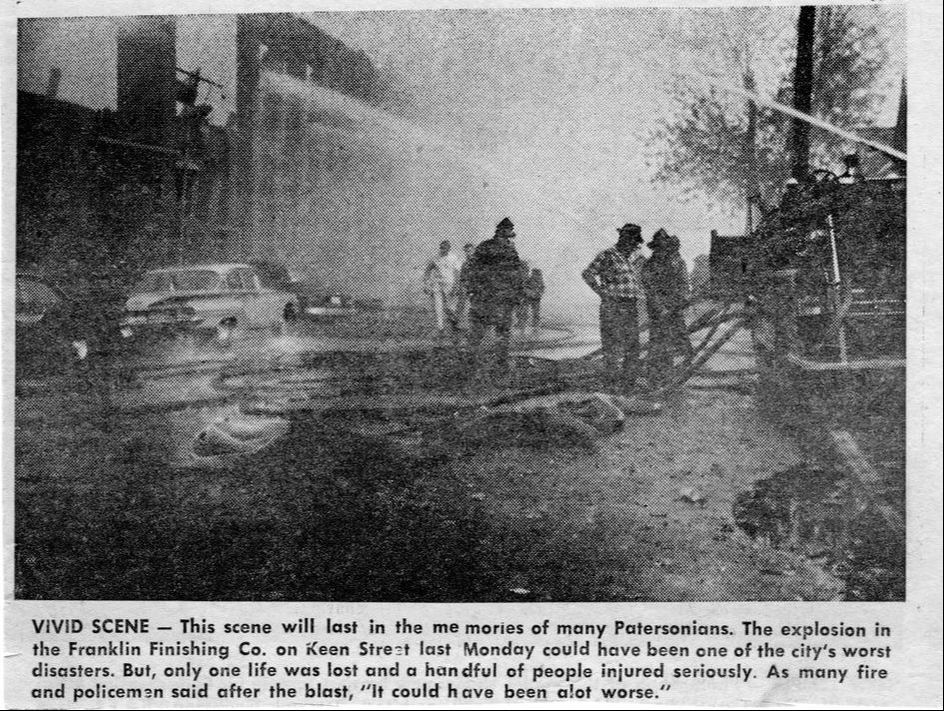 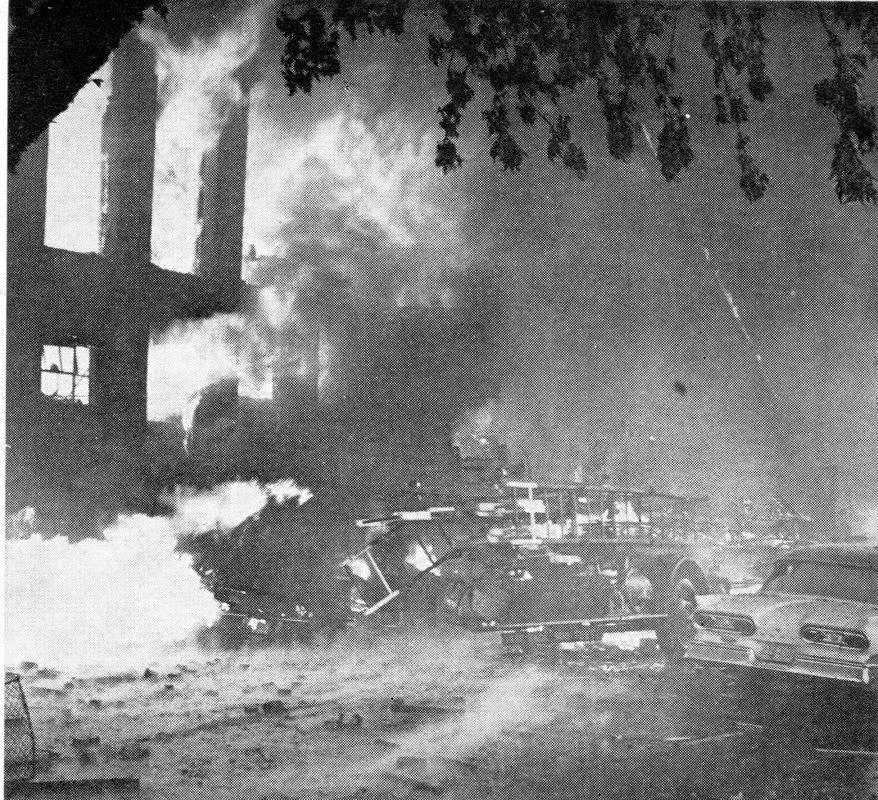 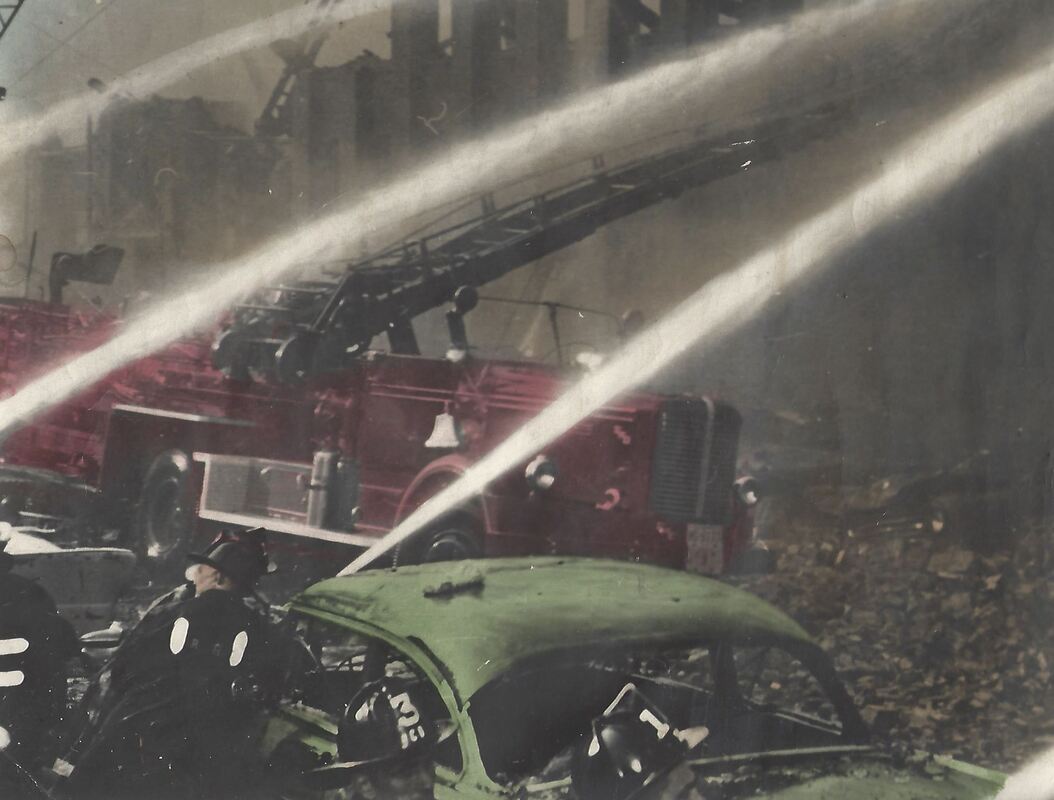 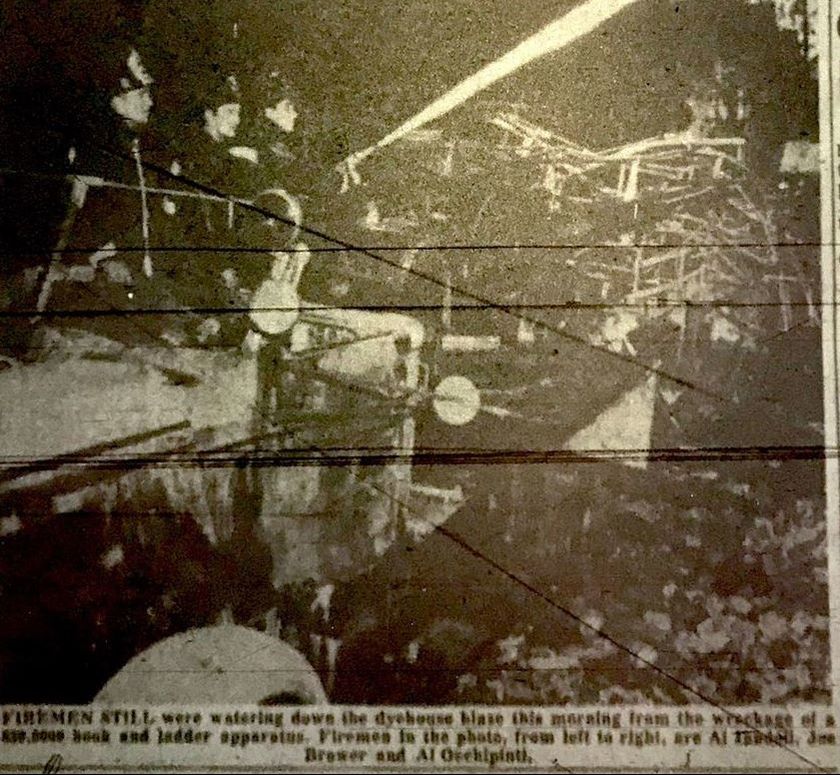 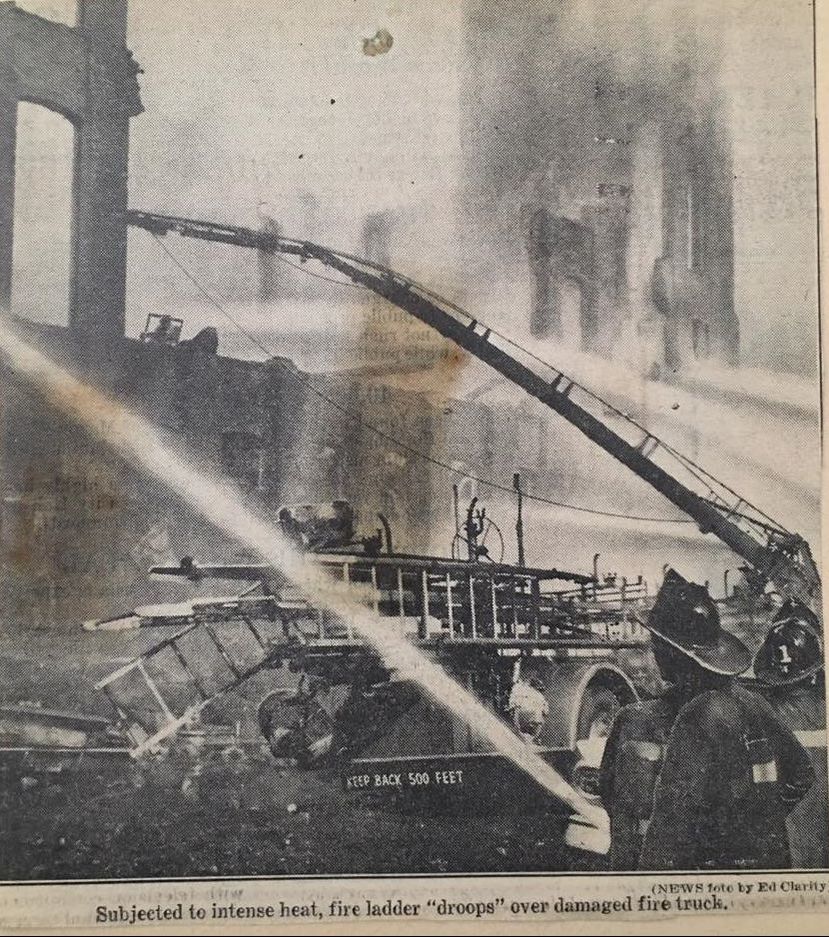 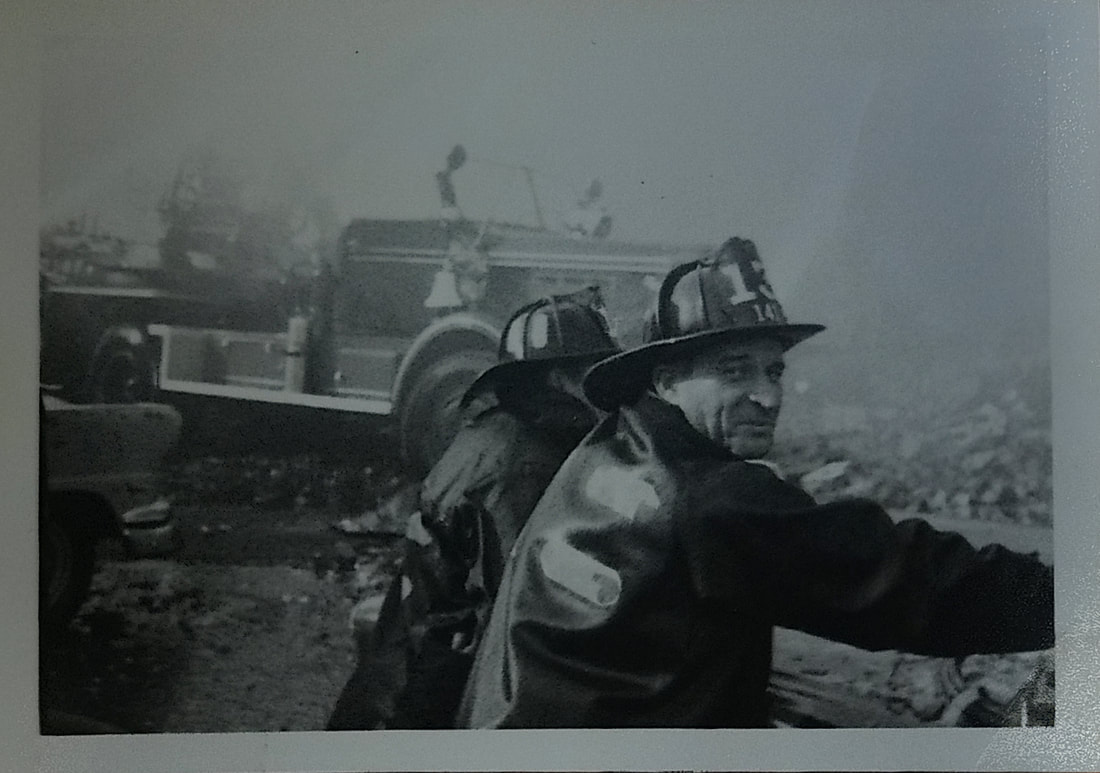 FF Victor LaRegina of Engine 13 with aerial in background - photo courtesy Janet LaRegina
From the Fire Engineering article written by Deputy Chief William Comer: By the time the first alarm assignment of Engine companies 2, 3, 12 and Truck 3 arrived fire had taken over most of the first floor. Deputy Chief Leo Fitzsimmons who arrived with the first alarm units ordered a second alarm before getting out of his gig. Truck 3 had raised its aerial ladder to the third floor and Engine 2 had stretched a line into the first floor. Engine 3 was still hooking up to a hydrant on the same side of  the building (Franklin Street side) but before they had water another explosion rocked the building. Flames shot through the windows like a torch, engulfing the ladder truck and parked cars and licked at the frame dwellings across the street.

Denied the use of their raised aerial ladder, members of Truck 3 raced through the first floor and herded a large group of workers through exits on the other side of the building. The men of Engine Company 2 miraculously escaped serious injury and managed to get out through first-floor windows seconds before still another blast. Caught in the exposed street, the men of Engine Company 3 dropped everything and drove their apparatus through a driveway and into a backyard behind the houses. The other first alarm company (and the only one still operative) Engine 12 had circled the complex of buildings and stretched from Keen Street on the north. 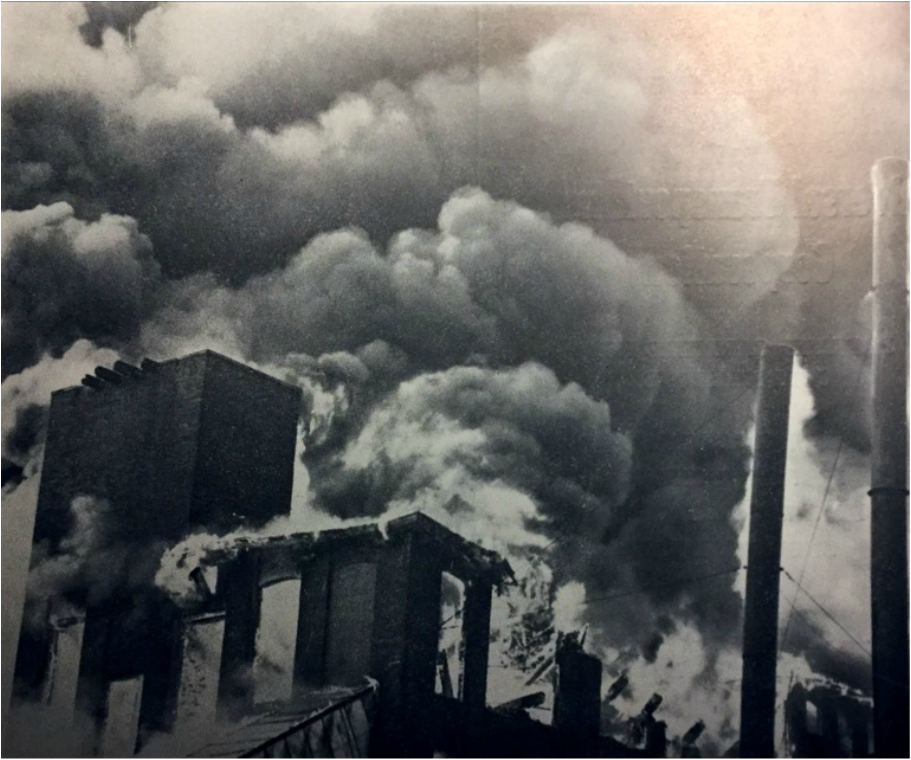 The first due second alarm company was 5 out of Fire Headquarters at 115 Van Houten Street under the command of Captain Charles S Walker. They took a key postion (see cover of Fire Engineering Magazine above) on Franklin Street at the west end of the building. They stretched two lines into their monitor and were sweeping the street with this line to keep the fire from involving the  exposed frame dwellings. They also managed to salvage the hose line which Engine 2 had dropped in their rush to safety by using a hose clamp and then hooking it into their pumper to add to the already heavy stream they had developed. ​
As explosions continued to occur and flames leaped higher and higher, very rapidly 3rd, 4th and then general alarms were sounded and mutual aide summoned. As the additional companies arrived they were thrown into the fight to save the dwellings and parked cars on Franklin Street and then spotted around the perimeter of the fire using heavy streams from hand lines, monitors and thrust pipes. It was a long struggle, since the building had collapsed within itself, creating a densely packed mass of timber,stock furniture and machinery that burned fiercely and to a degree inaccessibly. ​ 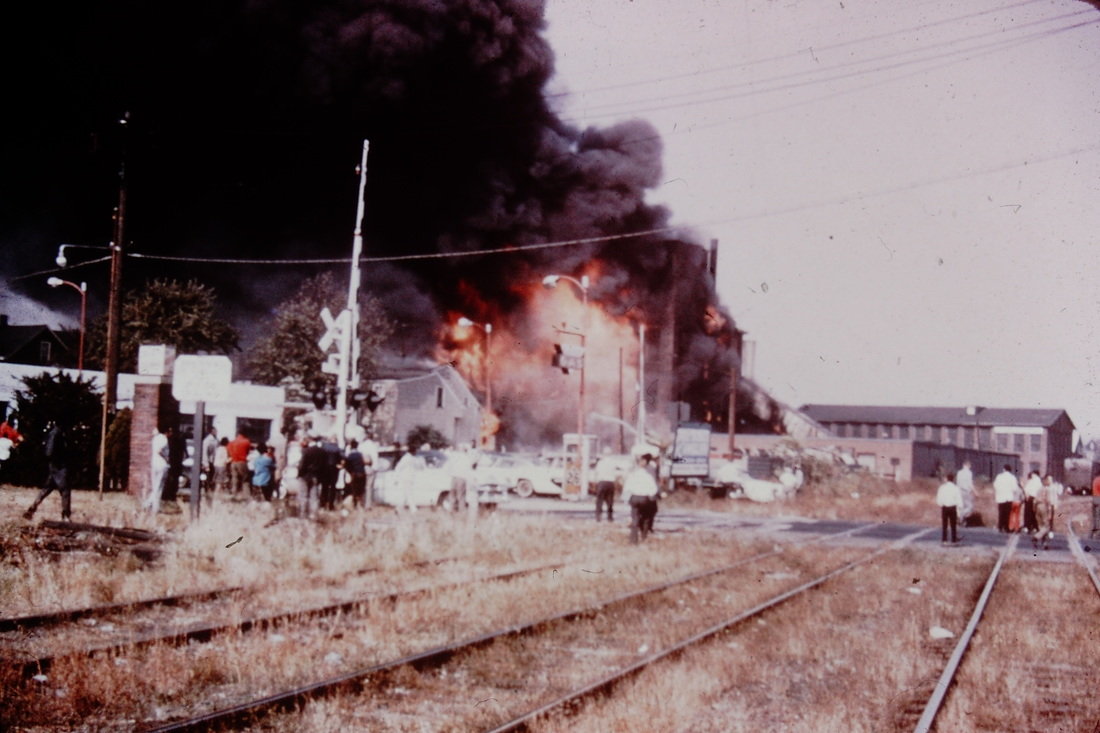 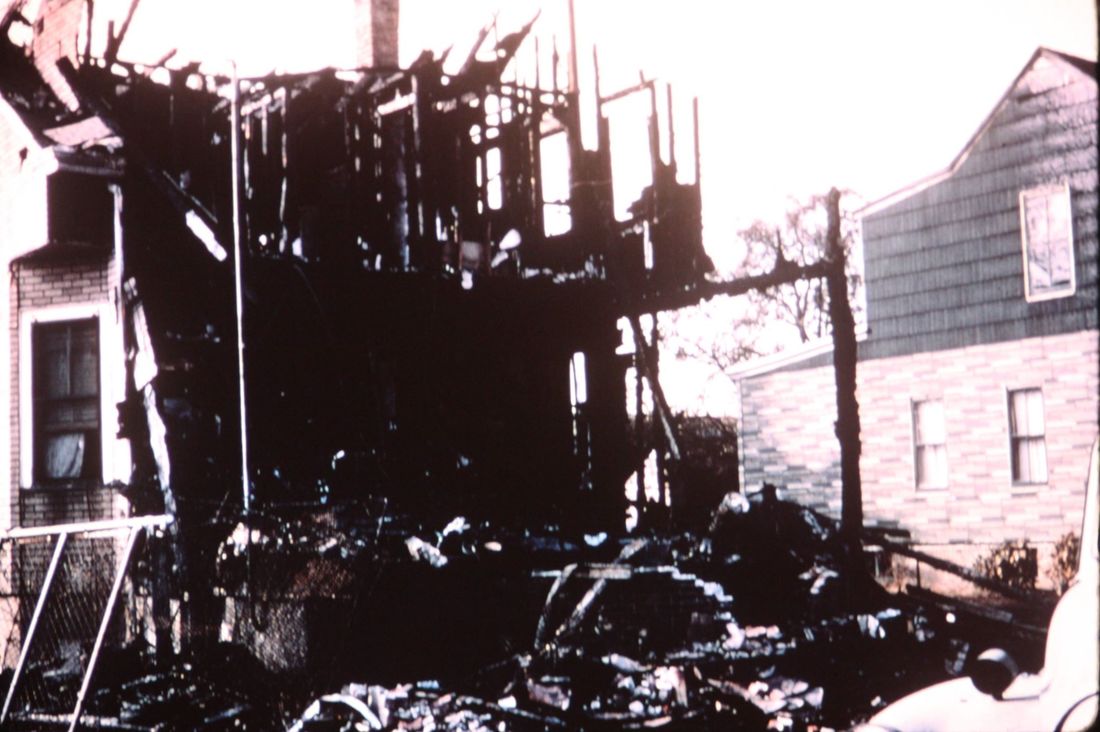 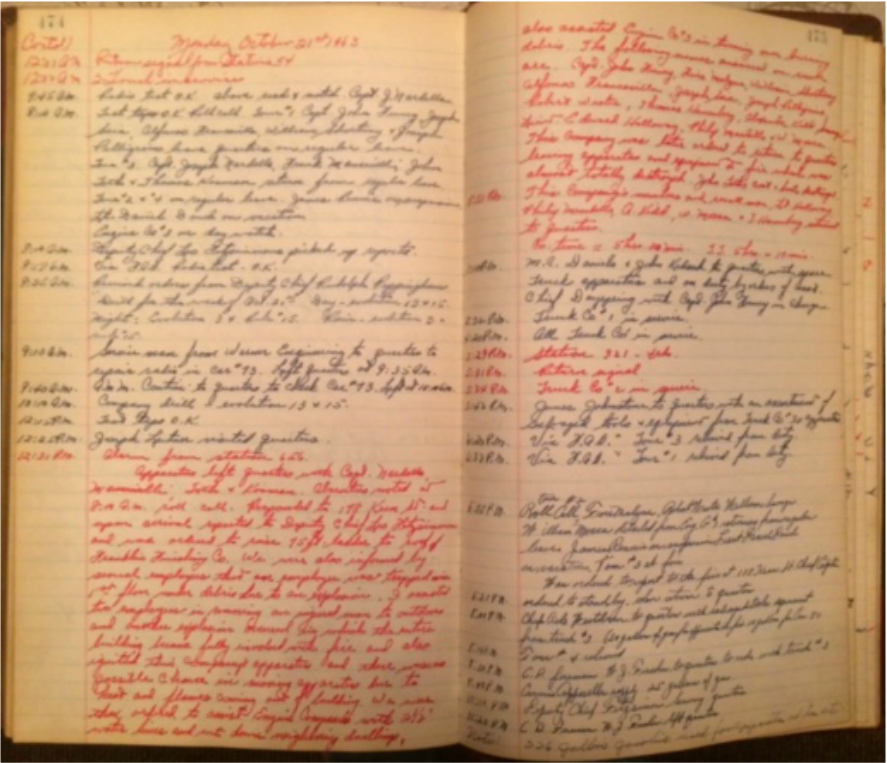 Courtesy of Hancock Collection
8AM Deputy Chief Leo Fitzsimmons picked up reports
8:17 am Fire alarm Radio test OK
8:35 AM: Received orders from Deputy Chief Rudolph Peppinghaus – Drill for the week of October 21st.
9:10 AM Serviceman from Warner Engineering to quarters to repair radio in Car #73. Left quarters at 9:35 AM.
9:40 AM  Master Mechanic Contini to quarters to check Car #73 Left at 10:00 AM
10:00 AM Company Drill and evaluation 13 and 15
12:15 am Test Taps OK
12:25 PM Joseph Leitner visited quarters
​
12:31 PM: Alarm from Station 656. Apparatus left quarters with Captain Nardella, Mancinelli, Toth and Kosman. Absentees noted at 8:00 AM roll call. Responded to 178 Keen St. and upon arrival reported to Deputy Chief Leo Fitzsimmons and was ordered to raise the 75’ ladder to roof of the Franklin Finishing Co. We were also informed by several employees that one employee was trapped on the first floor under debris due to an explosion. I assisted two employees in removing an injured man to outdoors and another explosion occurred in which the entire building fully involved with fire and also ignited this company’s apparatus and there was no possible chance in moving apparatus due to heat and flames coming out of building. We were then ordered to assist Engine Companies with 2 1/2” water lines and wet down neighboring dwellings, also assisted Engine Co. #3 in turning over burning debris.

This company was later ordered to return to quarters leaving apparatus and equipment at fire which was almost totally destroyed. John Toth’s coat and boots destroyed. This company’s members and recall men, Lt. Holloway, Philip Mendillo, A. Kidd, W Mosca and T Hanneberg returned to quarters. Co. Time = 5 hrs. 20 min.
​
1:40 PM  MC Daniels & John Kedash to quarters with spare truck apparatus and on duty orders of Assistant Chief Dayspring with Captain John Feeney in charge
2:32 PM Truck Company 1 in service
4:20 PM All Truck Cos’ in service
5:29 PM Station 321
5:31 PM Return signal
5:34 PM Truck Co# 2 in service
5:42 PM James Johnstone to quarters with an assortment of salvaged tools and equipment from Truck Co’ 3 apparatus
6:20 PM via FAO “Tour 3” relieved from duty
6:33 PM vis FAO “Tour 1” relieved from duty
​
Photo of what the destroyed aerial looked like - it is in the foreground (a 1956 photo) 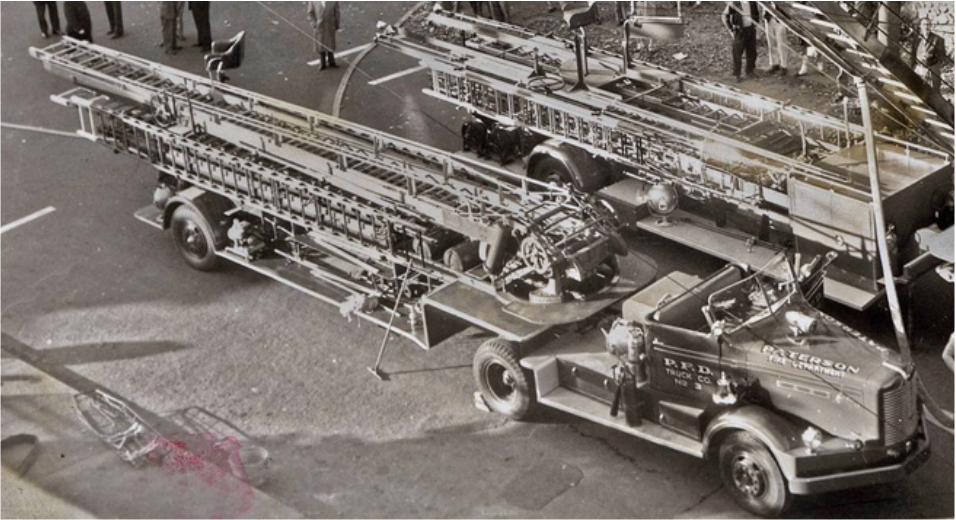 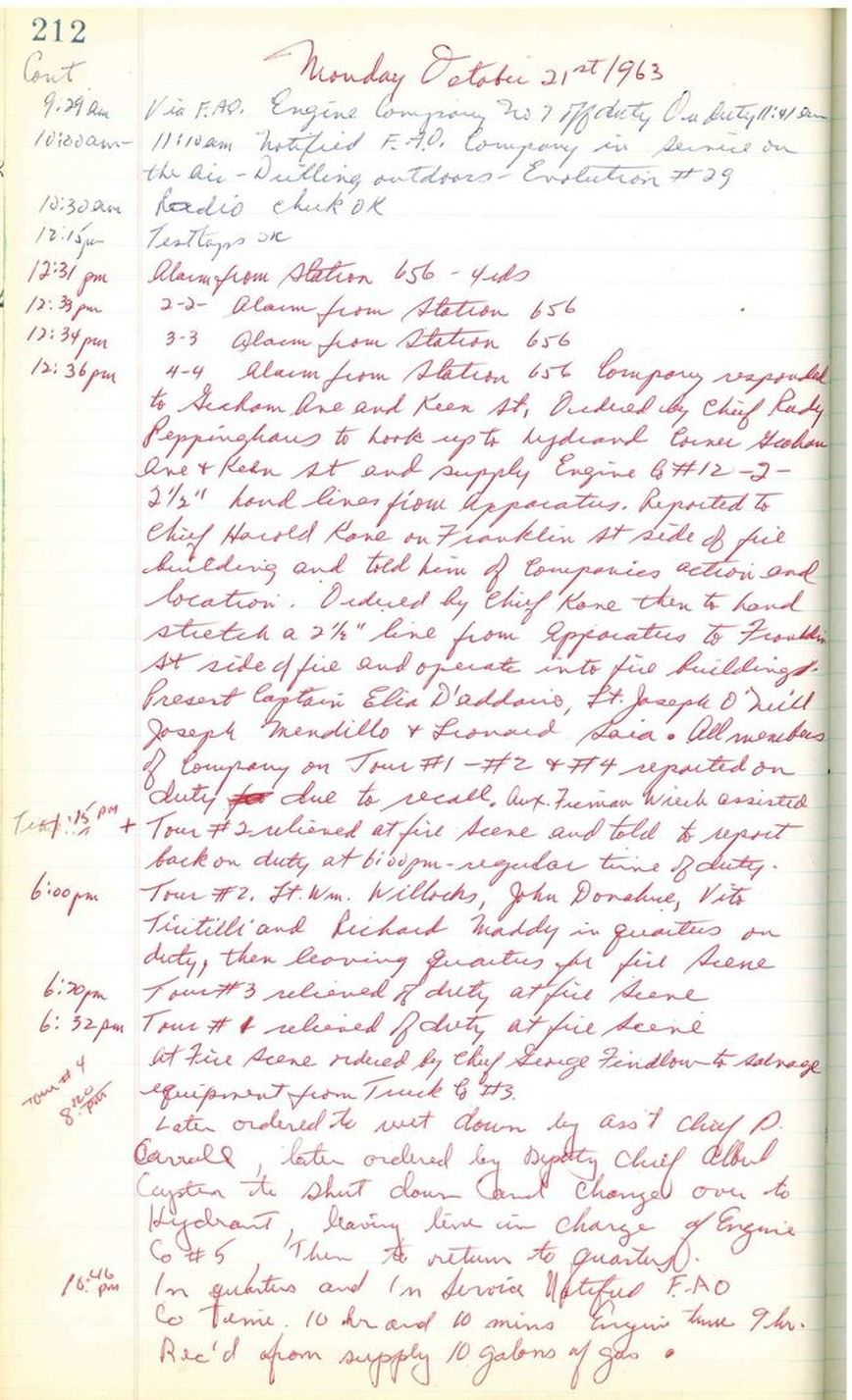 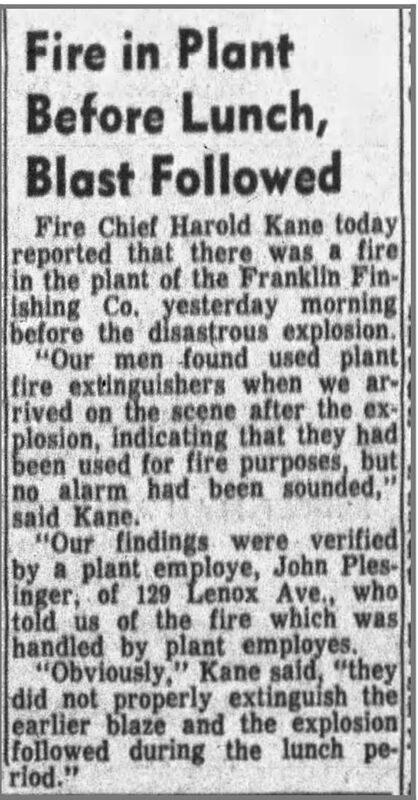 January 9, 1964:  Article re the fire written by D/C Comer is published in Fire Engineering 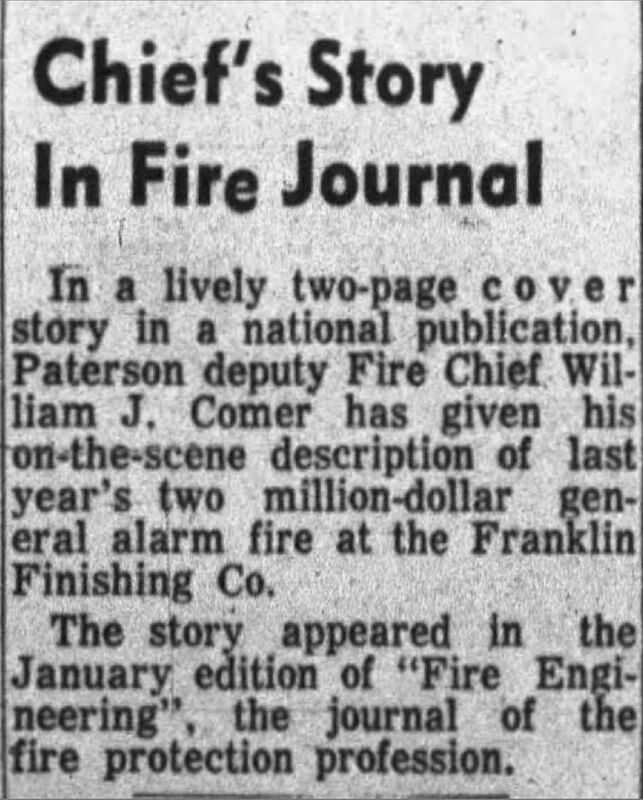 Paterson Evening News courtesy Dennis Morrison
​Verbal history: (via e-mail to web site) My Grandparents owned one of the two houses totally destroyed in this fire. It was an incredible tragedy for our family. A house my Mom grew up in, the factory was across the street. I remember looking in those bottom floor windows as a child..seeing the huge rolls of silk going through the machines, the noise of the motors and the incredible "smell" of the silk dyeing process. All still very vivid for me even now as a 66 year old (my Mom is 92!) My frail Grandmother had to be taken out of there over back fences as there was no way to get out. It was a dead-end street. Then next day my Grandmother died of a heart attack from all the unbearable stress. It was truly a very hard time for my family, losing their home and then her too. So to see the photos of that inferno again just made me gasp.