February 4, 2021:  Snow storm aftermath at  E24 Street and Park Ave -   Todd Hollritt photos
February 22, 2021: @1534 Hrs.  Incident # 21-1291 Working fire, 264 E. 22nd. St. 2 story wood frame occupied dwelling with fire on the second floor. Primary and secondary searches proved negative. Battalion 2 remained in command as the fire was placed under control shortly after TC arrival. Due to the damage caused by the fire and post overhaul operations, the utilities were cut to the structure and the owner and occupants relocated with the assistance of Paterson Police. A firefighter injured (fracture) his foot during vertical ventilation from the aerial device.
February 27, 2021:  @0210Hrs   Incident # 21-1411  30-32 North 7th Street 3rd alarm fire in a 2 story Ordinary Construction OMD. Heavy fire conditions on arrival on the second floor threatening the Delta exposure, 26-28 North 7th Street of similar construction. Primary and secondary searches of 30-32 North 7th Street were incomplete due to the extreme fire conditions and instability of the structure. Primary and secondary searches of 26-28 North 7th Street proved negative. Offensive attack was initiated. Conditions rapidly deteriorated which lead to a defensive operation on the building of origin.  Companies entered the Delta Exposure and extinguished a minor fire condition on the second floor. Multiple exterior hand lines and an elevated master stream operated on the structure to contain the fire. Companies rotated through rehab.  A PFD Captain suffered a second degree burn on his neck. He was transported to St. Joseph's Hospital Paterson for an initial assessment and treatment then transported by Ambulance 95 to St. Barnabas Burn Center for advanced treatment and care.
For more BTF Photos CLICK HERE 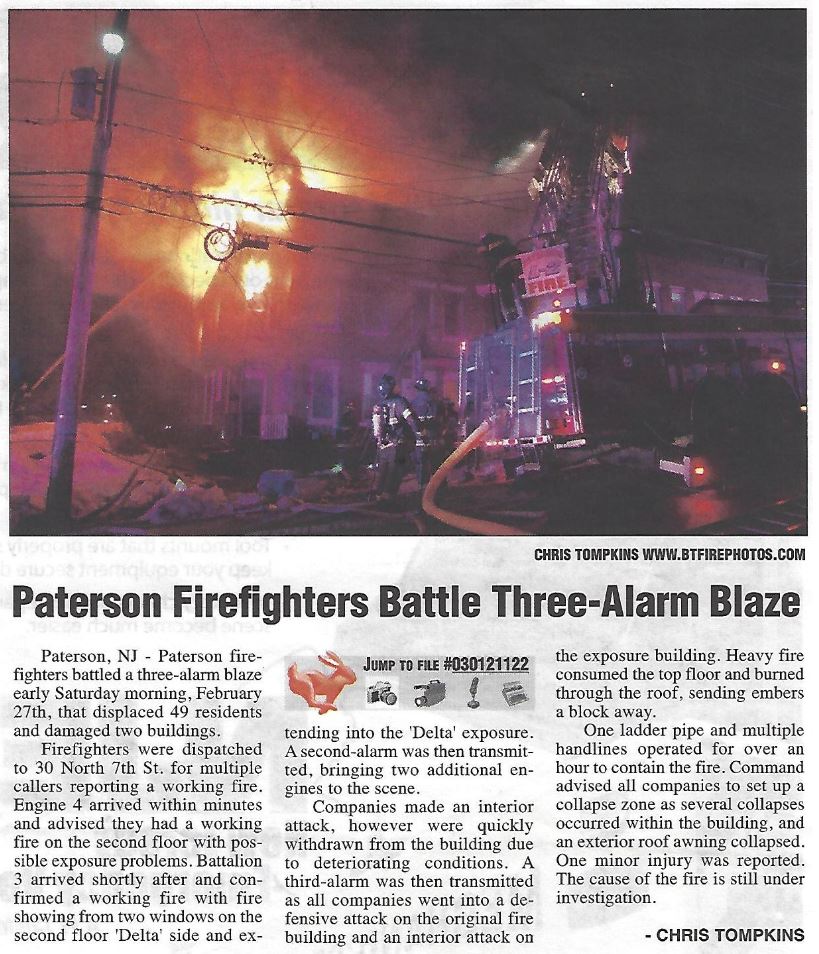 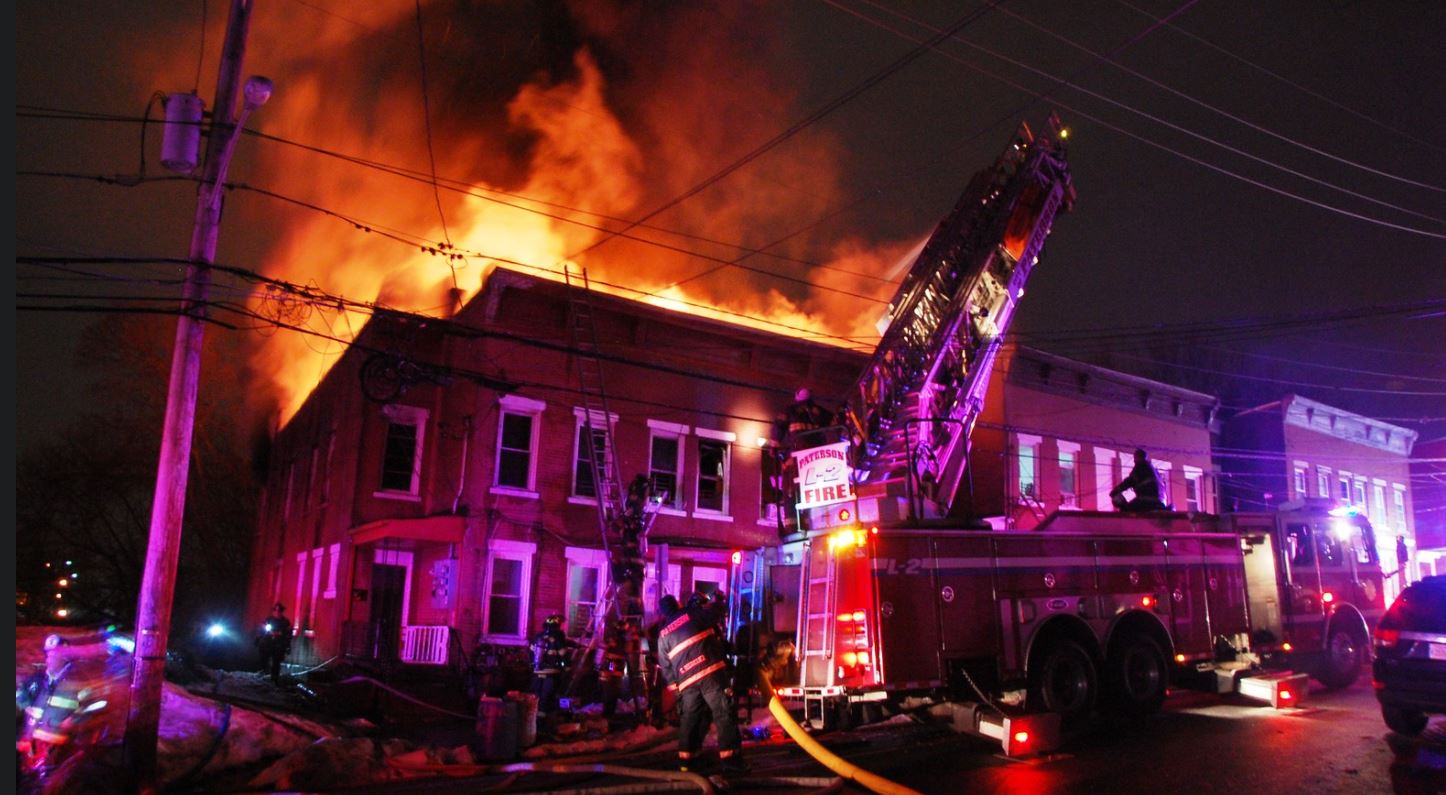 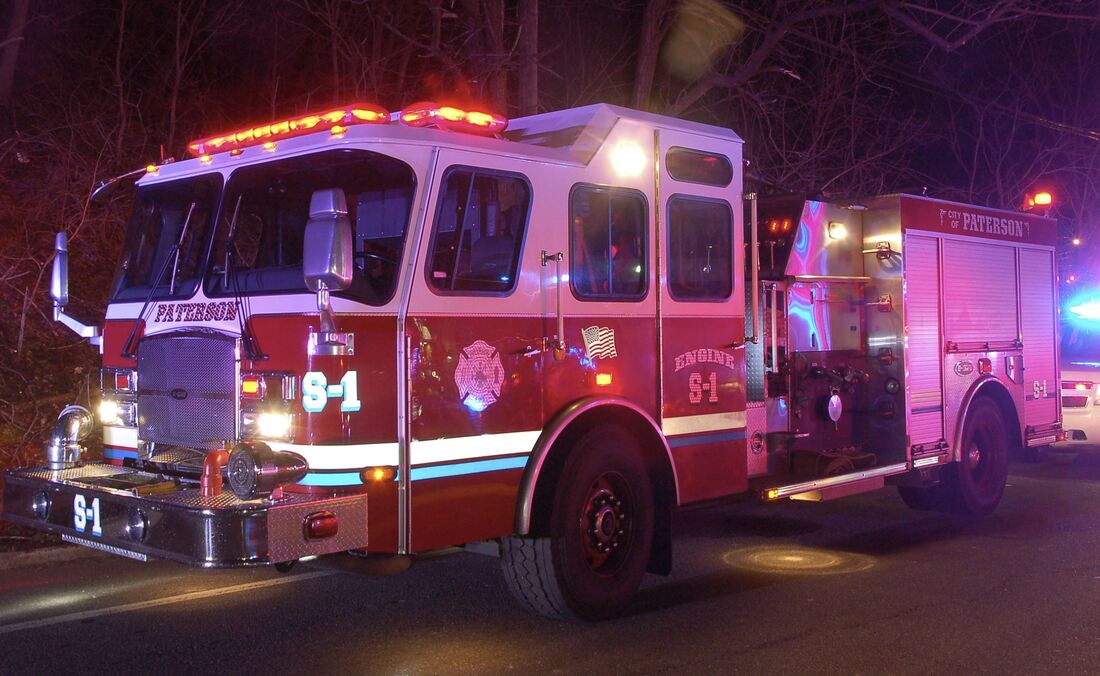 March 5, 2021:  10 Green Street 2nd alarm  @2122 Hrs. Incident # 21-1576 8 Green Street. 2nd Alarm Fire, 2 ½ wood frame with exposure B of similar construction. Heavy fire on 2nd and 3rd floor of both structures, all tenants evacuated and relocated by Red cross through police (14 Adults and 8 children). A small dog was rescued and no injuries.
For BTF Photos CLICK HERE 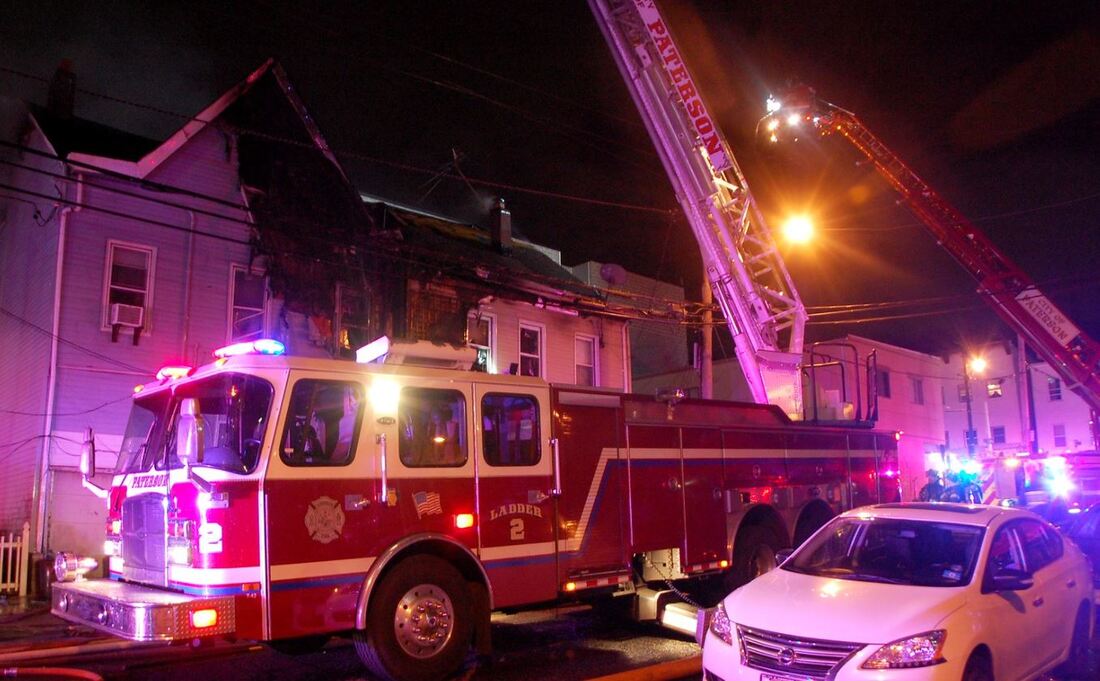 Chris Tompkins photo
March 7, 2021:  @1003 Hrs- Incident # 21-1603- Tour 2 - Working Fire at 349 Fair Street, a three story, Type 3, Ordinary Construction apartment building housing twelve apartments. On arrival heavy fire was venting from the second floor windows on the 'A' side, auto exposing and extending into the third floor. A second alarm was transmitted. An aggressive interior attack was implemented. Four 1.75" lines were stretched to the fire floor and the floor above. A primary search was initiated on the fire building and the 'B' and 'D' exposures were evacuated. Rescue 2 split their company. The Captain and one FF opened the bulkhead door via the interior stairs. FF Santore and FF Hirschmanner went to the rear of the building and found an adult male and his approximately three year old daughter on the second floor rear fire escape. The father was holding his daughter over the railing about to drop her to the FF's below. FF Santore and FF Hirschmanner calmed the father down and prevented him from dropping his daughter. They then quickly ascended the fire escape and rescued the daughter and her father who were then transported to SJHMC for evaluation. Ladder 2 opened the roof to check for extension into the cockloft. There was no fire extension, just heavy smoke. Primary and secondary searches were negative. A third alarm was transmitted for additional manpower. The fire was placed under control at 1137. Companies remained on the scene for extensive overhaul operations.
March 7, 2021:    Incident #21-1609- Working Fire at 16 Barnert Place, a 2.5 story, Type 5 OMD. There was a heavy fire condition on arrival in the rear of the building that extended into the 'D' exposure (#14). A second alarm was transmitted. There were exposure problems on the 'B' (#16) and 'D1' (#12) sides, which were of similar height and construction separated by two feet. Offensive operations were implemented in all four structures. Searches were negative; the buildings were evacuated. A third alarm was transmitted, and companies were pulled out of #16 and #14 to switch to defensive operations. Multiple 2.5" lines, a deck gun and three ladder pipes were put into operation. A fourth alarm was transmitted, and companies transitioned back to offensive operations. Multiple PAR were conducted; all personnel were accounted for. All companies were rotated through REHAB. CFI-1 18 Barnert Place sustained minor damage. 12 Barnert Place sustained water damage.
for BTF Photos CLICK HERE 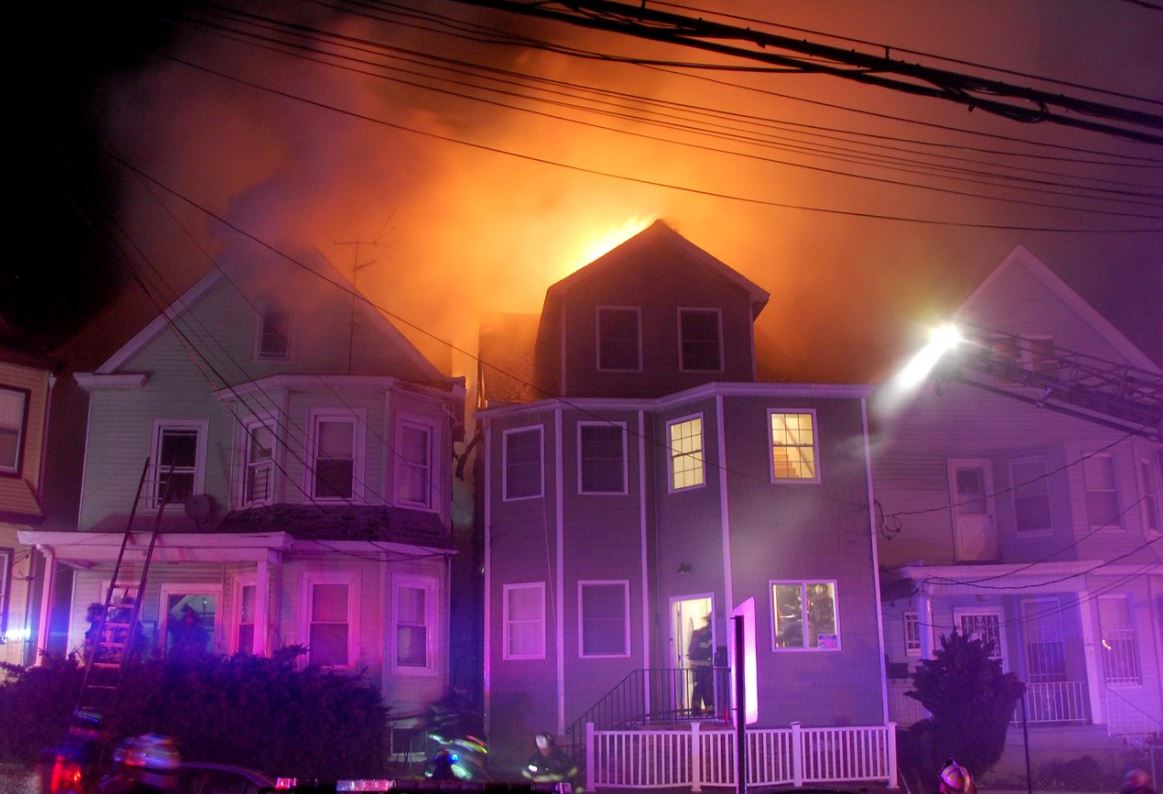 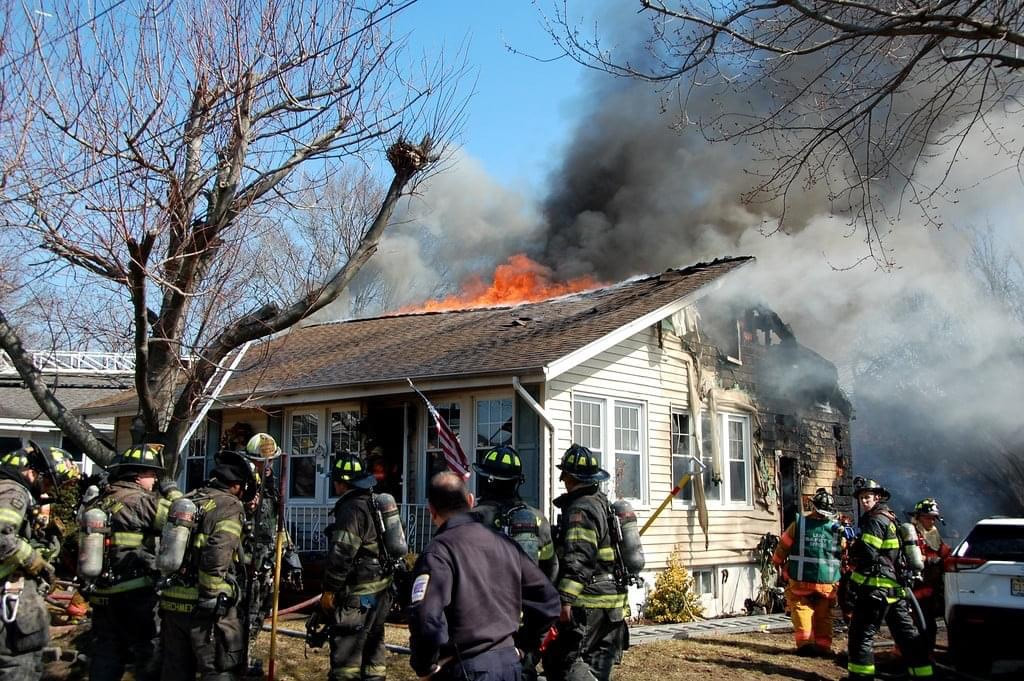 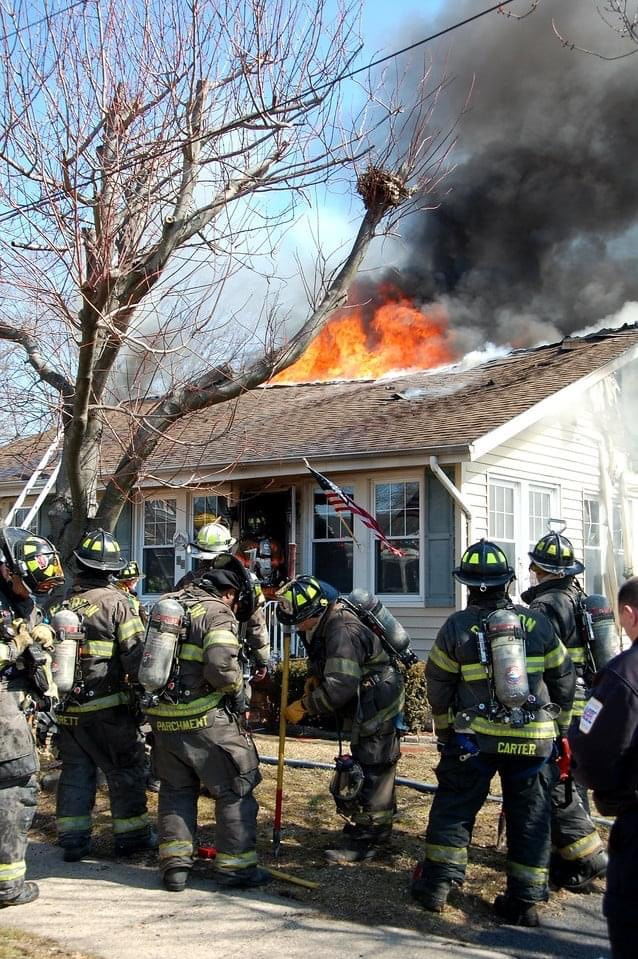